Originally posted at my old blog

There was the ‘Alewife’ or woman who ran a pub. There were ‘Berlin Blackers’ who applied black varnish to iron tools. There was the Chapman who dealt goods from his donkey cart by traveling from village to village. There were Byremen who looked after cows. There were Cork Cutters 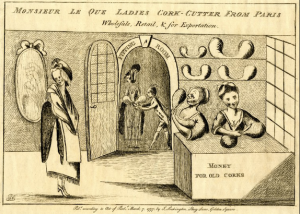 Today’s human looks with disdain on these jobs and celebrates the fact that either they no longer exist, machines do them or ‘other people’ do them. In the Western countries and other wealthy states these jobs have been exported overseas or they have been usurped by machines. Such were the results of industrialization, globalization and the increasing abilities of assembly line robots to do intricate work. There was a time when most people did labour with their hands. But there have been at least two generations, if not three or four, that have separated us from our forbears. Such mundane textile jobs and farm labour is something so remote that most could not imagine it. But society increases daily with more and more people as populations grow (except in Europe).

So as these ‘old’ occupations have disappeared new occupations have had to replace them. Most people, even in this technologically advanced society, must work in order to survive. But given the flaccid nature of people and the fact that so few of them are capable of doing work with their hands any longer society has had to increase the number of jobs that do not require much work. In order to do this we have created a generation of people employed in what was then called ‘services’. One example of these new kind of jobs that have come to replace the ‘Walkser’ and the ‘Dyker’ are jobs described as “Community and External Affairs and Business diversity.” This was the description of Michelle Obama’s job at a hospital for which she was paid $275,000 a year. Michelle Obama might be the posterchild of a generation for whome work is an abstract theoretical concept. Michelle may have grown up in a modest home but she aspired to higher things. She got into Princeton and spent her time there complaining about how racist it was (although the fact that she was allowed to go there seems to belie this claim). She became wealthy through working a variety of non-jobs, non-occupations, for which no work was required and no results could be provided. After all, how does someone measure ‘community outreach’ for a hospital? People are dying everyday, they must go to the hospital. Does one need to outreach to them? In the end Michelle became a bandleader of the movement against occupation. She has publicly stated to college students that they should not “go into corporate America.” Yet at the same time she claims that “Barack Obama will require you to work.”

But what will this ‘work’ look like? This work is entirely predicated on the idea that things that are not real occupations can be subsumed under the idea of what ‘work’ is and then meaningless labels can be dished out to this years college students so that they will all work as ‘grant writers’ or ‘community representatives’ or ‘organizers’ or some other noncupation. In fact that is what these jobs are, they are the opposite of an occupation, they are noncupations. It was inevitable that technology would produce this. Movies about the future made between the 1950s and the present have always shown a future where no one works. People are always portrayed walking around in similar track suits but they never seem to have jobs. If they have occupations it is as some sort of officer or deckhand on a star cruiser.

In ‘Aliens’ the movie the directors created a universe that involved futuristic soldiers, but no one had an occupation outside of the military. What jobs were there in Star Wars. There were all the imperial soldiers of Darth Vader and the people who drove his star ships around. Luke Skywalker’s uncle was a farmer. But those were basically the only occupations shown in the film. People can’t imagine occupations in the future because we have witnessed to many honest occupations fall by the wayside. We imagine a future in which no one works. The present state of society, in which people hold jobs that are not real occupations and in which few if any people use their hands during work (except to type), has created all the need for ‘meaning’ in life. People even volunteer to do old occupations so as to find themselves. They believe that through a few weeks of ‘work’ they will suddenly have an awakening. The need for all this meaning in life may stem from a lack of actual skills in life but the remedy, psychologists, psychiatrists and ‘meditation’ does not seem to bring people any closer to knowing what work once was. People in movies speak of owning farms and living off the land but most are ill-equipped to do so.

The stories of people like Chris Mcandlis in Into the Wild appeal to people because they wish they too could abandon all to live in a pre-modern state of being. The romanticism of the late 19th and early 20th century, both among the Communists and Fascists, saw nations of people working together to build themselves up. These mass ideologies or ‘Sacred Causes’ tried to re-envision a nation of romantic workers and peasants, all happily working as cogs in the machine. Both the Germans and the Soviets romanticized the countryside and each had their ideologies of ‘returning to the soil’. In Russia it was the peasant commune and in Germany it was ‘blood and soil’. Either way it was a reaction to modernity which saw ever more people crammed into cities and the land turning fallow as the agricultural people left it to find work in factories. This was a harbinger of doom for folk tradition. But the solution found in Nazism and Communism was mass industrialization. There was to be no true return to the land. Attempts were made to colonize vast swaths of hitherto useless land as shown in David Blackbourn’s excellent study Conquest of Nature. In essence, however, this was the irony of these mass movements based on a romantic notion of nature: there was no return, merely a conquest of nature and a slow destruction of it. In the Democratic west the conquest of nature proceeded apace with a conquest of the soul that was the result of a lack of occupations being open to the youth. There simply are no more jobs. They have all disappeared.

The fact that the best and brightest in the West abhor the ‘corporation’ and blame all of societies ills on it merely shows the degree to which the wool has been pulled over our eyes. Corporate life holds some of the last actual occupations that are left over from the ancient world. It still has some attachment to the idea of work as a way of life and as an ethos. While small businesses are rightly celebrated as a wonderful part of society few people aspire to work in small businesses. People aspire to the nameless occupations where the real money is. Since people can pull down huge salaries such as $275,000 a year for working as a ‘community relations consultant’ there is no reason to aspire to having a real occupation. Everyday there are fewer and fewer occupations. There are fewer and fewer skills. Everyday people become more and more separated from any sense of their surrounding environment. Karl Marx spoke of factory workers being alienated from their labour but today’s people are alienated from humanity. They are alienated from the environment. They are alienated from nature. They are mindless automatons who have no real skills and cannot even explain what it is they actually do for a ‘living’.