Aaron Keinreich, an officer in the Border Police in charge of research and development, is explaining some of the aspects of his organization’s newest acquisition, the Sand Cat jeep, known as the Caracal in Hebrew. The vehicle, which resembles a huge multiple ton crouching cat, is fitted out with all the bells and whistles anyone would want. But Keinreich is adamant that everything inside and outside the vehicle serve one purpose – to protect the lives of the men inside.

The Caracal was developed to replace the armored version of the Sufa. The Sufa is a well known Israeli vehicle used by the army and the Border Police. Based on a Jeep Wrangler, it has many configurations, one of which is an armored version that weights more than six tons. This ungainly beast was not only small but also susceptible to all sorts of problems.

“It was a good jeep, it was an American jeep, but it became too heavy with all the armor.

The old jeep was even on our insignia. Its armor could protect against bullets and rioting. 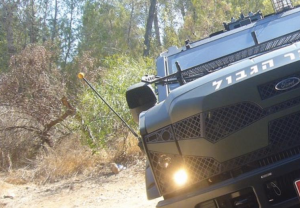 But it was not user-friendly. There was no place to put all the fighters’ equipment, water bottles, ammunition, all the personal effects of the men. It just became a big jumble, a mountain of junk,” explains Keinreich, 45, is a career officer in the Border Police.

“I was in the Yamam [an elite Border Police motorcycle unit] and got a BA from Bar-Ilan.

In 2005 I came to this new unit in the Border Police that works with technology and research and development.”

In 2006 he and a colleague were tasked with looking for a solution to the jeep problem.

“We did research and looked all over the world, and we looked at companies here in Israel,” he says. “We wanted an existing model. We examined what was good about the Sufa, chose what we wanted and set our sights on the most important thing – protecting our people from harm.”

One of the main issues was how many soldiers should sit inside and how they could have a full range of vision. “We decided to have a five-seat configuration: two in front – the driver and the commander – and two in the back. In contrast, the Sufa had two benches in back and two seats up front. Then we wanted a fifth backless seat placed in the middle so that another person, such as a suspect being detained, could be there. Furthermore, we wanted the men inside to be able to see 360 degrees, so we designed the windows with that in mind,” says Keinreich, drawing a little diagram to explain.

Because of their experience with the Sufa, where having all the equipment jumbled together had become a “pile of junk,” he points out that solving this problem was a top priority. “We wanted to figure out what type of equipment had to be inside and what should be outside in storage compartments. We also wanted to get to a good weight so it wouldn’t be too heavy.”

The Border Police put out a tender for the specifications they desired, and the Israeli company Delek Motors won the bid. Delek is the importer of Ford trucks, among other vehicles, to Israel. Delek hired c, a company at Kibbutz Sasa in the North, to armor-plate a Ford F-350 pickup truck and add all the other devices that the Border Police required.

“We almost lived at Sasa during the period, and I had to take trips back and forth to the US,” recalls Keinreich.

The final result is a fascinating hybrid, a dream machine in every sense.

“It took us a year from publishing the tender to coming to a deal. The final version is on the F-350 chassis, but its wheelbase has been shortened [by about 500 mm. and its rear axle altered. After the armor has been put on, and including the people and equipment that are meant to be inside it, the weight comes to 5.227 tons.”

After all the tests had been completed, the jeep went through several months of test driving, and soldiers then offered their suggestions. The first operational model was put into use in December 2010.

THE BORDER POLICE invited The Jerusalem Post to take a ride around the Ben-Shemen Forest to illustrate what the vehicle was capable of. The jeep selected was brand new, with the plastic covering still on the seats. One of the features that was added to the Caracal was special holders for water, helmets and M-16s on the doors. A flip-down screen sits just above and between the driver and passenger in the front so that they and those in the rear can see it. A speaker system allows for those inside to hear people talking outside without opening the doors. To prevent rioters or terrorists from getting into the vehicle, the windows do not open, and the doors have heavy metal locks that bar them shut. The rear passengers each have a small hole that can be opened in case they need to shoot from inside the vehicle, much as on an armored car used to transport money.

This, of course, would be a last resort.

“The soldiers simply love the vehicle. It goes very fast and rides comfortably. Plasan came out of this well also; with Israel’s permission, they are selling it abroad now to Mexico, Argentina and elsewhere,” notes Keinreich.

In the end, about 80 of the vehicles were produced, 20 of which were purchased by the police and 60 by the Border Police. The old armored Sufas are sitting in a lot somewhere, to be used only in case of emergency.

Unlike the IDF, which uses US defense assistance to purchase some of its products, the Border Police bought the vehicles with its own money, to the tune of NIS 700,000 per unit. The total program cost about NIS 50 million. Most of the vehicles are used in the area of Jerusalem, where the police confront the problem of violent riots that also might involve the use of flammable material and live fire.

“You have to understand that when our old jeeps were going into places like Silwan, sometimes they were getting washing machines thrown on them,” explains Keinreich as he shows how a policeman can go out through the back door and crouch on top of a spare tire, between two storage bins that offer him protection.

Furthermore, there is a hatch on top that a policeman can open. The hatch doubles as a shield.

Tzahi Pressman, a coordinator of the driving instructor’s course for the Caracal, drives my photographer and me in the direction of the Ben-Shemen Forest.

“This is where we take the drivers to practice and do their tests,” he says.

It is a relatively short course, since all those who come to it are already professional drivers in the Border Police.

“When we first got the Caracal, we tried all sorts of things with it. For instance, the old Sufas used to flip over easily, and it would take them up to 60 km. an hour. If there was a place they could roll over, they would. By contrast, this machine can go above 100 km/h without that risk,” he says.

The Caracal makes the rider feel like a king, towering above the other traffic. Its suspension exaggerates some of the movements, but it means that the occupants are totally cushioned from the brutality of the outside world.

Off road, the Caracal has two four-wheel drive settings – low and high – and a two-wheel drive option.

Because of the shortened wheelbase, the jeep can navigate quick turns and tight corners, something essential for driving in an urban environment.

“It is a different world, driving this,” says Pressman.

“You really feel like a king. In the old vehicle, we didn’t have air conditioning; and in the winter, there was no heat.”

But not all the kinks have been ironed out. The walkie-talkie, which is used to give orders to those outside the vehicle over a megaphone, doesn’t work. The computer screen built into the dashboard that is supposed to give the driver a view behind the vehicle at all times, uses a new software that is confusing. Dust seeps in as we cascade along the dirt paths, evidence apparently that Plasan left some little gaps somewhere when they remodeled the vehicle. But there is a solution to the dust. With the flip of a switch, a fan built into the roof sucks it out. Because the windows cannot be opened, “needless to say, there is no smoking in the car,” says Pressman.

There are other features. Small lights can be moved and manipulated so the occupants can read at night.

Floodlights on the roof can be moved using little joystick toggles, also for use at night.

The jeep easily navigates up obstacles, over large rocks and down steep terrain, the kind of terrain that other jeeps might make it up and down but would cause the occupants undue discomfort. In fact, this is one of the pertinent issues. It seems that the soldiers inside might become lazy because of the comfort. When asked about this, Keinreich smiles and says, “No, that is not a problem, I promise.”

LATER, WE come upon some people logging in the forest and I remember I’m in a dark green Border Police vehicle. If they are logging illegally, they should be running by now.

“We see them out here a lot. They are allowed to be here,” explains Pressman. And then we see the coffee the loggers have prepared. “Actually, the back part of the Caracal, where the spare wheel is, the soldiers jokingly call this the best place to make coffee because it is sheltered from the wind.”

For now, the name Caracal will remain, even though the beast resembles more of a rhino than a cat. “Sand Cat is the name Plasan chose, not us. But as we say in the Border Police, something temporary tends to be permanent,” says the driver.

For now, those who get a chance to ride in this vehicle, temporary name or not, are lucky indeed.