A year and a half after Israel’s declaration of independence, Dr. Jacob Weinstein, a Jewish Agency official and immigration expert, returned home to Israel from a brief trip to Ethiopia. Previously he had been tasked with negotiating the immigration of the Jews of Yemen. Ingratiating himself with the country’s Muslim leaders and British colonial officials in Aden, he got the leading imam to “allow” the Jews to leave. He wrote in his diary that “the Jews had already been praying for 2,000 years to return to Zion.”

Ethiopia posed a different challenge. There, Weinstein was confronted with an ancient Christian kingdom led by an affable monarch. Ethiopia had abstained during the 1947 UN vote to partition Palestine into Jewish and Arab states. Now Israel wanted to secure diplomatic relations with the African country, one of the few independent states in the region that was not Arab and could be well-disposed toward the isolated Jewish state.

Weinstein had no luck at completing his task in Addis Ababa. Having met with the emperor’s privy council he came away empty-handed; Ethiopia and Israel would not establish relations until 1956. But when Weinstein returned to Israel he was interviewed by a reporter from the Histadrut newspaper Davar.

Brushing aside his mission’s failure he told the journalist that he had learned through sources in Ethiopia that the ancient Ethiopian Jewish community had shown great interest in the nascent State of Israel fasting for 48 hours when they heard that the country was at war with its Arab neighbors. In addition 2,300 Jews had walked for 20 days from their villages to the capital seeking to get to Israel to aid the country in its war. Speaking to a reporter from The Palestine Post, now The Jerusalem Post, Weinstein said, “though this community [of Ethiopian Jews] had been living in Abyssinia for 2,000 years they displayed a lively interest in emigration to Israel. Estimates of the number of Falashas vary from 10,000 to 40,000.”

Weinstein’s revelation that there were Ethiopian Jews eagerly awaiting their return to the promised land fell on deaf ears.

The institutions of the young state, as well as its public, were aware of the Jews in Ethiopia. Through an investigation of the archives of this newspaper several interesting and little known episodes were brought to light.

The first mention of Ethiopian Jews in the Post, almost always referred to as “Falashas,” literally “squatters” in Amharic, or “black Jews,” appears in 1933, a year after Gershon Agron founded the newspaper. In a report on a lecture by Dr. Redcliffe Salaman at the Hebrew University on “the origins of the Jewish race,” Salaman – an expert on diseases, particularly viruses related to potatoes – dabbled in a theory that the Jews were not truly pure Semites, but descendants of the Hittites and Philistines. In his lecture he noted that the Jews of Ethiopia and India (“Cochin Jews”) were descendants of “massive intermixtures.”

This line of discussion, about the racial or ethnic difference of Ethiopian Jews, was of interest to many who wrote about them. A July 1959 Ma’arivarticle noted that after the Law of Return was passed in 1950 there was discussion about bringing the Ethiopian Jews to Israel. The writer, Yuval Elitzur, who had reported from Ethiopia, wondered whether even if the Chief Rabbis accepted the Ethiopian Jews, how Israel would deal with the “problem” of their color.

“It is an ostrich-like policy to ignore the skin color,” he said, like sticking one’s head in the ground. “Even if we don’t have to worry that the people of Israel will behave like the whites of South Africa or the American South, we must consider that bringing all the ‘Falashas’ in a short period of time will create a racial problem in Israel… racism is not based on common sense, but nevertheless we will have a hard time overcoming it. Anyway, Ethiopia will not let them leave.”

The issue of Jews being allowed to leave Ethiopia was one obstacle to their immigration.

Although the Jewish Agency and Israel had successfully overcome this problem in Yemen, little was done to persuade Haile Selassie, the emperor of Ethiopia, to change his attitude toward the Jews.

In November 1935, Tecle Hawariate, Ethiopia’s representative to the League of Nations, gave an interview to several Jewish newspapers. At the time he was pressing Ethiopia’s case before the League because of the Italian invasion of his state. “We consider the ‘Falashas’ our brethren and they are enjoying full equality in our country… they are now proving their devotion by spontaneously volunteering for the defense of the liberty of our country.” Hawariate claimed that there were 300,000 Jews then living in Ethiopia, a number the newspapermen corrected to read 50,000.

The Italian invasion of Ethiopia resulted in around 270,000 dead, some of whom it is assumed were Jewish. As Italian general Emilio De Bono’s army moved cautiously into Ethiopia from Eritrea in November 1935, the Jewish Agency reported that it had received a request from Ethiopian Jewish leaders to immigrate to Palestine. It is not clear what the Jewish Agency made of this request, but it came too late, as Italy’s Fascist forces soon conquered the country.

In an ironic twist, the emperor of Ethiopia came to Palestine after fleeing his country into exile. He did not bring any Ethiopian Jews with him. However, in an interview with in May 1936 he noted that he was glad the Jewish community in Palestine was showing an interest in his country’s plight. In June of the same year the Italian consul in Jerusalem said his government was doing everything it could to “put the ‘Falashas’ on a proper footing” by opening schools in their district. Some Jews were even brought to Rome to study at university.

This was several years before Mussolini signed the infamous “Pact of Steel” in which he allied Italy with the Nazi regime. In 1939 Italy ordered the Jewish community’s “dissolution,” closing schools and firing Jewish officials.

Despite the hardships endured by Jews in Ethiopia, one of the more shocking events was still to come. In June 1937 Poland had recognized the Italian conquest of Ethiopia. For an unknown reason it was reported that “some of its Jewish subjects have requested permission to settle in the African state.” Why Polish Jews sought to flee Poland for Ethiopia, a country where they would have had marginal prospects, was unclear, but it seems that some of them did make their way to Addis Ababa, prior to Hitler’s invasion.

In May 1941 British forces with their Ethiopian allies drove the Italians out of Ethiopia. Several South African Jews had served with the British forces and met Ethiopian Jews during the military campaign.

When they arrived in Cairo in August they told reporters that there had been “great rejoicing” among the Jews of Ethiopia who were “the first Jewish community liberated from totalitarian persecution.”

In May 1942 the emperor appointed a Jewish representative to London, Abraham Abram. Beginning in that year Abram held meetings with Harry Goodman, the British secretary of Agudath Israel World Organization, a political arm of Orthodox Jewry, and told him of an idea then circulating among Ethiopian Jews; that they might aid their brothers in Europe by helping them immigrate to Ethiopia. In August 1943 the Post reported that “a leading member of the ‘Falasha’ community expressed to the emperor the desire to assist European Jewry and to welcome them in ‘Falasha’ towns.” As we now know, it was already too late, as the decision to destroy the Jews of Europe had been taken at Wannsee in 1942, and there was little escape by 1943. But this remarkable revelation, that the Ethiopian Jews reached out to help the Jews of Europe in their darkest hour, reverses the general historical view that Ethiopian Jews always needed to be saved by others.

In the end it should be recalled that it took the chief rabbis of Israel until 1973 to rule that the Ethiopian Jews were Jewish and it took another four years before the advent of a Likud government under Menachem Begin, for the State of Israel to assist in their immigration. Yet, 30 years before, when Ethiopian Jews had heard that a Jewish state had declared independence, they had, as the Prophet Jeremiah commanded, stood up and girded themselves for war, trusting in the proverb, “Your enemies will fight against you, but they will not prevail” (Jeremiah 1:19).

The writer has an MA from the Hebrew University and works for the government. She came to Israel with Operation Moses in 1985. Translated by Seth J. Frantzman. 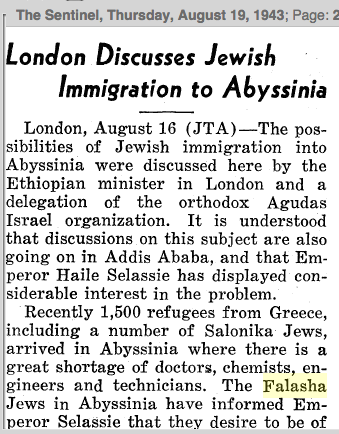