A new bill that passed the Knesset’s Ministerial Committee for Legislation would allow for preferential treatment of those who complete compulsory military or national service, and is being criticized for discriminating against Arabs and haredim (ultra-Orthodox). Meretz MK Zahava Gal-On noted that those who serve “are in no need of affirmative action,” while the Mossawa Center for Arab Citizens complained that the bill was “racist and discriminatory.”This bill goes to the heart of an essential misunderstanding of discrimination in Israel, and the focus on the harm that it will do to the Arab population is being used to shift our attention from the real interests at work in not allowing those who are forced to serve to receive any benefits.The bill allows for preferential hiring in civil service jobs, preference for housing in dorms and affirmative action in higher education programs. Arab citizens of Israel already receive affirmative action in higher education and civil service jobs, so the notion that they will be discriminated against by such a bill is absurd.Currently an Arab and a Jew growing up next door to each other live equally until age 18, when the Jew is forcibly conscripted to the army. Then, for almost three years, the Jewish citizen serves while the Arab citizen may take up vocational training or attend college. When the Jewish citizen leaves the army she is already several years behind in terms of qualifications. When she applies to higher education she isn’t competing against her Arab neighbor, because he has already almost completed his degree. Even those Arabs whom she might compete against in the civil service receive affirmative action; thus for her to receive points for having served would only make them equal in the eyes of the employer.The only discrimination this bill actually results in is between Jews who don’t serve and those who do. Currently almost 40 percent of Jewish women and 25% of Jewish men do not serve in the army. Haredim (ultra-Orthodox) constitute a minority of Jews who don’t serve. So the real competition in higher education, dormitory housing and civil service that this bill affects is between secular Jewish citizens who serve and secular Jewish citizens that don’t.This reveals the real reason for opposition to the bill; most of those who oppose the bill on the Jewish Left, such as Meretz voters in north Tel Aviv, come from higher socioeconomic backgrounds and they don’t want their wealthy colleagues to have to compete with the poor, who serve, for jobs.They argue that those who serve don’t need affirmative action. According to Dan Ben- David’s State of the Nation report from the Taub Center, the average income of those with a college education is almost double those without. Citizens from educated, wealthy backgrounds are in a sense opposing benefits for those who serve from poor backgrounds.Is it because they don’t want the playing field leveled so that a child from a poor development town like Kiryat Malachi and a child from wealthy Kfar Shmaryahu will have an equal chance of attending university? Already the poor in Israel suffer huge gaps in education and social mobility, and benefits for army service provides one method of helping them enter higher education and obtain stable civil service jobs. Forcing them to serve and then denying them any benefits leaves them in a cycle of poverty. 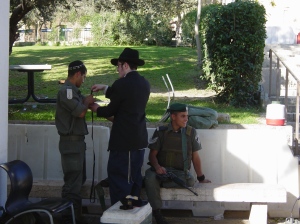 ARMY AND national service present a much larger economic burden on the poor than it does on the wealthy. Benefits for service constitute advantages wealthy people already have, but for the poor such things as free tuition makes the difference between receiving a higher education and not. Rather than being a melting pot, the army and lack of fair benefits is increasingly playing a roll in harming the economic prospects of many.Poor Jewish communities in Israel have higher rates of enlistment in the army than wealthier ones. For instance, 91% of male Ethiopian Jews serve in the army. The same figure for middle class Jews is 75%. When one looks at combat soldiers, who receive added benefits, the figures are even more striking. One of the wealthiest community in Israel, Kfar Shmaryahu, sent only 11 youths to combat units in 2012, less than 5% of those eligible to serve. Under the current system Jewish citizens from poor backgrounds are drafted into the army and receive around NIS 300 a month for their service, which works out to about NIS 0.50 an hour. The wealthy tend to serve in army units that further their careers, such as the air force, intelligence, army radio or the army’s hi-tech unit 8200, while the poor are sent to the Border Police or serve as clerks. The low pay and differing jobs furthers the long-term negative economic impact of service.When they leave the army they face the prospect of passing standardized tests to get into college, which the wealthy can easily afford prep-courses for. The soldier who has been paid a near-slave wage for several years now faces the unwelcome prospect of trying to pass exams she is ill-prepared for, and then has to find the money to attend universities which cost around NIS 8,500 a semester. Here again benefits could help narrow the gaps and provide those who served for several years free tuition and free housing in dorms.The idea that helping former soldiers to get jobs in the civil service somehow discriminates against anyone is ludicrous. As noted above, Arabs receive affirmative action in civil service. Former soldiers enter the civil service three years late and at a starting salary of around NIS 4,000 a month. To provide one example, a woman I know served as an officer in the army and has an MA from Israel’s most prestigious university, and she receives NIS 4,500 a month in take-home pay for her job in the civil service, after working there for five years. Consider that rent in Jerusalem can be NIS 3,000 for a small apartment a half-hour bus ride from the city center.This means a woman who gave three years of her life to the country and worked for six years to get an MA cannot even afford an apartment.And this is the woman Meretz MKs and others want to deny benefits to. Denying benefits means denying those from lower socioeconomic backgrounds the ability to ever live a life of dignity with an apartment, car and a decent wage.Israel needs a law modeled after the US GI Bill. The GI Bill provides free tuition for those who serve their country. In the years of the draft it greatly aided social mobility. For instance, 7.8 million veterans returning from the Second World War went to college under the bill.

A reserve solder on Ben-Yehuda street in 2007 (Seth Frantzman)

In Israel we need to integrate Arabs into the civil service and provide them benefits as well. But these benefits can go hand-in-hand with programs that aid those who serve in the army, especially those from poor backgrounds.WE SHOULD start by paying soldiers a reasonable wage and making sure that those who serve get preferential treatment in housing and higher education – not to put them above Arabs who are not drafted, but to put them above the 30% of Jews in Israel who choose not to serve.We need to level the playing field between Kfar Shmaryahu and Kiryat Malachi. It can’t be that 90% of the poor go to the army in some locales and can’t get jobs or go to college, while their peers who don’t serve go to college earlier and receive a massive boost in relative earning power.It is ironic that the wealthy voices on the Left opposing this bill themselves succeeded partly because of the benefits of wealth and education bestowed upon them by their parents’ generation. We need to make sure that Israel is not only a country for those born on kibbutzim, but also a country for those in Shfar’am and Hadera, from whatever background.If the country discriminates against its citizens by only drafting half of them (currently 45% of Israelis do not serve in the army), then it can also discriminate in favor of those who serve, whether through choice or obligation.