The waterfront at Cape Town is a reminder of some of the many contrasts in South Africa. Only two dozen miles from the teeming township of Khayelitsha on the Cape Flats, the shopping center and redeveloped port represents tourist infrastructure at its best.

With outdoor performances and a variety of shopping venues, including a hiking store that has a “freezing cold room” where one can try on jackets, it offers hours of enjoyment.

It also has historic appeal; here is where Nelson Mandela embarked for his two-decade sentence on Robben Island, with a museum now marking the site. My wife and I recently visited South Africa for a Limmud conference, which provided us with the chance to visit the country’s three major cities and do some touring. With the rand decreasing in value, the country’s excellent tourist infrastructure and the diversity of appealing experiences, South Africa is worth a visit. Cape Town, founded in 1652 by Dutch colonists, incongruously faces north in a lip of African coastline that juts down forming the Cape Peninsula, so far south that penguins can be found on its beaches. The town itself is situated in a bowl framed by the famed Table Mountain.

Here one can also see one of the legacies of Apartheid, District Six, once a multi-ethnic area that was cleared of its inhabitants by the old regime. The Table Mountain cableway was closed when we were there, so we opted for a drive around the area. A short drive out of town brought us to Camps Bay, a posh beachfront community. We drove east over the hump of the peninsula and there, abutting the Tokai Forest nature reserve, is the beautiful Groot Constantia winery. The winery was founded in 1685 and is housed in splendid old white buildings with traditional cape Dutch architecture. The main feature consists of crenellations and gables above the central door of the building.

Outside the winery visitors are warned not to picnic on the grass, lest baboons be attracted to the food. Inside, the visitor is greeted with a long and storied history, which claims the wine was shipped to Napoleon while he was in exile on St. Helena. One can imagine a worse way to spend their days than swilling back the robust fruity reds or their Cape Ruby Port.

Today, the winery is run by the government through the Groot Constantia Trust, established in 1973, which seeks to preserve “South Africa’s oldest and best-known wine estate.” Tastings are R30 per person for five glasses of wine, and the pours are generous – little wonder the Cape’s wine country is a wellweathered tourist track.

Like Icarus just prior to his regrettable flight, a statue of a horseman and his steed stands perched above Cape Town. The back muscles of the statue’s rider bulge, catching the afternoon sun. The monument is part of a large classical Greek building that commemorates the role of Cecil John Rhodes in South Africa’s history. Rhodes, the lifetime bachelor turned businessman and imperialist adventurer, stood at the center of South African politics in the second half of the 19th century.

He not only bequeathed to us the Rhodes Scholarships and the former name of Zimbabwe, Rhodesia, but also the grounds of the University of Cape Town. His legacy and that of the area’s British colonial period can be seen at the Kirstenbosch National Botanical Garden, not far from the memorial.

Considered one of the world’s best, it sits beneath the approaches to Table Mountain and includes local varieties of plants. It owes its origins to Harold Pearson, who held the chair of botany at the nearby South African College. It has more than 7,000 species of plants and sits on 36 hectares (about 89 acres). An excellent restaurant, the Kirstenbosch Tea Room, overlooks the gardens and serves Israeli favorites such as shakshuka (R66) and a “Middle Eastern” sampler with tasty felafel, eggplant and tabouleh (R78).

South Africa presents the traveler with a vast, diverse canvas. From the deserts of the Karoo to the beauty of the Wild Coast in the Transkei, with its rolling hills and small Xhosa villages, one is tempted to drive. But the distances can be great. Instead, a short flight from Cape Town to Durban is an option. Kulula Air operates inexpensive flights within the country. The airline is known for the sense of humor of its in-flight announcements, where, for instance, passengers are greeted on takeoff with an explanation by the pilot that “this is my first time flying and my co-pilot is in training.”

We found Durban to be a city that had seen better days. As with other places in South Africa, the locals – including the large Indian community – live under the shadow of crime. Streets seem near-deserted in the northern part of town. A beautiful stadium constructed for the World Cup contrasts with the urban blight around it.

We opted to rent a car here and travel north through Pietermaritzburg. The toll highway winds up through rolling hills. At a steady 120 kph, one can cover a lot of ground. North of Durban one transverses the scenes of some of South Africa’s fascinating history. To the east lies the homeland of the Zulu, one of the country’s largest African tribes. The Zulu fought a tough and bloody war against the British in 1879, and skirmished with Afrikaner pioneers who had fled British authority in the Cape in the 1830s. War buffs can spend days checking out the battlefield sites in the area. From more recent times, one can also find the site of the capture of Mandela in 1962. Finishing touches are being put on a new museum and monument. Currently, entrance is free.

ONE OF the great joys of exploring South Africa is staying at a game lodge. These range in prices from upwards of $200-$1,000 a night. We chose to stay at the cheaper Springbok Lodge on the Nambiti Private Game Reserve (R1,395). The 10,0000-hectare (about 24,710-acre) reserve has “the big five” African animals. Rangers remind visitors that the term comes from the period when hunting big game was typical, and elephant, lion, Cape buffalo, leopard and rhino were considered the five most difficult or dangerous creatures to hunt on foot. 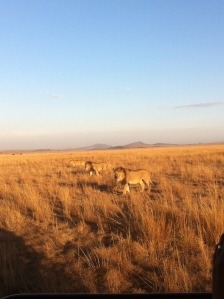 On Safari at Springbok Lodge in Nambiti (Seth J. Frantzman)

Since the modern game reserve doesn’t involve hunting or usually, walking on foot, the term has less meaning. After all, the graceful giraffe, the oddly striped zebra, the eland, which grows to more than a ton, the wildebeest and the hippo, are all equally stunning big game. Our lodge offered multihour game drives at 6 a.m. and again at 3 p.m. Animals, especially predators, are more active at these hours. Most of the time we seemed to spend trying to find the lions on the reserve.

Finding seven large cats among thousands of acres is quite difficult, although with 10 lodges on the reserve and their attendant rangers driving around, eventually someone is bound to come across them and inform the others. The feeling of being in an open-air jeep with large predatory cats a few meters away is nerve-racking. The rangers at Nambiti don’t seem to be armed and they caution visitors to not make sudden movements, such as standing up to take photos. “The animals are used to the shape of the vehicle,” explained ranger Mike. If lions circling a jeep full of tasty tourists isn’t strange enough, being several meters from a bull elephant is also a sort of life-changing experience. As if to show his power, the elephant, named “Beefy,” wrapped his trunk around a small tree and then crushed it with his right foot. Was the message “I can crush you too”? Game reserves across southern Africa are facing difficulties, with the death and poaching of cheetah and rhino. In both cases, the experts we met claimed the creatures might disappear from the wild as early as 2018.

This forecast appears overly gloomy for animals that number in the thousands in the wild (estimates show around 7,000 cheetah, 17,000 white rhino and 3,000 black rhino). Rhino, however, are being slaughtered by poachers. In recent examples, men have choppered in and with the help of a veterinarian, tranquilized a rhino and cut off its horn. The trauma caused by the poachers usually kills the animal. Today, Nambiti preempts these attempts by cutting off the horns in such a way that the animal is not harmed.

Cheetah face a stranger fate. They are being killed off by their fellow predators, lions and hyenas. In one case, dozens of cheetah were slaughtered by lion at a game reserve. At Nambiti, only one cheetah remains. A project at the reserve, called Kwa Cheetah Breeding, breeds cheetahs for reintroduction to the wild. Visitors are invited to meet the animals and even pet some of them.

This is also an exhilarating experience, sitting with an 80-pound cat that the manager of the project explains can break the back of the antelope when running at a top speed of some 80 kph. These cheetah seem consigned to sitting all day and enjoying pampering by visitors. South Africa offers a great diversity of game reserves. Some, like Kruger or Pilansberg, allow the visitor to drive around them and search for the animals. This gives one the sense of freedom, but doesn’t provide them with access to rangers’ expertise in finding some of the game that is harder to spot.

For instance, Kruger National Park is about the same size as Israel, with around 13,000 elephant and maybe 2,000 lions in the entire park. In comparison, much smaller Nambiti forces visitors to park their cars at the entrance, where they are transported to their individual lodges. Initially disconcerting, as one feels like a captive in the lodge, we never felt a minute of boredom. The food was plentiful and exquisite – though we couldn’t get used to the fact that when the menu said “venison,” it actually meant meat from impala, kudu, eland or some other animal one had just seen on the game drive.

Rooms, described as “tented accommodation,” consisted in fact of a large rectangular tent, but had a fancy wooden armoire and bed in them, in the same style Ernest Hemingway or Theodore Roosevelt might have camped while on safari. The tent was equipped with hardwood floors, a complimentary bottle of sherry, a large bathtub and a rock-cut outdoor shower. While at dinner, an attendant would switch on the electric sheets so the bed would be warm in the African winter.

On our last night, when we came back from our three-hour sunset game drive, a bathtub was filled and rose petals sprinkled about. Such personal attention at one of the cheaper game lodges means the pampering must only get better at others. For those in search of wildlife and history, South Africa offers a plethora of experiences.