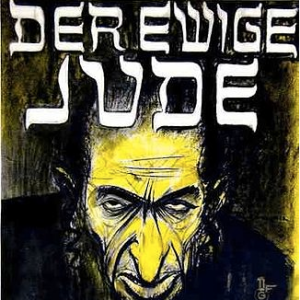 (This column was originally published in The Jerusalem Post, March 20, 2014)

On November 29, 1940, the film Der Ewige Jude (“The Eternal Jew”) opened in theaters across the Third Reich. It was a product of Josef Goebbel’s Ministry of Propaganda and was produced by Fritz Hippler. The film was formulated as a documentary about Jewish history.

The Nazi party publication Unser Wille und Weg lauded it as “providing a broad treatment of the life and effects of this parasitic race using genuine material taken from real life.” The film can be easily found online with English dubbing (see full video at bottom) and its timeless importance, as an artifact of anti-Semitism, should not be ignored. To be sure, it formed part of a larger propaganda effort, along with anti-Semitic films such as Jude Suss and other pieces of Nazi “education.” But what makes Eternal Jew important for us today is that it provides an immediately accessible lens through which we can analyze current debates, to better understand that anti-Semitism remains a potent force. What will surprise many is the degree to which the Nazi stereotypes of Jews are not so different than current stereotypes alive and well in polite society today.

One of the interesting scenes in the film shows a Jewish family at dinner, which the narrator claims is footage from a Jewish cultural group about Purim.

“The following is a Jewish Purim festival…this harmless looking family celebration commemorates the slaughter of 75,000 anti-Semitic Persians by biblical ancestors of our Jews of today… educated Germans who are objective and tolerant, regard such tails as folklore, but that is the race of Israel rubbing its hands over a feast of revenge…today’s Israelites hide their murderous nature.”

The use of Jewish religious themes to defame Jews is a common trope in European media. For instance, in August 2006 author Jostein Gaarder wrote an article in Norway’s Aftenposten, claiming that the notion of being the “chosen people” guided Israelis to do murder;

“To act as God’s chosen people,” he wrote, “is not only foolish and arrogant, it is a crime against humanity. We call it racism…There are limits to our patience and there are limits to our tolerance. We do not believe in divine promises as a rationale for occupation and apartheid. We have left the Middle Ages behind. We laugh with embarrassment at those who still believe that the god of the flora, fauna and galaxies has chosen one particular people as his favorite, and given them amusing stone tablets, burning bushes and a license to kill.”

In a January op-ed by writer Eamonn McCann in the Irish Times, the author claimed “[Ariel] Sharon’s ruthless determination to cleanse the land of Israel of Palestinians was not rooted in analysis of contemporary reality…but in the first instance as a duty conferred on the Jewish people by Yahweh.”

Deborah Orr wrote in the Guardian in October 2011, after the prisoner trade for Gilad Schalit, that the fact that so many Palestinians were traded for one Jew, “acknowledges what so many Zionists believe – that the lives of the chosen are of hugely greater consequence than those of their unfortunate neighbors.”

Leora Eren Frucht, an editor at Haaretz.com, wrote an op-ed in her newspaper on March 16 that shares some similarities with the narrative presented in the 1940 film. She claimed the Purim story was about how Jews;

“went on to kill 75,000 of them, including women and children – them being Amalek, our archenemy. The many interpretations, justifications and fancy philosophical footwork invested over the centuries to make this sound okay have never made me feel any better about it. It’s genocide. And genocide always begins with crude generalizations about a whole people.”

She then generalizes about Jewish people and Purim, claiming a “price tag” attack in Jaljilya, an Arab town, was perpetrated by those who “belong to my people.” 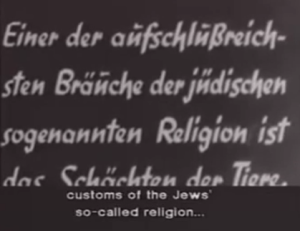 ANOTHER DISTURBING topic covered in the propaganda relates to Kosher slaughter. At the 57-minute mark the documentary has a warning of “actual scenes, among the most horrifying ever captured… so that our people know the truth about Jewry… sensitive citizens are advised not to watch.” What follows is footage of ostensibly Jewish men slitting the throats of cows. The narrator claims:

“supposedly their religion forbids Jews from eating ordinarily butchered meat… so they let the animals bleed to death while conscious…Jews deceptively call this the most humane way to slaughter…European science has long acknowledged the torturous character of this type of slaughter… Jewish law has no love and respect for animals in the Germanic sense…the national socialist movement has opposed this cruel torture of defenseless animals.”

It is interesting that this same argument, that Jews are “cruel” to animals, is common in modern debates to ban kosher slaughter. On March 16, The Daily Mail published an article claiming “meat from cattle slaughtered in ‘cruel’ kosher ceremony is in your high street burger.” The article claimed that the Jewish method of slaughter, “the practice of slitting an animal’s throat and allowing it to bleed to death” had been described as “inhumane” by vets. The article asserted that Jews view part of the cow as “unholy” and that butchers sell “these ‘unholy’ parts to British suppliers.”

The Nazi propaganda film doesn’t address circumcision, but this practice is also targeted by motifs that view it as “cruel” and “foreign.” 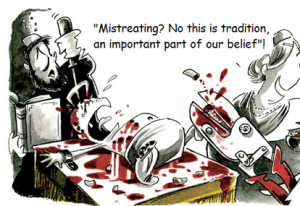 May 2013 Cartoon in The Norwegian daily newspaper Dagbladet.

In a short passage in the film, the narrator also quotes German composer Richard Wagner, who claimed, “The Jew is the demon behind the corruption of mankind.” This is especially interesting because of the current attempts to revive Wagner’s reputation and hide his anti-Semitism. A commemorative event for Wagner’s 200th birthday held at the Jerusalem Theater was the scene of a one-man protest in December of 2013. Reuters claimed that a “crazed Israeli protester” disrupted the event.

ONE OF the most popular tropes in the documentary is the view that Jews are filthy people devoted to chicanery. “Jewish home life reveals remarkable lack of creative ability to civilize… they are filthy… seldom are Jews found doing useful work.” The narrator claims:

“The Jews are a people without farmers or workers, a race of parasites.” The word “parasite” is used often; “the parasite nation of Judah is responsible for a large part of international crime.” Jews are said to “cheat the state of millions.” Religious Jews are targeted often, with one video showing a Talmud Torah classroom, and arguing “the rabbis are not peaceful theologians but political educators, the politics of the parasite race are carried on in secret.”

These anti-Semitic stereotypes of Jews have found a welcome audience among some of those who claim today that haredi (ultra-Orthodox) Jews are “parasites” who “do no useful work.” Julian Kossof, a senior editor at The Telegraph, penned an article in 2010 claiming, “ultra-Orthodox Jews are holding Israel to ransom.” He claimed that “huge swathes of economically inactive adults [are] undermining the state itself.” They were presented as cunningly avoiding their duty; “Military service and paying tax may be duties of citizenship the haredim manage to dodge.”

Like the narrator in the 1940 film, they are presented as conniving in secret; “Beyond their closed world there is nothing else of interest – no art, no science, no culture, no history, no innovation, no progress.” Kossof proudly recalls that his grandfather once pushed a haredi man and called him a parasite.

The term “parasite” was used by an Israeli radio talk show host just last year, and by Deputy Finance Minister Mickey Levy of Yesh Atid (he subsequently apologized). Writing in The Middle East Report in the winter of 2013, Benjamin Beit-Hallahmi claimed that “to most Israelis, the military exemption is another example of the ultra-Orthodox parasitic lifestyle, connected with images of historical Diaspora existence.”  The way in which a portion of Israelis, and commentators, have adopted this narrative of a “parasite” slander and castigates large segments of the Jewish population as having a “Diaspora,” “non-working” mentality is shockingly similar to the sentiments expressed in The Eternal Jew. Although a return to the land and a newfound respect for farming were integral to the Zionist movement, there is no reason for mass media to accept the anti-Semitic trope that targets Jews as parasites.

There is one last line in the film that is worth noting. The narrator claims that “Jews moved to Palestine and looted the culturally superior rightful inhabitants.” He is referring here to the period of Exodus, but this notion that Jewish immigrants to Palestine were “looters” who expelled “indigenous inhabitants” is at the heart of today’s anti-Israel rhetoric.

What Eternal Jew teaches us is that it is important to always recall how anti-Semitism, in images and discourse, works on many levels. Some may seem benign; but we should be wary of all of them, especially in our own society. Critique is important, but not at the expense of falling into the abyss of equating the Purim story to genocide, stigmatizing haredim as “parasites” or honoring anti-Semites like Wagner.