In a new article with Mati Wagner; we interview Israelis who support ending the draft and creating a professional army:

Check it out at Tablet

MK Moshe Feiglin is joined by a handful of journalists, academics, and backbench lawmakers arguing in favor of a professional army for a variety of reasons—including some who support the idea because eliminating mandatory service could remove a barrier for integration of Israeli Arabs into the upper echelons of society. Accepting it would mean letting go not just of the social role played by the IDF, but of a certain romantic idea of Israelis as a nation of warriors. Yet, Feiglin argues, it’s an idea whose time has come. “It is hard for young people to abandon the [people’s army concept] because the ethos of security is to be part of the tribe,” he says. “But you don’t need a genius to see we don’t need it.” 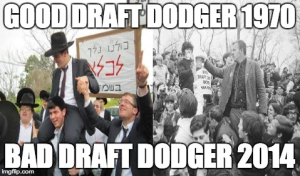