Fuad Zuabi was in mourning.

His cousin, Detective Saleh Zuabi, had been killed a week and a half earlier. But work duties as a policeman called. A recently appointed sergeant, he was patrolling the same area of Haifa at six in the morning where his cousin had been killed, along Nazareth Road, when two men approached him. One cursed him in Arabic and then both drew revolvers and shot him seven times. Fuad didn’t die there; he was taken to the government hospital in Haifa, where he struggled for 12 hours. By the time he died, two others had also been murdered around the country. Yitzhak Yitzhaki, a Jewish craftsman, was stabbed to death by two men near Beit Hakerem in Jerusalem. At Hanita, in the northwestern Galilee, a dozen armed men fired on several policemen guarding the Jewish community. Ezekiel Muncik, a 25-year-old from Kfar Yona, and local community member Abraham Katz were wounded. Placed in an armored car, they were driven to Hadassah Hospital in Haifa. Along the way the car was also shot as it neared the Arab village of Bassa, near Nahariya. Locals said the battle with the attackers lasted three hours. It was May 22, 1938. Another day in British Mandatory Palestine at the height of the Arab revolt.

Israel is a country of battlefields. When Samson was fighting the Philistines he hid in a cave called “the rock of Etam” (Judges 15:8). It is thought to correspond to the large cave that overlooks the railroad tracks leading to Jerusalem just northeast of Beit Shemesh. A short hike, if one manages to successfully vault the polluted Nahal Sorek, one can walk up the hill to it. At Hattin in the Lower Galilee, one can see the field where the Crusader army met its fate at the hands of Saladin in 1187. In Beersheba there is a pretty park with a bronze statue of an Australian lighthorseman that commemorates the raid on the city in 1917 that helped turn the tide of World War I in favor of the British as they swept the Turks out of the country.

As Israelis celebrate Independence Day many people will want to go out and about in the countryside, or have a barbecue in some of the city parks. There are a plethora of sites that relate not only to the War of Independence but also to the immediate pre-state period, when the Hagana fought a defensive war against Arab militias in the late 1930s. Many of these sites are overlooked, overgrown and in some places forgotten.

Around Jerusalem You could live in the holy city a whole lifetime and still discover the numerous sites connected with the defense of the city in the period leading up to independence. In Yemin Moshe and Mishkenot Sha’ananim, a keen observer can still find, with some difficulty because they have been overgrown with vines, the concrete defenses built by the Hagana in the 1940s. It can be located by walking north from the windmill towards Paul Emile Botta Street and keeping an eye on the right side of the path.

A pillbox on the railway line near Malha

A February 11, 1948, article in The Palestine Post recalled that “a well equipped and well trained Arab gang tried for six hours to occupy Yemin Moshe… it was checked with heavy losses by Jewish defenders.” The article describes how 150 men, many from Hebron and led by a man named Sheikh Yassin Abu Bakhri of the Old City, took up positions at Jaffa Gate, below Abu Tor and in the old Bishop Gobat school on Mount Zion. They fired on people in Yemin Moshe, killing Shmuel Toisik, who was bringing food to the children in the community. The account observed that “the gangsters were allowed to approach until pistols could be used” and they threw grenades into the houses. It reminds us how much of Jerusalem lived under terrorism and siege from the passage of the Partition Plan in November 1947 until the end of the war in 1949.

On Mekor Haim Street, at No. 42, there is a small isolated synagogue nestled among apartment buildings. It sits across from the Israel State Archives building that is undergoing renovations. Fortified parapets on the top of the house are evidence of the hardship the area suffered in early 1948. On January 11 the Jewish community, at the time situated between several Arab neighborhoods, was attacked by a dozen gunmen. Snipers in Baka shot Moshe Silberstein and Haim Halbreich. In the fighting an Arab woman named Zachariah Wa’ari and Emil Iskandar Khoury, a Christian Arab from Katamon, were also wounded. Abdul Haim Ishbeid, from what was then the Arab village of Ein Karim, was shot while driving a government ambulance trying to evacuate Jewish casualties. 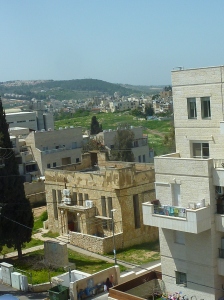 The house in Makor Haim

There are several other sites around Jerusalem that illustrate the intensity of the fighting. A pillbox at the bottom of Gaza Street (Tchernichowsky Street junction), and another on Hebron Road (No. 180 near the turnoff to Ramat Rahel) show not only how the British Mandate authorities had to build defenses throughout the city, but also illustrate the severity of the conflict. Soldiers huddled behind the armored towers, while many civilians were killed in combat. On Highway 1, the Museum on the Seam has preserved many of the concrete modifications done to the building during and after 1948 because it faced Jordanian east Jerusalem. Sniper positions and observation points were incorporated throughout. Elsewhere in Jerusalem, the city has put up blue metal plaques indicating many of the sites of the battles for Jerusalem in the Mandate period. On Jaffa Road, at the junction with Shneur Cheshin Street, is one example, as well as at the King David Hotel and on Hapalmah Street a the junction with Haportzim Street. 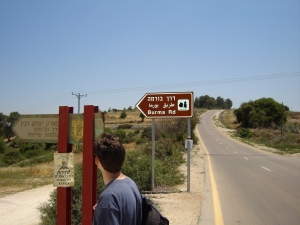 TO GET out and do some walking, the Burma Road historical sites offer a fascinating way to literally walk the route that relieved the siege of Jerusalem in 1948. A good starting point is the Harel observation tower along Highway 44; the turnoff is a kilometer east of Kibbutz Harel, about a 20 minute drive from Beit Shemesh. A dirt parking lot is situated near a watchtower that gives a commanding view of the area. One can see Latrun and the nearby monastery. During the war, Arab militia conquered many of the hills on the road to Jerusalem. After May 15, the Jordanian Arab Legion occupied the large British police fort at Latrun. Several attempts to break through using armored convoys prior to the declaration of independence were met with limited success and high casualties. On the north side of Highway 1, near the Shoresh turnoff, is a series of old armored cars. Several explanatory signs provide a history of the convoys; and those who don’t mind walking downhill a bit can see the jerry-rigged armored cars up close; a testament to the privation the Jewish community faced in the spring of 1948.

There was no way to get to Jerusalem to supply the Jewish community. In mid-May, when it became clear that Latrun could not be taken by the nascent Israeli army, construction of a mountain road to the south began, eventually taking the name Burma Road, after the circuitous route used to supply China in the Second World War. It was the brainchild of David (Mickey) Marcus, an American volunteer with the IDF.

Travelers today can hike the entire trail up to Jerusalem, or the other way, and there are various explanatory signs along the way, complete in some places with metal tank traps and signs relating to the Palmah, the elite strike force of the pre-state underground. A visit to the Armored Corps Museum at Latrun is worthwhile, to get an idea of how this strategic fort made the road to Jerusalem impassable. Not until after 1967 was this area taken by Israel.

ON MAY 31, 1937, residents of the British Mandate awoke to news that the British had hired an expert policeman to design a series of fortifications for the government. Sir Charles Tegart, adviser to the Palestine Government on suppressing terrorism, had been hired to design a network of forts and fences to put down the Arab revolt. His plan called for laying 80 km. of barbed wire fences and pillboxes along the Lebanese border; destroying fords of the Jordan river and constructing massive concrete police forts. It is often forgotten, but the fence also ran from Tabgha, a Christian site on Lake Kinneret (the Sea of Galilee), to Rosh Pina, to keep people from crossing the Golan to attack Jewish communities. There is still a pillbox at Amiad on Highway 90; enter the kibbutz and follow the road around to the southwest corner of the community (signs for Khan Jubb Yosef). The Tegart fencing along the Lebanon border has been replaced today, but there are pillboxes along the border at Goren and Avivim.

The most memorable contribution of Tegart is all the massive forts he constructed, such as the one at Latrun. Many of them are still used by the Israel Police such as those in Beit Shemesh and Hadera. But there are several that serve as museums. Besides Latrun, the enormous fort at Gesher on the Jordan River near Beit She’an is worth a visit, as is the smaller one above Abu Ghosh; Nabi Yesha Fortress (Metzudat Koah) overlooking the Hula Valley (Highway 899 near Ramot Naftali) also has a series of commemorative sites associated with it, as does the Givati Brigade Museum (Yoav fortress) on Highway 35 east of Ashkelon. 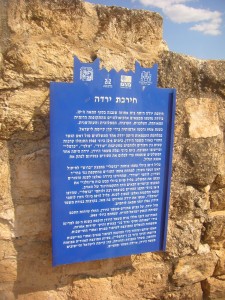 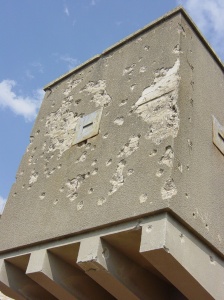 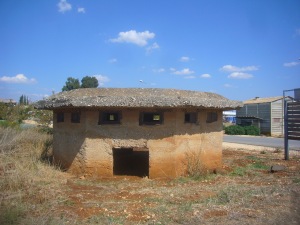 The list of places to see that are connected to the War of Independence is almost endless. Unfortunately there is very little in the way of self-guided tours. Several years ago a book was published in Hebrew relating to Hagana and army memorials in Israel. But it had a low print run and it is difficult to find. Israeli atlases often show many sites from the war, including museums, that one will not find on Google Maps or their smartphone apps. Websites are little better; the Palmah website’s link to memorial sites is broken. Many of the lesser-known sites, such as the Ad Halom Bridge (Highway 4, at Shtulim turnoff, Road 3703) battle site near Ashdod, or Yarda, where a vicious battle with Syrians on June 10, 1948, near Mishmar Hayarden (accessed by a dirt road just east of the kibbutz), took place, are not well marked. Other relevant sites, such as the beautiful Hassan Bek Mosque, whose tall minaret was used as a sniper position to terrorize people in Tel Aviv in February 1948, are not memorialized. Some tour guides offer specialized tours of the Independence War battlefields.

The intrepid traveler, however, should have no trouble locating many sites throughout the country. It is well worth it. As the war fades from memory many parts of it become myth or tainted with the moral judgments of the present. A visit to some of the sites, where the pock-marked bullet holes still stand, from the walls of Jerusalem’s Old City, to Latrun and the concrete armored position in Safed’s old Jewish quarter, to see what the Jewish defenders faced when the war’s outcome was still in doubt, is a worthwhile experience.