The accounts are so shocking, the more one reads the more one becomes numb. “The kidnappers would make me lie on my back and then they would get me to ring my family to ask them to pay the ransom they wanted,” 17-year-old Lamlam from Eritrea told the BBC in March last year. “As soon as one of my parents answered the phone, the men would melt flaming plastic over my back and inner thighs and I would scream and scream in pain.” Another man recalled, “They had about four of five of us tied up together and they would pour water on the floor and then electrocute the water so that all of us would get electrocuted at the same time.” He saw 20 people die. These stories are the tip of the iceberg of a torture and mass murder industry in the Sinai peninsula that is part of a network that spans across the Sahara and into Sudan, in which Beduin and Somali smugglers lure Africans into camps and torture them for ransoms of up to $30,000.

A new documentary, called Sound of Torture and directed by Israeli Keren Shayo, was featured at the recent Docaviv International Documentary Film Festival in Tel Aviv. In it she worked with activist Meron Estafanos, an Eritrean woman in Sweden who has a radio program and has been telling the stories of torture victims. We often focus on the torture aspect, and several websites have been founded to assist victims of torture (Sossinai.org and stopsinaitorture.org for instance) and many videos online document the abuse; but the real story must also include the mass murder.
In one case in the film, an Egyptian man who supposedly assists Eritrean victims claims he needs more refrigerators to house the bodies of the dead. “Eight hundred bodies are buried here,” he says. Almost every one of the 7,000 estimated victims of torture now living in Israel who passed through Sinai report knowing of people who had died or witnessing a murder. The total numbers of murdered could reach tens of thousands, which is a form of mass murder akin to a war crime. For instance, Azezer Habtezghi Kidane, who goes by Sister Aziza, is an Eritrean nun of the Comboni Missionary Sisters in Tel Aviv. She told a story of 150 people she knew about who escaped torture camps in October of 2013, but whose whereabouts subsequently became unknown. She writes that “many thousands die.”

Man thousands of bodies have been found (http://cofs.org/home/sinai)

Back in 2011, a Physicians for Human Rights report found through interviews that 59 percent of the Africans traversing the Sinai Peninsula had been chained or locked up, 52% had suffered abuse and 44% had witnessed violence and murder. A survivor told Corriera Dela Serra that “many of the women have been ferociously and repeatedly raped by Beduin who kept them in captivity in Sinai.” A 33-year-old man named Temesghen told doctors, “they threatened us: ‘if you don’t pay we’re going to take your organs.’” People were chained up for over six months; they were kept inside water tankers, in the hot and boiling sun; the women among them raped everyday. And many of them were murdered.

THIS IS a well-known phenomenon, and the perpetrators are also well known. Almost all the victims relate that they were kidnapped by Rashaida Beduin from refugee camps in Sudan after having fled Eritrea, or were lured by tribesmen from Eritrea with promises of work in Sudan or Egypt. A March 2013 paper for the UNHCR by Rachel Humphris was even titled, “Refugees and the Rashaida: human smuggling and trafficking.”
The Rashaida sell the victims to Beduin tribes in northern Sinai. Not all the tribes are involved; one sheikh, named Mohammed Abu Billal, of the Sawarka tribe, became a Salafist and decided he should fight human trafficking. Another sheikh, named Mohammed al-Maniri, was said to be helping Eritreans who had escaped the torture camps in places like Rafah, El Arish and Gorah. In a strange gathering in 2010 members of the Tarabin tribe said they would work to prevent Africans passing through the Sinai and combat human trafficking, although it isn’t clear they ever carried out their vow.
In December, 2013, Al Jazeera reported on another local sheikh who led an armed raid on a store where torture was taking place. “When we heard about the intensive torture of these people, including one old woman who had been raped, we were horrified,” Sheikh Mohammed told Al Jazeera. “This is a crime against our religion. We found the owner outside the store and he was forced to let us in [because] we were 10 men. We found some terrible cases inside, including one 14-yearold boy in an individual cell. We took the hostages with us, as well as two of the guards outside the building.”
The Beduin traffickers at first (in the early 2000s) only demanded $2,000 ransoms, but by 2010 the amounts had reached $30,000 and reports noted that often when ransom was paid, they simply transferred the victims to other Beduin. Eric Schwarzt, US assistant secretary of state in 2011, said he had “rarely if ever heard about abuses as dreadful.” A UN spokesman said it was one of the most unreported humanitarian crises.
It has flown under the radar with no solutions on the horizon due to Egypt’s chaotic politics. Under Mohammed Morsi the military believed that jihadists had infiltrated the Sinai and were being allowed by the government to kill Egyptian soldiers. This was one of the motivating factors behind the military taking power under Field Marshal (now President) Abdul Fattah Sisi in early July, 2013. But the unrest has not stopped. In November of 2013, for instance, 10 Egyptian soldiers were killed in a car bombing. Sisi’s agenda in Sinai therefore dovetails with a humanitarian agenda of cracking down on the lawlessness of Beduin mass murder and torture of Africans.
We should be cognizant of the fact that supporting Sisi in Sinai runs the risk of supporting his other heavy-handed crackdowns, on the Muslim Brothers and dissent. But the evils happening in the Sinai outweigh other issues. When human rights organizations estimate tens of thousands have died, when most survivors report torture, when they report hearing of dozens killed or raped, the time has come to use the harshest possible means to annihilate the smuggling networks, close the camps and bring order to what survivors call “a hell that we wished death would release us from.”

Sisi can show the world that he is benevolent and that his rule will end people’s suffering. There is already an awakening in the Sinai among some of the Beduin, who resent the actions of others, and there is a religious realization among the Muslim pious that gang rape and organ trafficking are evil.
They know that the Sinai gangs spread immorality and that what begins with the torture and murder of the Eritreans ends with the murder of others. They know that the Beduin who proudly told BBC and CNN reporters, “A lot of people I have killed here. This is my work, I live by this work,” don’t confine their murder to Africans; they are psychopaths and their “work” affects all of society.
In 2012, Lina Attalah at the Egyptian Independent wrote that, “Some tribesmen tell us that security forces are under-equipped and can easily be beaten by the military prowess of the traffickers.” It is time to show these torturers that they do not run the Sinai Peninsula.
Human rights organizations have not been able to raise awareness, the world shrugs its shoulders amid the rest of the chaos and bloodletting and sickening crimes in the Middle East, and we become inured to suffering.
But Egypt has an answer in its armed forces; at the very least it can restore the army’s honor, which has suffered from years of humiliation at the hands of the traffickers, and if that saves just one life, it will be worth it. 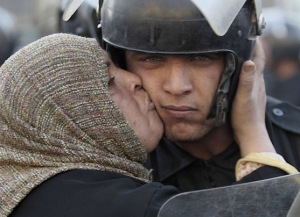 Egypt will thank Sisi for restoring its honor in Sinai