There is something surreal about Palestinian protests. As a huge protest gathered at Ramallah last Thursday, other parts of East Jerusalem were eerily quiet, and at the DCO checkpoint north of Ramallah there was no Israeli army presence, where usually there is a large manned checkpoint.  The Palestinian Authority police, who lumber around in central Ramallah, well armed, were nowhere in attendance as more than 10,000 people crowded the main road to Qalandia, the central checkpoint into Jerusalem from Ramallah on Thursday night, July 24. Laylat Al-Qadr is traditionally a holy night during Ramadan and has also been the scene of mass protests and clashes in the past, both here in the West Bank and also in other hot spots of conflict, such as Kashmir.

Police in Jerusalem began cordoning off the Old City of Jerusalem early in the afternoon and put up tape to prevent traffic entering Sheikh Jarrah and other points in East Jerusalem. Men were restricted entry to Jerusalem as fear of clashes mounted throughout the afternoon. Later photos showed some men near Al-Aqsa mosque had fought with police.

Jerusalem has been tense and a scene of clashes since the July 4th funeral of Mohammed abu Khdeir, a Palestinian who was killed by Jewish extremists. But the rioting has been in selective areas, such as Shuafat. Now on July 24 it centered on Qalandia with smaller clashes in Isawiya, a neighbourhhood that abuts the Jewish neighbourhood of French Hill and Hebrew University.

The news of the protest was spread on social media in the week prior. More than 21,000 were invited to the event which was labeled “Protest 48” in reference to the 1948 war. In addition people passed out leaflets about the Gaza war, “Palestinian genocide,” they shouted. With over 700 dead by July 24, many West Bank and Jerusalem resident Palestinians felt it was important for them to show solidarity. There has been quiet criticism of the Palestinian Authority’s Mahmud Abbas for not speaking out on Gaza. “Look at the police standing around, doing nothing,” said one woman driving passed a Palestinian police checkpoint. “We have to show Gaza we care.” Although some commentators, such as Khaled Diab, an Egyptian born writer who lives in Jerusalem, termed it “one of the largest rallies in recent memory,” other attendees were more nuanced. “We’ve seen clashes like this before when I was growing up.

INITIALLY PROTESTORS marching toward Qalandia were met by a large contingent of Israeli police. A standoff ensued between rock throwers and others using slingshots with marbles. Mohammad al-Araj, a 19-year old was killed in the early evening. By 10pm a massive crowd had formed. Tires stockpiled earlier sent black smoke into the sky.

It looked like a post-apocylptic battle; with young men, faces wrapped in shirts, khaffiyahs and balaclaves, arms drenched in dirt, sweat and smudged with black tar took up positions behind metal pylons, rocks and anything they could find. From time to time they would rush back to gather stones, demolishing parts of a hillside, ripping off parts of a rock wall the abuts the main road. Women chanted slogans and encouraged the “shabab [youth].” A few blocks away I saw men emerge with the sweet smell of gasoline. 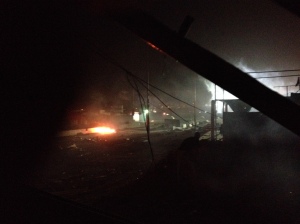 They were making malotov cocktails. At around midnight the ‘rat-tat-tat’ of gunfire rang out. A momentary fear swept the crowd, some began to run; and then others shouted “allahu akhbar [god is great].” Bystanders explained that the rumor was that a Palestinian had fired at police. Subsequent statements by Israeli police confirmed that they believed Palestinians used live fire.

At the same time a massive ambulance rank formed just behind the front of the clashes. As wounded Palestinians were pulled out by their colleagues, they were rushed to Red Crescent workers who took them away speedily to Ramallah.

Throughout the evening I counted more than hundred ambulances come and go by 2am. Later reports said 287 Palestinians were treated for injuries, mostly by rubber bullets, although some claimed they were shot by live rounds. A second protestor, Majd Sufyan was also reported killed in the clashes at some point.

The massive attending crowd was mixed. Some old men in suits with trimmed mustaches looked on. Europeans and Americans watched with ill-fitting khaffiyas. Two Hamas flags were seen. 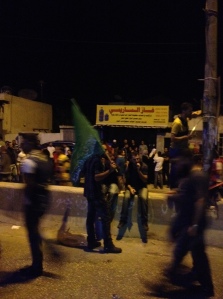 Many women, a few with niqab covering their full face, but many without any headscarves; participated. Some women even went up to the front of the clashes and in the billowing black smoke they peered around with smart phones on the ground to find marbles for men with slingshots. It was a surreal scene. In the air above the flashbang grenades reverberated. Men being carted off with bloody arms and legs. And here women crouched, looking through the black wet pavement as if for a dropped contact lens.

Others posted photos Friday morning of ‘back to normal’

By Friday another five Palestinians had been killed in the West Bank, two in Hebron, one in Beit Ommar and another at Hawwara; bringing a “day of rage” to seven dead. Some commentators posted photo albums of the chaos with captions “third intifada.” But by Staturday, with the end of Ramadan approaching, things seemed to have quieted down.