There is a narrative forming that journalists in Gaza covered up for Hamas, purposely avoided seeing Hamas fighters and rocket launches and that they did this because they were harassed. 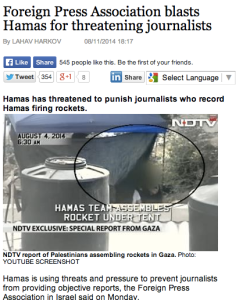 The Foreign Press Association in Israel made this claim on August 11th. As The Jerusalem Post‘s Lahav Harkov reported, the FPA said is “protests in the strongest terms the blatant, incessant, forceful and unorthodox methods employed by the Hamas authorities and their representatives against visiting international journalists in Gaza over the past month.”

This view has also been advanced by Israeli Prime Minister Binyamin Netanyahu and many others.  Specifically reports by NDTV and also France24 seemed to reveal Hamas rockets fired from civilian areas.

So how is it possible, many wondered, that so few other instances were caught on camera?  The Israeli press and pro-Israel voices held aloft journalists or examples that seemed to back up this view.  For instance Italian journalist Gabrielle Barbati had tweeted that he was “out of Gaza, far from Hamas retaliation” and then argued that the IDF was not responsible for an incident involving civilian casualties.

In a pushback against this many have called this claim “nonsense”, as The New York Times Jodi Rudoren did in a Tweet.

The issue is more nuanced than is being discussed

Let’s consider that most of the people involved are correct.  CNN’s Martin Savidge or Fox News John Huddy aren’t being held at gunpoint by Hamas and ordered to report certain things.  In the opposite, they are in hotel rooms or locations monitoring the conflict and providing updates.  But many of these reporters don’t move around Gaza that much.  When The New York Times Tyler Hicks caught the famous pictures of boys killed on a Gaza beach on July 16, it was also because he and many other journalists were staying a nearby Deira Hotel.

A Washington Post report noted how the hotel is a favorite for journalists.

A hotel much loved by the press

That isn’t a conspiracy.  Of course journalists will flock to popular hotels and every conflict has these types of locations.  And then it is not a surprise that part of the “stories” covered all center around the hotel and its network of “sources” for the journalists.

And consider the other side of the problem of reporting from Gaza.  Journalists work with local fixers or local reporters.  Harriet Sherwood of the ‘Guardian’ devoted her “goodbye Gaza” article to her friend Hazem Balousha.  She wrote “He arranges interviews and provides translation; but most importantly he helps me understand the people, the politics and the daily struggle of life in Gaza.”  And so her reporting reflects his network of friends and probably his own political views. Invariably the fixers are male often.  So one might say the media has as much a conspiracy about not showing deep inside the Hamas organization as it does ignoring women.  And how many Islamic Jihad activists are interviewed in Gaza.  Not too many.

Some journalists had access to Hamas and their tunnels.  Al-Jazeera got an exclusive report.

To understand what happens in Gaza then one has to understand the problem functions on several layers.  Accusations that Hamas maintains a “blacklist” of reporters may be partly accurate, but the real issue is self-censorship.  People think they will have a “revealed” moment when journalists leave Gaza.  They will kiss the ground and say “back in the land of the free” and report “the truth.”  But this ignores several basic facts.

1) Some journalists actually have a biased view and believe entirely the Gaza view of events.  Harriet Sherwood was enamored of Gazans who she said are “overwhelmingly decent” and who want “dignity” among other things.  She didn’t seem particularly enamored of Hamas but didn’t have much bad to say about it.  She said “I’ve never felt in danger from any Palestinians in Gaza, Hamas or otherwise, except from customary gunfire at funerals” and she had felt the “whoosh” of rockets fired.  She described singer Mohammed Assaf and how “He told me he had been arrested more than 20 times by Hamas security forces.”  She noted “I listened to Hamas officials saying the bloodshed of their own civilian population was necessary in the fight to the death with the ‘Zionist entity’.”  But was Sherwood’s judgement clear in her reporting?  If she had been in the UK and a singer was arrested 20 times by men in balaklavas for the “sin” of singing in public, would that have been so normal?  Or the gunfire at weddings?  If she had seen it in Israel, how would she have judged?  In the end of the day many see Gaza through an Orientalist lens.

So blend in some Orientalism, some true romance with the Gazan’s “struggle” and some blinders and outright desire to be sympathetic and you end up with a toxic mix that lends itself to certain story-lines that won’t ruffle Hamas feathers.  Consider that there are probably some “fixers” and others who support Hamas and they help feed the narrative.  And there are some reporters who truly admire Hamas as a “humanitarian” organization, as the Qatari’s famously told Nancy Pelosi.

2) Other journalists want to keep their seat at the table.  Ot is obvious that those who come out of Gaza and have a “revelation” about Hamas might not be welcomed back.  How much conscious blinders go in to maintaining the access of the individual media parent company in Gaza?  The narrative that says journalists would immediately “tell the truth” is mistaken because it ignores the long term interest many have in returning.

3)  Consider the physical problems of reporting from Gaza.  As mentioned above, journalists don’t often leave their hotels or certain areas to venture out during war time.  The constant refrain “why don’t they show Hamas”, implies that Hamas is a massive organization with large army units.  But it isn’t.  It has thousands of fighters.  Much of its ordinance is underground.  It’s rocket launches are carried out sporadically, hastily, and do not involve large operations of hundreds of men; but small teams who emerge to do their “work” and go back.  How is the media supposed to find these rocket teams without good luck or being invited to join? Some journalists who ventured out too close to the fighting or into harms way were killed, like Rami Rayan; so why would journalists put themselves at undue risk rather than staying in a location Israel and Hamas know they are located. 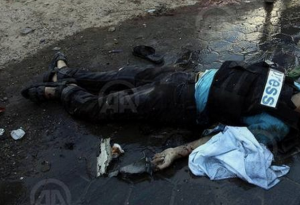 The main problem with reporting from Gaza is that it seems the media doesn’t have much of a grasp on Hamas.  Most reporters don’t seem to have good contacts, they don’t seem to know what the organization is planning or thinking.  Is this because Hamas is just so opaque it is impossible to understand?  Probably it has more to do with that orientalist issue.

‘Journalists don’t have to be pressured by Hamas because they don’t venture to far from an accepted narrative, that is neither a conspiracy or one involving constant Hamas threats’

Although people talk about Hamas “humanitarian” work; the reality is that they don’t want to cover Gazan institutions, they want to cover Gazan people, the “voices” from Gaza.  They want to cover, Ahmed, Faten, Saleh, and “the people.”  This is a classic way that most media treats third world countries.  Check out BBC’s “focus on Africa” and you find “African voices.”  Check out BBC’s programs on America and you mostly find elites.  The media has a script for covering Gaza, and looking too deeply at Hamas is not part of that script.