The AJC has published a “meme” that claims to show a 91% increase in anti-semitic incidents in France. 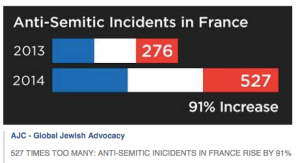 But not quite as shocking when one looks further into the data.  In 2013 the exact same news story of Jews fleeing French anti-semitism was also on the lips of journalists reporting about anti-semitism there.  “The figures correlate with an explosion in anti-Semitic attacks registered last year: A total of 614 recorded incidents that constituted a 58 percent increase from 2011,” read one report.

And back in 2001 it was the same narrative at the ADL. “An incident in late December 2001 in London caught the attention of media and highlighted a problem that should be of concern to Jews: rising anti-Semitism in France.”  In this report the claim was “Between September 9, 2000 and November 20, 2001 – in just over a year – 330 anti-Semitic incidents took place in Paris and the Paris region, where half of France’s Jews live.”

And in 2012 the French were reporting to face an “unprecedented wave of anti-semitism.” According to this report “There was an increase of 45% in the number of anti-Semitic acts in the first during the first eight months of 2012 compared to the same period last year, according to the national Jewish Community Protection Service. According to the Interior Ministry, 386 anti-Semitic acts were perpetrated during that time, including 101 acts of violence and vandalism and 285 threats.”

It seems the level of anti-semitic incidents rises up and down with a general trend being towards higher levels. For instance “between 1 September 2000 and 31 January 2002 405 anti-Semitic incidents were documented.”  It depends on how they are reported.  A CNN study showing a “dramatic rise” in 2009 claimed “The number of incidents in France rose from 50 to 195″ because they only looked at certain types of assaults and not verbal threats. 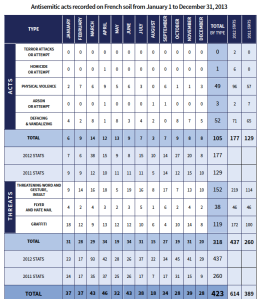 So what is to be concluded.  Yes, anti-semitism is up in France, but the “91% rise” figure is only conveniently employed to compare to 2013. Historically periods of conflict in Israel have seen dramatic rise in anti-semitism.  It doesn’t mean there is any excuse for fascistic assaults on Jews; it just means that a deeper look at statistics and the continuing narrative of the “dramatic rise” needs to be more clearly spelled out.

The media rarely reports when there is a decrease in anti-semitism…and that may not help give the public an accurate assessment.