Things to do on Scottish Holiday: Make sure to destroy rental car at end of trip, so that it can be cheerfully towed back to the airport by a barely understandable driver with a thick Scottish accent. Second, make sure to arrive at expensive tourist attractions, such as the famous castle of Stirling, early in the morning before they open so as to avoid paying and just see the outside grounds, which are better than the inside anyway. Third, make sure to bring a designated driver to visit copious distilleries, or you will be ruining the aforementioned rental car earlier in the holiday.

Scotland has long been an adored subject of travelers and writers such as Sir Walter Scott, Robert Louis Stevenson, Jules Verne and James Boswell. To understand Scotland, then, is to dip into the imagination of what Scotland is supposed to be. The lovable tartan designs of criss-crossed colors that appear on kilts; the interest in Scottish highland clans and in heroes like William Wallace and Rob Roy – all conjure up heroic Scotland. Similarly, it is a countryside dotted with castles and estate houses, owing to its long connection to English dynastic struggles.

The country thus offers an almost endless list of things to see and do. Trying to fit them all into an itinerary is difficult. Most of Scotland’s population resides in the narrow waist of the country between Glasgow (population 600,000) and Edinburgh (population 500,000). Although there are certainly interesting sites in the region south of here, such as in the picturesque Lothians, we decided that the real heartland of Scotland, the areas in the north, were of more interest due to their rugged natural beauty.

Scotland, like Norway, and Acadia in the US, owes its striking highland scenery to the glaciers. Around 2.6 million years ago they molded, carved and created the beautiful terrain of cirques, moraines and long expansive valley vistas that characterize parts of the country. Many of the famous Scottish “lochs” – such as Loch Ness, home of the eponymous monster – are a result of this period. 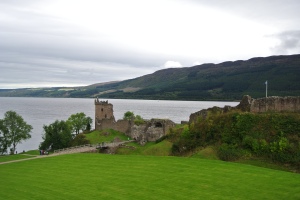 Loch is a Gaelic word meaning simply “lake,” and there are an estimated 31,000 of them in Scotland. But the largest of the lochs are the ones around which any travel to Scotland must take place. This is not just because of their beauty, but also because of their size and the fact that the major roads are situated on them. The best-known, such as Loch Lomond, Ness, Morar, Awe and Lochy, are major tourist destinations and worth a visit. Another feature of the Scottish landscape are the “glens.” These refer to valleys; long and U-shaped by glaciers, they offer beautiful vistas as well as walking opportunities. They also give their name to numerous whiskeys such as Glennfidduch, Glenlivet and Glenmorangie.

Traveling north from Edinburgh one comes upon a whole countryside dotted with references to William Wallace, made famous in the US by Mel Gibson’s Braveheart. Although Wallace was from north-central Scotland, all of his campaigns against the English took place in the areas around Edinburgh. A massive National Wallace Monument dominates the area near the university town of Stirling, in sight of the Battle of Stirling Bridge of 1297 – in which around 10,000 infantry and cavalry became congested while crossing the bridge, and were set upon by 2,000 Scotsmen. Some 5,000 of the English forces were killed in the lopsided battle. As we now know, Wallace’s victory did not save his life and he was executed in 1305. However, visitors to Stirling are not left disappointed. Driving into the town, one can see the site of the Battle of Bannockburn. Here in 1314, King Robert the Bruce of Scotland defeated another large English army sent to suppress the Scots. Tourists can pay the £14 fee to Stirling Castle and at the Wallace Monument, see a massive 1.5-meter-long sword supposedly wielded by Wallace. It would be nice to have a copy of the sword handy to see how heavy it would have been. Another statue at Stirling commemorates Rob Roy, a Scottish folk hero memorialized in a Liam Neeson film.

Skipping north from these fields of blood and Scottish glory, one comes upon the picturesque Doune Castle 12.8 km. to the northeast. Scotland has a lot of castles; some of them are famously picturesque such as Eilean Donan near the Isle of Skye, and others are just run-of-the-mill: nice, large estate houses called castles that are really just large homes built in the 18th and 19th centuries. Doune is interesting because it is pretty and easy to visit while on the road, nestled in a hidden gully. Built in the 13th century, it was restored in the 1880s but showcases the older style of castle building.

From Doune one can make a choice to drive down to the “kingdom of fife” to see St. Andrews, the “home of golf” and site of a beautiful university and historic cathedral. We skipped St. Andrews in favor of driving north towards the Cairngorms. The palace of Scone (£10.50) is worth a visit. The traditional crowning place of the Scottish kings, it has a quintessential manor house constructed in 1808 for the Earl of Mansfield. The grounds include a beautiful maze that one can get lost in, as well as some peacocks and long-haired Scottish cattle that add a comical touch. 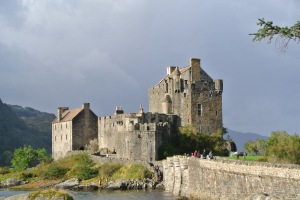 With a nod to the 2014 film Belle, there is a focus on Admiral Sir John Lindsay’s daughter Dido Elizabeth Belle. Dido was the progeny of the admiral and a freed slave who was raised by the Earl of Mansfield, Lindsay’s uncle; Lord Chief Justice Mansfield is credited with encouraging the abolition of slavery in the empire. The palace includes the beautiful painting by Johann Zoffany, depicting the dark-skinned Dido beside another of Lindsay’s illegitimate children, an atypical subject for that period.

Renting a car is a must in Scotland; this is abundantly clear as one moves north into the highlands. The massive 4,527-sq.km. Cairngorms National Park, one of only 15 in the UK, is the largest in the country. The park is built around a high plateau of peaks known as Munros. Named for Sir High Munro, who made a list of every peak over 914 meters (3,000 feet), the Cairngorms include 18 of these peaks.

In the center of the park, the quiet town of Braemer, with a population of 1,000, is an excellent base of operations for the hiker or rambler. Braemer is the home of a creative arts festival and a “highland games” gathering in early September, even attended by the royal family; their presence is not by chance, as the royal Balmoral estate covers some 20,234 hectares (50,000 acres) in the area.

A drive around Cairngorms, over the craggy outcroppings and narrow sheep-clogged roads, reminds one of the Scotland of old, a playground of royals and nobles. In October, one sees Land Rovers on the side of the road and people evidently engaged in “deer stalking.” The national park describes hunting in this way: “Today, it is up to our species to manage deer populations, to mimic the role of predators in order to achieve a diverse array of land-use objectives.”

Passing from the Cairngorms north, one comes to Inverness, a sort of gateway to the highlands and northern Scotland. At the northeastern end of the “Great Glen,” the town itself is worth a short visit. Traveling southwest from there is one of the great experiences in Scotland. The 113-km. drive parallels the great Loch Ness. Although famous for the monster, the loch has a beautiful castle at Urquhart with picturesque grounds and ruins overlooking the gloomy lake.

A highlight of any trip to Scotland is a visit to the hundred-odd whiskey distilleries. The value of the malt whiskey industry has doubled in the last decade to £4.26 billion, which means it is big business. The downside of this is that a visit to Glenfiddich, for instance, feels hokey and touristy. A man in a kilt greets visitors at an oh-so-glitzy Vegas-style desk.

Even the on-site store seems like a duty-free exhibition, rather than a manly smoke-filled whiskey shop.
So is it worth it to do a tour of distilleries? Yes, but not to do the tours and inspect the stores; rather, primarily just because it is a beautiful drive to get to each one. For instance, a trip to Talisker on the Isle of Skye can become a mini-vacation in itself. The fog-ensconced island features Scottish highland history related to the clan Macdonald, and beautiful villages and geological features such as the Old Man of Steor, a sheer finger of rocky outcropping.

Scotland is well worth a holiday. Food is reasonably priced, but fine dining is hard to come by and even when one does find it, the food is passable at best. It is worth splurging and staying at one of the many estate houses converted into small hotels. We chose the Ardanaiseig on Loch Awe in western Scotland, similar to other estates such as Glengarry Castle Hotel or Glencoe House. Although not cheap (£200-500 a night), one feels like they are living the life of nobility, with butlers and staff and invitations to “retire to the sitting room for coffee and tea.”

A perfect end to a perfect vacationland.