The situation is much better now than in the past. We can see a major decrease [in terrorist activity]; today any Hamas member who does even a small action, we stop him. We have the ability now, when the terrorist is just beginning to collect weapons for an operation, to arrest him,” explains Capt. Eitan Dana-Picard, as he stands in the beating sun near the junction where Road 35 meets Road 60, north of Hebron.

He puts up the wire mesh protector for the windshield on his army jeep, scratched and dinged from years of wear and tear. It strikes me, as we prepare to drive around the back of the Arab town of Halhoul, that the captain is well-armed for the adventure, an M-16 hanging over his chest and a sidearm tucked just beneath his army vest, three clips of ammo adorning the other side. Dana-Picard is taking us on a tour of Gush Etzion to provide a glimpse of the security enhancements in place since the June abduction and murder of the three Israeli teenagers. 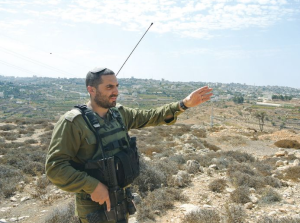 Born in France, Dana-Picard grew up in Jerusalem. He has lived in Otniel, a religious community south of Hebron, for many years. “All my time in the army was spent in this area,” he explains. His 13 years in the IDF include seven years leading anti-terrorism missions and some overlap with the six years he spent protecting Jewish settlements in the West Bank, most recently as a commander in the Etzion Brigade.

For him, it is a personal mission. Earlier in the day, we had driven past the bus stop at the entrance to Alon Shvut. Across from the stop are some grapevines that stretch into the distance; with this bucolic beauty, we could be in Tuscany or Southern California. But we are in the heart of the Etzion bloc of Jewish communities, and it is from here that Gil-Ad Shaer, Eyal Yifrah and Naftali Fraenkel were plucked from the road by Arab terrorists. The bus stop now has a large banner on it and a stone memorial.

Dana-Picard drives us down toward the coastal plain on Road 367 that snakes around the forest to the west of Gush Etzion. The terrorists Marwan Kawasmeh and Amer Abu Aysha were surprised to find three waiting hitchhikers and it is thought they panicked, driving down the road and then doubling back in their Hyundai i35.

Prior to the kidnapping, there had been a rise in terror activity in the area. “Before Brother’s Keeper [the operation to find the abducted teens], our abilities were very high. Prior to that, it had been many years since there had been a kidnapping,” the captain notes. The IDF’s narrative today is that, given the circumstances, they located the bodies in 18 days. In contrast, in February 1989, Avi Sasportas and Ilan Sa’adon were kidnapped and their bodies were only found long after (Sasportas in May 1989 and Sa’adon in 1996).

For Dana-Picard, the period after the kidnapping was difficult yet pregnant with hope. “We worked 24-hour days; I said I would not go home until I found the boys, as if they were my own children. When I search, I search as if for my own brother.” Despite media reports that suggest the army and intelligence knew that one or more of the boys was likely dead soon after the kidnapping, when the burned Hyundai was found, Dana-Picard says they held out hope to the end.

We drive on Road 60 past Beit Umar and towards Halhoul. For those in the Gush Etzion and Hebron Hills area, these villages are considered unsafe and the site of stonings of cars on the road, or havens for terrorists. Suddenly, the jeep swings to the left and up a small hill called Givat Asher; the hill overlooks Halhoul and has a rusted old IDF lookout at its summit.

Dana-Picard points us in the direction of a small hillock in the village a mile away. “That is where the bodies were found.” He explains that since the kidnapping, the army has made many advances in mapping the area. “Every rock and cave and site has been marked,” he says. Dana-Picard feels an intimate connection with the residents of the area. Like many of them, he sports a crocheted kippa. He lives here, and this has been his army home for many years; these are his people. “There are 70,000 residents under the brigade’s auspices,” he says.

The IDF works closely with the local civilian security coordinators. Dana- Picard says the army learned a lot through the searches conducted in June for the missing boys; dog units were employed, as were Beduin trackers. “With all the defense bodies working together, we increased cooperation. We mapped the area and learned about the open spaces and about the houses we searched.”

Towards the end of the 18 days, they also had men from Gush Etzion who had been in army intelligence and now worked in civilian life that volunteered to help. “They came to us with maps and geography backgrounds, they could shed light on the area.” The increasing liaison work with civilian experts was an added bonus of the operation.

Dana-Picard drives us down to the junction, where he battens down the hatches of the jeep. We enter the hamlet of Khirbat Abu Rafat north of Hebron, and make a circuitous turn into Wadi Zarka. The valley is famous for its copious springs. Looking out of the metal mesh that protects the windows from stones, we see a young boy come out of a house and wave a peace sign. The US Agency for International Development- funded road goes down a parallel valley, and we eventually arrive at a lookout on top of Khirbat A-Safa. Olive orchards drift down the valleys all around us, and the coastal plain is visible to the west. To the east is the sprawling town of Halhoul. Dana-Picard points again to the place in the distance where the bodies of the teens were found; we have come full circle from the other side of the town.

As we make our way back, the serious captain gives a soliloquy on his life in the army. “We are able to do this work because of the devoted military wives who stand by us… What is it to be a week away from one’s family [in this job]? This is our land and we are protecting our people, only 70 years since Auschwitz.” Dana-Picard sees this as a monumental transformation, a Jewish soldier, independent and able to confront his enemies. “This Rosh Hashana, the entire Jewish nation opened a new year. We have hope for the future, and we have everything in our power to make this year a blessing. “We work day and night to protect our people.”

One response to “The man guarding Gush Etzion”