If someone told you that a second secretary of the under-secretary of Putin’s foreign ministry had insulted Barack Obama, you’d shrug. “Did you hear they called Obama a ‘big whore’ in Russian?” So. Even if a well-known Russian magazine broke this news, it would be snooze-worthy. The same goes for basically any other country. Recall Berlusconi’s scandalous and frequent national insults against Germans and others (he once called Merkel an un-***able lard***“. Greeks calling German leaders “Hitler” or “Gestapo.” Shrug.  When US diplomat Victoria Nuland was caught on a leaked tape insulting the EU, she apologized, and the issue went away. It’s rude, it’s not nice, it’s not diplomatic, but in the end it’s meaningless.

Not so Israel. As reported by Jeffrey Goldberg in the Atlantic, an Obama administration official called Israel’s Prime Minister a “chickenshit.” He went on to accuse Netanyahu of cowardice in not pursuing peace with Mahmoud Abbas and the Palestinians.  “It is the Netanyahu government that appears to be disconnected from reality. Jerusalem is on the verge of exploding into a third Palestinian uprising.” 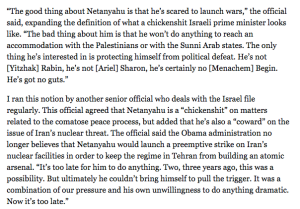 A screenshot from Goldberg’s article

When the news broke it was already during a tense time in Israel-US relations. Netanyahu’s defense Minister, the indefatigable Moshe ‘Bogie’ Ya’alon had got back from Washington hat in hand because he had been blackballed by administration honchos. A leak confirmed the intentional humiliation. Other leaks confirmed the administration was angry with Israel. Charles Krauthammer would later say it was the “worst crises in 50 years” between Israel and the US.

So the “chickenshit” comment was emblematic of a larger feud. But why was it seized on, not as a symbol, but as supra-important in itself. It set off alarms in newspapers, commentators tried to figure out how to translate it to Hebrew. Every major newspaper and channel in Israel and abroad reported it. Some went as far as to point out “other people have been called chickenshit.” You’d think that wasn’t the case. Kerry even apologized.

So it’s worthwhile to summarize what you’re not being told. What you’re missing in the debate.

Let’s take a peak behind the curtain:

Media stories move in waves. They are endlessly breaking waves of information, scandals and “stories.” Smart media players drive those stories, they stay at the crest and find new information so that the wave doesn’t break too fast. What better time to find an administration official to say “chickenshit” than in the midst of an escalating crises before the mid-term US elections and during yet another “settlement building” crises?

That doesn’t mean Jeffrey Goldberg created the crises or the story. He let the chips fall where they may, and it turned out he had a big hand. He caught an ace on the river, as they say in hold’em.

2) The media missed the forest for the trees: Instead of looking at this as a symbol, the media got lost in the details. They went down the rabbit hole into the minutiae of “what is chickenshit?” It is like they hadn’t listened to the tapes from the period of LBJ and Dick Nixon.

(one of many offensive Nixon tapes)

3) Even in the details they missed the point. How important was the chickenshit comment? Maybe this administration official talks like this all the time. Maybe he was unwinding after a long day? How important is this official and does he have the president’s ear? Why is this comment important in the grand scheme of things?

4) Pro-Israel commentators thought that the proper retort was to emphasize Netanyahu’s military record, a totally superfluous issue. There is always a disconnect between substance and how to “spin” it. So those outraged by the comment decided that to combat it the logical reaction was to show that Netanyahu wasn’t a coward, as if the US administration had been talking about his military record, which it hadn’t. So people put up memes on Facebook with a photo of Bibi in combat gear from his years in the army, and pictures of Obama smoking a cigarette in college. “Who is the real coward?”

But this misses the point. Someone might have been a very good military commando. They may not be very good at being a plumber or a lawyer or doctor. The US has had its share of former military men in the White House. Their guts on battlefield didn’t always translate well into political savvy or leadership. Who thinks General U.S Grant was a decisive political leader? But that’s sacrilege to the pro-Israel crowd. The process of deflection, of saying “Obama called Bibi a coward, but who was a commando?” Netanyahu himself burnished his credentials defending Israel as a retort. But the Obama administration official was referring to the peace process. 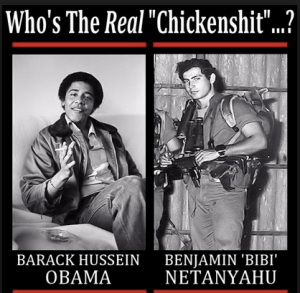 One of many memes created to showcase Netanyahu not being a “coward.” What does one have to do with the other when it comes to politics? Not much, maybe

5) This ridiculous squabble doesn’t matter. There is a powerful lobby in Israel against Netanyahu that seeks to embarrass him at every possible juncture and to paint his administration as radical right wing, as out of touch with history, a threat to peace, and as spurning the Obama administration. They seek to announce “settlements” and other items that “endanger peace” and to always highlight the antics of various Israeli politicians.

Unfortunately the American media (and Israeli media) get taken in by this reporting, sponging up reports that Ya’alon called Kerry a messianist. Again, so what? Insults are part of life. This isn’t high school. And Israel and the US are allies, they should be able to be honest with eachothter and even have wayward ministers who say stupid things.

The long history of the “America must force Israel to make peace” is part of the Israeli media narrative on the left. Others on the left have such a vitriolic hate of the Netanyahu administration, they will do everything to highlight how it is “ruining our relations with our greatest ally” or as Chemi Shalev said “Israel is biting the hand that feeds.” At the same time there is a powerful anti-Obama constituency in the US who seek to drag the President on the carpet everytime he makes a mistake in the Middle East. So they say “he is harming our ally, Israel.”

Suffice to say, this “chickenshit” comment is unimportant and that it was ever given credence shows the media tendency to focus on details over broad issues that actually matter.