On October 8, 1917, William H. Hart wrote home to his parents. “This will not reach you until you will have heard that we have left. We go tomorrow and board ship, where and when we don’t know. I know the way you feel about my going, but now we’re off, glad of it and I’m in a good crowd and a darn good one.” He told them that if they should need to reach him to just write “American Expeditionary Forces” and “26th Division.” He’d write again when he got the chance, he said.

William, who signed his letters “Bill,” went off to war in Europe like so many young men of that generation. The war would take the lives of 10 million and leave more than 20 million wounded. This month commemorates the beginning of the war.

The monstrous conflict was overshadowed by the mass killings of the Second World War and the Holocaust, but we still live in its legacy. It gave us many expressions, and in some ways the ethnic cleansing taking place in the Middle East is a long continuing process that began with the Armenian Genocide of 1915. 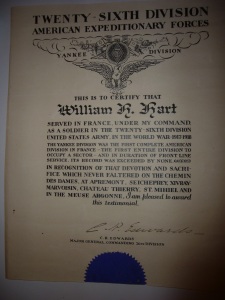 Bill Hart was just one of many men who went to fight the war, and he was also my great-grandfather. After the war his letters home were bundled together and later my generation made copies of them. They serve as a window into the past. Pictures of Hart before the war show him at his Harthaven House in Martha’s Vineyard. He came from a large and well-known family which had founded the little eponymous settlement on the island, which has over the years become well known as a vacation place for, among others, the Clintons and Obamas. Photos show him standing straight with his arms behind his back; handsome and sturdy.

The unit he joined, the 26th Division, was the first sent over to Europe in September and October 1917. As its commanding officer Major C.R. Edwards later wrote, it “was the first complete American division in France – the first entire division to occupy a sector – and in duration of front line service, its record was exceeded by none… it never faltered.”

Hart was enthusiastic when he joined, writing home that, “I’ve got a hunch this life is going to agree with me.” But the voyage over was fetid. “We were way down below amongst the rats,” he wrote. For a man who enjoyed sailing back home, it was not an enjoyable voyage. In France they found the towns deserted. “It is shot to pieces, in this town only old men and kids are left.” Through December they sat billeted in houses and sheds.

He wrote home that he was being paid $20 a month, half of which he was sending home. When he was finally sent to the front in February he recalled, “It was a quiet sector, and it was the best sport we have had yet. A game of hide and seek, shoot and run.” It was obvious as time went by that he was leaving out some of the worst details. Reading an excerpt from a paper from back home he wrote, “If you read that stuff just slip in about 1,000 grains of salt and don’t believe most of it.”

His descriptions of the front were pithy. “Funny combinations of sounds you hear around here. Every now and then a heavy mumbling like thunder in the distance, almost drowned out by a cuckoo bird right near at hand. Then a Boshe [German] machine gun opens up in a careless way, sounding like a one-lung cat-boat with a skipping engine going up Katama Bay. A little later you unconsciously jump – when a 75 [millimeter artillery shell] snaps over your head from your own batteries right behind. Meanwhile someone over to your left is chopping wood for the kitchen fire, like you were in the Maine woods on a hunting trip.”

William Hart’s family, he is at the bottom, far right

This was the infamous war in which infantry were thrown into battle at alarming rates. On the first day of the battle of the Somme in July of 1916, 20,000 British soldiers were killed. These were the “lions led by donkeys” as the saying goes. It was a different kind of army also that had gone forth from these countries. It contained the flower of youth, often from the best families and good schools.

At Harvard law school the class declined from 850 in 1916 to 250 in 1917, and business school fell from 232 enrolled to only 32. They were volunteers, many of them “among the choicest of their kind,” wrote Harvard president A. Lawrence Lowell. In the army their previous station in life gave them few benefits at the front. The 26th Division saw heavy fighting during the German spring offensive of 1918. In late July Hart wrote, “A short time ago we had an experience which we were all waiting and almost eager for – that is, going over with the infantry and seeing what it was like to really get mixed up in it.” He wrote about “the rotten smell of ‘dead things’ – mostly animals – horses, mules, cows which is almost everywhere you go.” He described how he had “learned the quickest way to land on our bellies, flat as a pancake, from an upright position, even though carrying m.g. [machine gun] equipment.”

The shock of the front was clear. But like so many soldiers he wished he had more cigarettes. “My high-brow taste for expensive cigs like Dieties is smashed to h—; send Murads or Fatimas or Lucky Strikes.” “Quantity is better than quality,” he concluded. He also asked for “good, American made high hunting shoes,” a “real life-saver” he noted. Many soldiers in the war suffered from “trench foot” acquired due to the wetness and mud. Shoes were indeed a life saver.

He concluded his letters often with “it’s fine” or “we’re all o.k.” He mixed in the hardships with an enduring romance that many have found in war. “I saw a wave of infantry advance down a wheat field one morning. It was a wonderful sight, seemed more like a play than the real stuff.” At some point he acquired a Germen helmet and sent it home. He remarked having come across bones of German soldiers killed in 1914. He took a brass buckle from one of the dead and sent it home also. He was in the prime of his life, writing, “I’m feeling top-notch, had a hike the other day that would have killed me two years ago.”

But things began to get worse in the fall of 1918. “In circumstances such as we met on the Verdun front it was impossible not to absorb the [poison] gas. We were lying in open trenches for 10 days and they used to pour it over all night long some nights. The darn stuff would hang in the valley all the time… we all got it more or less and there were others who were as bad as I was who were not evacuated. I thought I was lucky to get back to a hospital for a rest, but I find on my return that I was not so lucky.” He had lost his rank (Corporal), and remarked, “I return home, as I left, a private.”

He had lost friends in the battles and wrote a poem about one, Lawrence C. Yerges of the 101st machine gun battalion, who died October 24, 1918. For the battles that the unit was in, such as at Saint-Mihiel, Hart thought “the wiping out of the [German] salient was a farce, it was so easy.”

Contemplating his return to the US on January 5, 1919, after the armistice, he thought he could fill a book with his experiences. By the time it was over he was “sick of France” and his comrades were tired of army life “and don’t give a dang who hears it.” According to those that knew him, he didn’t speak about the war much when he came back. Like many others of that generation he returned quickly to work and family life. The war was forgotten, as the US sought isolation and fought political battles over Communism and labor unrest, and the stock market took off. But a hundred years later we should all pause to remember this momentous war, the toll it took and the people who survived it.