Another former director of an Israeli intelligence service has joined the chorus worrying about Israel’s future, and waxing nostalgic for the good old days of “his” Zionism. The former director general of the Mossad Shabtai Shavit was born in Mandate Palestine in 1939 and spent three decades in the shadows from 1964 to the 1990s.

The canary has emerged from the Zionist mine to warn about how, “for the first time since I began forming my own opinions, I am truly concerned about the future of the Zionist project.” He lays out his argument:

The frequency with which these old apparatchiks are trotted out of the woodwork and the degree to which they are taken seriously is astounding in Israel. In mid-November “fabled 1973 war hero” Amnon Reshef told an audience at the Israel Policy Forum in New York that he wanted to start a new political agenda based on former generals who would change the Israel that had been “brainwashed for over 40 years with settlements in the West Bank and Golan Heights.” He said he wanted to “tour the country with 40-50 generals” who would sell a new plan to the public. Like Shavit he espoused working with friendly Arab states. Shavit argued Israel work closely with Saudi Arabia. Reshef said Egypt would be a key player because they “know how to talk” to the Palestinians. The article noted that Mubarak had called Arafat a “dog.”

Nostalgia for the old days

The building blocks of the this pre-1967 Center-left coalition is entirely centered around a military-industrial complex of former security “elites.” Ironically this is what many on the Left in Israel has worshipped since the inception of the country. Generals and former intelligence agency directors are seen as the “technocratic” answer to the Israel’s “failing democracy.” It is ironic perhaps that rushing to appoint generals to run the country is what some on the Left think would help Israel “democratically.”

But it speaks to this nostalgia that weighs the Left down in Israel. The point of reference for many of the elderly gentlemen, some of them born before the state came into existence, is always the 1950s. It is a reminder that Israel Zamir, an Israeli writer, died on Sunday November 23. In 2004 he had told Yediot Ahronot, without any shame, “I am a Marxist-socialist. I worshipped Stalin…I negated the Diaspora…I was a man of the soil.” This view wasn’t “controversial,” but normal among intellectuals and literati connected to the Left in Israel. You can almost hear Shavit in these words also, “soil” and “negate the Diaspora” are both themes he spoke of. It is the early Zionist ethos of land and nation; of pioneers and kibbutzim, of the ends justify the means.

Why is the shadow of the past so strong in Israel and a hungering for a return to the 1950s so clear? In most of the West the past has been disabused, and its abuses critiqued. In Israel an opposite process took place. When the Israeli right came to power in 1977, the left retreated into a cocoon. At first it thought it would get “our country back.” But as time went by, it simply froze in time and gave up hope.

The truth is that Israel’s former elites talk about the egalitarian state of their youth because they never grew up and they never wanted Israel to become a real state. For them Israel is like Pinocchio, a toy state. They were sold a fantasy by themselves and their parents. It is like children who are told “you are smartest and the best.” They were told “Israel is perfect, it is the most egalitarian state in the world, it is the best, the height of perfection.” They convinced themselves of this Stalinist-like propaganda, just as Soviet Premier Nakiti Khruschev thought the Soviet Union would defeat Richard Nixon’s America in supplying home appliances to the average person in the kitchen debate of 1959.

Many Western countries have had a road to Damascus moment in realizing their own past abuses. Whether it is the UK coming to grips with ‘Bloody Sunday’ in Northern Ireland and the abuses the British did in quelling the IRA, or the French admitting the torture of the Algerian war, or America coming to terms with the internment of Japanese-Americans. But Israel never went through this catharsis because of the shift in power in 1977 and the cocoon mentality that swept much of the Left. In order to portray the right as “fascist” and “anti-democratic”, which had been a common theme in Zionist discourse since the 1930s when David Ben-Gurion had called Ze’ev Jabotinksy ‘Vladmir Hitler’, the view that the right was “the problem” had to be maintained.

Founders of the Labor-Zionist Left are held in near god-like status in Israel. From Arthur Ruppin to Ben-Gurion, they are often beyond reproach. The mythmaking fed a false narrative of 1950s perfection. The fact is the abuses of the 1950s are well known: Almost 420 former Arab villages were bulldozed. Arabs in Israel were forced to live under curfew; the secret services infiltrated their villages, took them away, tortured them, sent undercover agents to pretend to be Arabs to ferret out “trouble-makers.” Newspapers like the Communist Ittihad were shut down. Bedouin were considered problematic were run off their lands by army patrols or concentrated in a “Bedouin reserve.” One million dunams were confiscated from Arab villages and given to kibbutzim.

The list of abuses is almost endless, and it was not only directed at Arabs. Jews from Arab countries were kept in fetid barbed-wire enclosed camps when they arrived, instead of being allowed to move where they wanted or to exclusionary kibbutzim, they were sent to “development” towns to serve as “a labor proletariat” for the elites. They were called “parasites”, “non-Jews”, “human dust” and “scum” in the press and were routinely referred to as “niggers”, “schwarzes”, “chachakim” and “kushim” by elites and academics. Racial and ethnic segregation and discrimination was widely practiced in Israel. The “egalitarian” society created separate school systems for Arabs and Jews, a practice mirroring similar horrors in the US South and South Africa in the period. 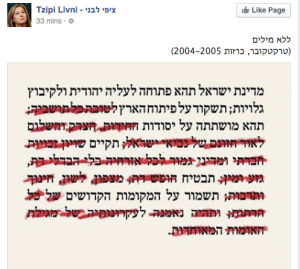 Instead of seeing any of this as a terrible stain on Israeli “democracy” in the period, this is the era that many on the Left want to return to. They really think this is ideal. They think the “anti-democratic” forces are only the right, without realizing that almost everything problematic in Israeli democracy is due to a legacy of the 1950s. Whether it is house demolitions, or discriminatory allotments of state land, the Bedouin issue, discrimination in funding for Arab education, the acceptance committees, militarism, nationalism, the prioritizing of Jews over Arabs or the role of religion in the state; it was all set in place in the 1950s. Has some of it gotten worse? Perhaps football hooligans in the 1950s didn’t shout “death to the Arabs” at games. Perhaps that is because there were no Arab teams to shout at because Arabs couldn’t attend the games under curfew. Its like pretending US sports fans weren’t racist before Jackie Robinson came along. Sure, there were no “tag mahir” or price-tag attacks in the 1950s; but that’s because the state was carrying out price-tags in their place; such as the raids into the West Bank to “punish” Arab villages.

Israel’s leadership on the left, if it wants to promote democracy and equality, needs to unshackle itself from the myth of the 1950s. It needs to re-orient itself and have as a point of reference the future, not the past. Start by admitting that there was nothing egalitarian about 1950s Israel and stop trusting “former generals” and “spymasters” to set policy.