On December 7th Naomi Zeveloff at The Forward broke the story that a well known “iconic” image of Jewish-Palestinian peace and friendship was staged. “The boys in the picture aren’t an Israeli and a Palestinian, but two Israeli Jews. The 1993 photo, taken three months after the signing of the Oslo Accords, is one of the most iconic pictures from the Israeli-Palestinian conflict.” The photo was taken by photojournalist Ricki Rosen.

The ‘Forward’ article and the iconic image (screenshot)

For those of us who are used to seeing clichéd stories of coexistence, this isn’t a surprise. Anyone familiar with Palestinians knows that most young Palestinians don’t wear a khaffiya on their head. Even though the khaffiya has become a political and national statement for some young male and female activists, they don’t wear it in this style except when older. This photo speaks volumes about the conflict and about the clichéd, orientalist narratives that make it up.

There are many examples of these kind of cliche photos, but this one is more real (screenshot)

Let’s look at the photo from three different viewpoints of what it conveys:

Stereotypes: It caters to orientalist stereotypes of Palestinians. It isn’t the first time or the only photo of this kind. In the mid-2000s Jerusalem City hall was accused of concocting a photo of a “Jew” and an “Arab”. The Arab was an Arab, but he was told to bring his khaffiya so that the photo would clearly show him to be the “Arab.” And this is often perpetuated. Palestinian women are almost always shown with headscarves or veils to make them appear “Arab” while men have to have khaffiyas.

It is about communicating to the Western audience what “Jews” and “Arabs” look like. Jews wear a yarmulke, Arabs a khafiyaa or headscarf. If you have a picture of two dark haired women standing next to eachother without the requisite “Jewish” and “Arab” markings the audience won’t get the message, so the narrative goes.

Many journalists covering the Middle East cater to this kind of low-level racism. Arabs who are interviewed frequently never have last names, they are often a one dimensional stereotype, even when the journalist ostensibly is telling “their story.” Media eschews stories about middle class or educated Palestinians, usually in order to bring us stories of people living “in tents” without electricity, sometimes even “living in caves.” Where they find this one percent of Palestinian society that ekes out an existence on the margins in society is unclear. But it is like the parade of journalists who go down to the Negev and cover “Bedouin” who are always depicted in tin sheds living “beneath electric lines.” No one notices the Dodge Ram or BMW next door to the furnished house next to the “tent.”

Jews, less often, are channeled into stereotypes. Radical religious “settlers” who are involved in some sort of violence or religious zealotry are paired with “extreme ultra-orthodox” who “don’t believe in the modern world” and who are depicted as alien-like. They “bob back and forth” and are seen also as one dimensional black moving objects, their world almost never worth penetrating.

Since the 19th century this Eurocentric orientalist motif has depicted the Middle East as drowning in religious backwardness and savagery, but also paired it with the exotic. Count how many times Palestinian women are described as “elegant” or “proud”; often subjected to adjectives that would never be used to describe European women. They are seen as “noble savages” often. 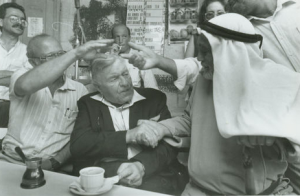 Honest: The photo reveals an honest truth about coexistence projects. Many coexistence projects in Israel are a sort of charade and often staged to a certain extent. In the case of the photo the young son of then Jerusalem Post reporter Haim Shapiro was asked to pose as the “Jew” and even though he was secular. His friend Zemer Aloni was chosen as the “Arab” because he had “eastern roots” since his father was from Iran. It was arranged by a Jewish photographer with Jewish friends, from an upper-class neighborhood.

Coexistence groups in Israel mostly operate like that on a larger scale. Almost all of them are run by Jews, often with a token Arab as a “co-director”, but the funding is often from Jewish donors abroad or locally. Peace and coexistence groups operate on this model. A well meaning Jewish activist will start the group and try to recruit some Arabs or sometimes will find them via the Arab partner. Often the same Palestinians will participate in a variety of these coexistence groups. It usually becomes difficult over time to even find Palestinian participants, especially female Palestinians t participate. One woman who went to coexistence meetings said she felt like “some of the Arab men just come to find a date, I would get hundreds of text messages after I went and harassment on Facebook.” Many coexistence groups operate as a sort of one-man band, and often don’t outlast the founders’ enthusiasm.

The truth is that there is almost no coexistence, in the form of friendships depicted in the photo, in Israel between Jews and Palestinians. That is why sometimes the few examples that do exist are passed off as more than they are. In one example Rabbi Yakov Nagen and Ibrahim Abu-el Hawa took part in a ‘Jerusalem hug’ in 2013. The picture was then re-crafted as “the uncle of Israeli teen Naftali Fraenkel and father of Mohammed abu Khdeir” in 2014. There was no shame by those who made it that they would take an image and pretend it was the father and uncle of people who had been murdered just to create a fake story of coexistence. Rather than outrage, this is considered normal.

Shocking abuse of human tragedy, one website re-packed a real picture to create a narrative (screenshots)

Truth: The use of two Jews to present the narratives of Jews and Palestinians symbolizes how the Palestinian narrative is often colonized by outsiders who pose as “speaking for Palestinians.” Although some news organizations do a commendable job of finding actual Palestinian or Arab voices, such as Mustafa Barghouti, Hanan Ashrawi or Hussein Ibish to describe Palestinian goals, many do not. That is why Peter Beinart, an American Jew, debates other Jews at college campuses and Jewish community centers, whether it is Alan Dershowitz or Daniel Gordis. Of course some of the debate is about what the American Jewish community should do. But Beinart also seeks to explain the Palestinian side.   Too often what we see is like the photo: Two Jewish academics or activists debating Palestine. Groups like Jewish Voice for Peace tend to colonize the Palestinian narrative in the West and pose as “defenders of Palestine.” Many people will openly say that when they want to study Palestinian history or know what Palestinians go through and think, their first step is to read Baruch Kimmerling and Joel Migdal’s book, or read Benny Morris or journalists like Gideon Levy and Amira Hass. Or they go to Philip Weiss website, Mondoweiss or Richard Silverstein’s Tikun.

It isn’t that all this Jewish activism for Palestinians is wrong or misplaced. It is that professional “Palestinophiles” like Alan Hart have made Palestinians their life, and they are then asked to comment on what Palestinians should do and “how Palestinians think.” Whole conferences are held on Bedouin in Israel without one Bedouin attending, but rather Jewish academics, such as Oren Yiftachel, debating the Bedouin.

In many ways the photo then reveals the degree to which this narrative is about Israelis and Jews negotiating their own future and their own identity. It isn’t about Palestinians. It is about creating symbols and narratives. One of those narratives is “peace” and “coexistence.” Peace work means different things in Ramallah or Hebron than in Tel Aviv. For instance, well-meaning teachers on the Gaza border will teach their students not to hate all Gazans just because of Hamas. There is no similar program in Gaza. In many cases one finds that groups like ‘One Voice’ which support the two-state solution will partner with their “Arab equivalent” which is called “Palestinian Voice” because the Arab equivalent must have a nationalist aspect. In other cases where Israelis who want to do good by spreading messages of coexistence, will help bring Gazan patients to Israeli hospitals, but will admit that the patients and their families refuse to go public about being treated in Israel. So the “coexistence” is entirely one sided.

Does the photo, by creating a fake “Arab” actually colonize the Palestinians? If the photo was made by a Palestinian dressing up one Arab as a “Jew” and another as an “Arab” how would that be interpreted in media? Would Jews want to be depicted by non-Jewish actors, and the Jewish or Israeli narrative almost always told by Palestinian academics?

These are important questions to ask. When we see a photo or read about Palestinians, what are we being fed, who is telling us the story, and who benefits and are we hearing any actual Palestinian voices, are we seeing real photos or staged photos. Staging of photos of course goes far beyond this coexistence photo; rock throwing is staged, and other types of incidents are created by the media or staged for the media. There are a whole series of charades that take place that without cameras present would not be there.