“Imagine a property based free market in Gaza…maybe if that option were on the table and they were in an open economy [an entrepreneur] might open a drive through Halal take-away; what the world is doing there has led to a bad case; imagine a propertied bourgeoisie, and imagine they had a stake in their property and wanted to stay on good terms with customers; and wanted to stay on track with trade with Israel, trade isn’t a magic wand that abolishes animosities, but it allows people to live with them, Milton Friedman said that markets bring people who don’t like eachother into contact.” 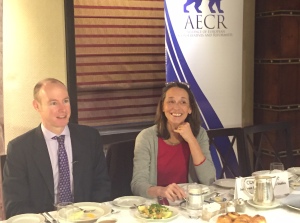 Daniel Hannan, a Member of the European Parliament and frequent writer on economic issues, is in Israel for the second time being hosted by the Jerusalem Institute for Market Studies (JIMS). A former speak writer for Michael Howard and William Hague, he is a passionate believer in the possibilities of free markets to bring political freedom to the individual and indeed, the region.   What is wrong with Gaza at present, he notes, is that it is not just a “terrorist haven” but that it is one of the most “externally subsidized piece of real estate” in the world. This creates conditions for an idle group of people who become violent.

Corinne Sauer, a co-founder and director of JIMS, introduced the British politician at a breakfast at the ornate King David Hotel in Jerusalem. “He is a champion of liberty; we opened [JIMS] in 2003 and wanted to bring economic and social freedom to Israel…Dan looks at freedom and Israel in a special way and believes economic freedom can bring a solution to a long conflict. Studies show that when countries engage in more trade the probability of conflict decreases.” The forty-three year old Hannan concurs. Lean and youthful looking, he speaks with pleasantries about taxi rides in Israel and visiting the region; but he also sees an area that can benefit from further economic liberalization. He draws parallels with the Jewish experience in the UK. After 1656 he notes Jews flourished in England; even though they surely suffered anti-semitism. It isn’t a surprise that “those who had contempt for Anglo-Saxon freedom and capitalism; they tended to be anti-semites and have contempt for free trade; they wrote of Britain that capitalists were soulless; a ‘nation of shopkeepers’ and ‘money-grubbing’; Napoleon thought to insult us as a ‘nation of shopkeepers’, but nothing makes me happier than to see a shopkeeper carrying on an honest service,” he notes. He draws a further comparison, arguing that critics of Israel and the British capitalist model are frequently fellow travellers with socialism, noting that the popularize of modern anti-semitism, Wilhelm Marr, said “anti-semitism is a socialist movement that is nobler than social democracy.”

He meanders back to discussing Israel, noting that he was given a tour of the security fence (or wall) that divides Israel from parts of the Palestinian territories. A Supreme Court decision forced part of the barrier to be moved. “In how many states would the military authorities accede power to the judges, what a glorious parliamentary system.”

Many of the attendees were interested in his views on the boycott movement against Israel in Europe and EU policy that appears increasingly frosty towards the Jewish state. Hannan saw the negative view of Israel emanating from three elements. “First of all the EU sees it as part of its role to counterbalance the US; there is a corpus of intellectual thought in Brussels about the dangers of a unipolar world. In this part of the world it overlooks the flaws of those it is sponsoring, the EU is by far the biggest supporter of the PA, and when Hamas was put on the terror list…[policymakers] had to funnel money through various NGOs to remain within the letter of their own law.” It wasn’t that the EU wants to support Hamas, he acknowledged even the Left views Hamas as vicious; but that the policy was designed to counterbalance US support for Israel. Second he argues that there is a sort of exoticism in the policy that supports Arab dictatorial regimes. “If an English politician looks at the region Israel is familiar, it has law, democracy, property rights.” He argued that some people in Europe “detest global capitalism” and therefore being more similar to Europe, as Israel is viewed, is actually bad. A Bedouin sheikh, with “flowing robes” or a hiarchichal traditional society is viewed as more positive, precisely because it is different.

“The third reason is that EU was founded in opposition to the nation-state; the vilest words in Brussels are ‘nationalist and populist’, so whenever there is a ‘no’ vote and one agree with it they say ‘stop being populist.’” Thus Israel gets a bad rap, because in the words of Tony Judt, it is an “anachronism” because it is a nation-state in a supposedly more mutli-cultural world without borders that the EU represents.

This European view of Israel as out of step with European values, he argues, would change if a more left wing government were in charge in Israel. “When I look back at 16 years at EU, it is not settlement policy, it is the complexion of the government, if a Labor government pursued similar policies it wouldn’t be a big deal.”

As the guests picked through the table festooned with smoked salmon and fruit; Hannan emphasized his admiration for Israel’s story. “There is nothing that comes remotely close to Israel, here you have people that for 2,000 years never lost the desire for nationhood; and miraculously that aspiration was fulfilled and for me that is heartening.” 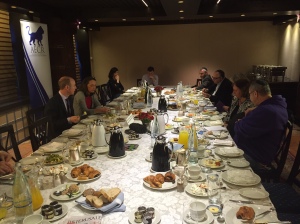 The spread of food at The King David (Seth J. Frantzman)

But his real message was supposed to be a clear view that economics could trump the region’s conflicts. When it came to that his message was mixed. Hannan had travelled to the Palestinian planned city of Rawabi; a massive construction project north of Ramallah that is modeled on Israel’s Modi’in and being developed by businessman Bashar al-Masri. “[It was] amazing to see people focused on something other than politics. There is a natural healthy thing, than nursing grievances. This fantasy of a capitalist based Palestinian entity, it is not so different than how things were before Oslo. It is the politics that divided when the trade was uniting.” However some of those present pointed out that Rawabi is hamstrung by Israeli bureaucracy and red tape; in getting permits and access to roads and water. So, in this weird reversal, the Palestinian capitalist economy is being harmed by the socialist legacies of Israel and, a word that didn’t come up in the conversation, the military occupation of the West Bank by Israel. Wouldn’t Rawabi develop faster in an independent state? No one seemed to broach that issue.

Hannan argued that the Palestinian economy, or the free market in general in the region is “not commiserate with walls and border checks, that’s the basic dilemma.” And on the other side of the coin, the massive largesse thrown at the region by Europe, particularly Palestinians is not helping the conflict or the economy. “Better to create situation where people can make and sell things and not depend on charity.”

Nevertheless Hannan felt that Palestinians are being held back by corruption and other issues in the Palestinian Authority. He noted that abroad, such as in Kuwait, Palestinians achieved economic success. “If you have the rule of law; why Bermuda not Haiti, why Hong Kong not china; it is because of the legal structures, now if you got that right in Gaza; the basics are there; the connection to property; the Arab Spring was launched by a Tunisian market trader; his scales were destroyed and it was a protest for property rights.”

He drew an interesting comparison, noting that for some capitalism is seen as a “western import” to the Middle East and thus bad for the region. However, “Islam was the only major religion founded by businessmen; Mohamed’s last act was to set up a market and say ‘don’t have taxes here’ and the Middle East was based on commerce; the corpatism and statism that theSArab spring was a reaction to; the Ba’athism; that was a Western import.” This is an interesting view, namely that Arab socialist nationalism, which was born in the 1920s or so, was one of the major problems in the region. But if it was, the Arab Spring has not replaced it with a better model.

Although he is optimistic about ending the conflict here, he notes that it will take time. Northern Ireland didn’t find peace until all those who could recall the 1921 Irish Independence issue had passed on. The Great War was not prevented by an integrated European economy. He argues that although Gazans will likely never throw flowers across the border; after another generation things may change. “It will take generations, but that is a good reason for getting started.”