Just finished ‘Good Kill’, which had decent reviews, a well known lead actor and a director, Andrew Niccol, whose director/writer credits have conjured up some other goodies like Gattica and Lord of War. Ostensibly about a unit of UAV (drone) operators in Nevada it has a compelling concept to explore the issue of drone strikes and what the people involved with it deal with.

But this was a terrible disappointment. With a weak script, little if any character development, ham handed lectures to the audience, cliche-ridden stereotypes of the military; it was like a drone strike on the audience’s intelligence.

From the first five minutes it is obvious where this film is going. Yes, we know that the drone operators face moral qualms. Yes, we know they kill civilians. But the portrayal of the one-dimensional stereotypes is maddening. The “CIA” orders them to “double-tap” civilian targets again and again through a speaker phone so it conjures up the obvious facelessness of the CIA. And of course each time the characters point out the presence of civilians they are told to kill them anyway, as if the main program of the CIA is to kill civilians. 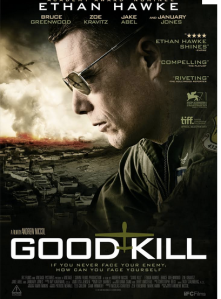 The disputes over their mission lead to such brilliantly conceived lines as “we are no different than Hamas” and “we are a terrorist making factory, drone strikes cause terror.” Yawn. I mean that can be conveyed without a speech by the only female soldier. Is it a surprise the director chose a woman to express the squeamishness of the mission; while having two other Air Force officers who give gung-ho explanations of “a good Taliban is a dead one” and “do you think the terrorists cared about children on 9/11.”

It feels like the movie was written by a college drama class. It has little authentic feel to it and plays to the concept that soldiers are all morally unhappy, drunks, who are an inch from beating their wives and never seem to take off the uniform.

One can make a movie critical of the drone strikes or the military and also have a good script. And a director should not be given points for critiquing the drone issue while having a weak script and allowed to get away with such a worthless, weak, boring, immature, uninteresting, one-dimensional film.

The only positive note is that the acting by Ethan Hawke is respectable and the cinematography and camera work are finely done.

One response to “Review of ‘Good Kill’ film”