Last Friday two car bombings killed anti-government Sheikh Wahid Balous and 25 others in the mainly Druze town of Suwayda (Swaida), a small Druze city in southern Syria which is the center of a Druze area.  Suwayda was the capital of the short-lived Druze state and autonomous region during the French Mandate.  After the bombing Druze activist Izzat Salloum speaking to ARA News, said the attack was aimed at weakening and destabilizing the Druze stronghold in the area. “We are aware that Assad regime has been trying to ignite the flames of sedition among the Syrian communities, while claiming to protect minority groups. Whoever is behind these attacks aims to stimulate a sectarian conflict in southern Syria,” he said. 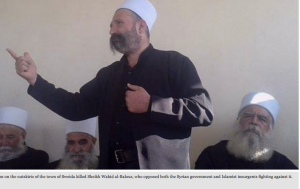 Suwayda itself has remained within the Syrian regime’s orbit and has played a key role in stemming the tide of ISIS and also Nusra.  The area near the town, including two airbases, have been the scene of heavy fighting as recently as June. The immediate assumption after the killing of the sheikh was that the regime was behind it.  “Soon after the bombings, clashes erupted outside police stations and security offices that killed some security agents, local resident and activist Tarek Abdul-Hai said.”  It is thought six regime soldiers were killed by local Druze in retaliation.  Some reports claimed a statue of Hafiz Assad, father of the current Syrian leader, was pulled down.

Analysts also claimed it was clear Balous was a “headache” for the regime.  There had been “growing opposition against him and that “the system can not face organized opposition led by audible leader,” writes one Aleppo journalist.  The regime feared that Balous might go over to the ‘revolutionary’ rebel forces, the insider claims, which means the non-ISIS and non-Nusra rebels.  The regime calculated that such a switch could be catastrophic and it was better to kill him and weather the storm.  With him gone, the soft Druze opposition in Suwayda would be headless. 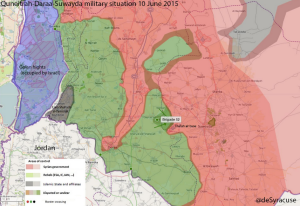 The military situation in the province two months ago

Aymenn Jawad al-Tamimi provided an in depth analysis of the lead up to the killing.  He noted, “One suspect [in the killing] is clearly the regime and its supporters in Suwayda, many of whom undoubtedly resented Bal’ous and the noticeable growth in his influence over the past few months, as an increasing number of Druze militia groups congregated under his personality and banner.” However in the wake of the killing, “no significant pro-regime personalities in Suwayda are celebrating the bombing, but rather condemning it as a terrorist attack- a clear attempt to cool tensions and prevent fallout.”

Then on September 6th the Syrian regime media announced they had caught the perpetrator.  “A militant suspected of masterminding car bombings in a southern Syrian province that killed a prominent Druze sheikh and at least 25 others was arrested Sunday after the slayings sparked anti-government protests, pro-regime media reported. Syrian state television said the militant, known as Wafi Abu Trabi, confessed to elders in Swaida province of plotting the bombings and subsequent violence against security forces there. The state news agency SANA identified him as a member of the Nusra Front, Syria’s Al-Qaeda affiliate.”

Case closed. Convenient and easy.  They caught the killer through good police work and he confessed.  It sounds all too good to be true, like the capture of the bomber of the Reichstag in the 1930s.  The Syrian regime has been an expert at assassinations over the years.  One of the Syrian regime’s allies in assassinations is Hezbollah, which killed Rafik Hariri.  Has Syria learned its lesson from the rage directed at it after that killing in Lebanon.  Apparently not.  Assad has been riding a wave of power recently, with the Iran Deal going through, Turkey distracted by the PKK and other issues, he has been able to cement control slowly and come back from the brink.  But the Druze area has been a headache, with Druze refusing to serve in the army outside the district; some deserting the army and demands for more autonomy and critique of the regime.  But here is Assad showing the Druze that this is what happens when you waver.

The story of the arrest of the Nusra perpetrator is too good to be true.  Nusra operates on a frontline fighting Syria, how did Syrian intelligence simply find a Nusra operative and terrorist nearby who had carried out the attack? Why wouldn’t he flee back to his frontline area or a rebel area?  Why didn’t Nusra take credit?  What would Nusra gain by killing a Druze sheikh who was critical of the regime.  The last time Nusra murdered 20 Druze in Syria, there was an outcry and the organization even claimed it might have made a mistake.  But for the regime Nusra is an easy scapegoat.