Abu Yusuf al-Sana doesn’t seem fazed by his 72 years. Stocky and strong, he carries himself with a quiet confidence as he looks at the bounty he has created with his own hands. Spread out on the side of a hill at the edge of the Beduin town of Lakiya is his handiwork: a traditional-looking warren of stone buildings. “Tzimmerim Lakiya” is his work in progress, a network of courtyards and shared rooms that can be rented for a holiday. From afar the place could be mistaken for a traditional makam, or sacred tomb, with its domed roofs and large tree in the courtyard, so typical of the ancient tombs like Nebi Musa near the Dead Sea, that once stood out in this desert landscape in Ottoman times.

But this is 2015, and Abu Yusuf has done something more original. Scrounging local stones, some of which probably adorned structures in antiquity, he has built a distinctive offering in dusty and generally poor Lakiya, which is home to 12,000 Beduin in the Negev.

Over the years Israel has seen many initiatives and false starts to bringing tourism to its diverse communities that tend to live on the margins of society. The Beduin are a perfect example of this. The 200,000-strong community is one of Israel’s fastest growing, and also one of its poorest. In the 1970s and 1980s the country built several planned towns, such as Lakiya, for Beduin residents, but many Beduin still live in unrecognized villages, or in parts of these towns that are not recognized. They suffer from lack of infrastructure and basic investment. 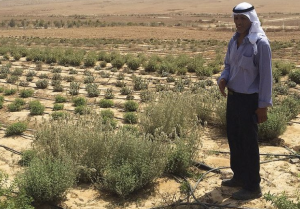 The Beduin have a rich history to offer. The “Desert Magic” festival this year will take place October 3 to 5 and feature eight venues in Lakiya and nearby Wadi Attir. The concept is to draw tourists to the Beduin community and allow the local people to lift the veil on their products and traditions. There won’t be any hokey camel rides here, no contrived belly-dancing or other faux “cultural” traditions. Here is a chance to get one’s hands on the authentic culture, according to the locals involved.

Asad al-Asad, the young and spry proprietor of a local plant and medicinal herb shop, takes us to a long tent in the back of his property. Past the steaming greenhouse, contrasting with the cool air of the plant nursery, the tent beckons with warm coffee and is decorated with traditional tools. A wooden pitchfork is used for threshing and sorting wheat from chaff. There is a bloated sheepskin sack that used to be employed to carry water; another is used to make labaneh. Two round stones are used to grind down the wheat.

Asad grew up in an unrecognized village named Shaib al-Masadieh, north of Lakiya, in the northern Negev. Its 300 millimeters of annual rainfall makes it an area that is particularly fertile. To the south and west, the rainfall decreases and the soil becomes hardscrabble – an uninhabitable desert.

Asad relates that his family lived in this area for more than 70 years, but into the 1990s still lived in tents and followed the seasons with their sheep. “I got interested in the traditional plants through my father,” he says. He recalls that he could taste the difference in the milk from the goats depending on the types of plants and herbs they ate. “I was the youngest grandchild and they used to teach me about them [plants, spices and traditional medicine]. They taught me what to use them for and told me the traditional stories, what was good for headaches and stomachaches. From that point I understood the whole history and tradition of the tribe. So I do tours for schools and lectures about this, and also give explanations to people who come here. We take part in festivals and I explain the tradition of the Beduin,” Asad says.

His traditional health nursery has all sorts of local plants that are common in the Negev. Last year it was one of the festival venues, and some 2,500 people passed through it. He sold plants and welcomed visitors. Asad recounts the tales of some of the various herbs, such as desert sage, the “king of the plants of the desert.” It is called shia’h in the local Arabic and is used to treat headaches and stomachaches. It can also help with blood sugar levels. Asad sells packets of dried sage mixed with other plants for use in tea. Some of the names of these plants are too complex to remember. G’adh or cat-thyme germander has a pungent smell and can help with various ailments. Asad shows us around the nursery and garden; the powerful fragrance overwhelms the senses. 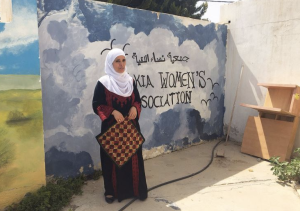 On the wall of the tent is a weathered photo from the 1930s of the Arab governor of the Beersheba district, Araf al-Araf. Al-Araf was a Jerusalem Palestinian, but the British hired him to administer the Beduin areas. In the photo he is seen with the sheikhs of the major tribes in the area. It is a reminder of the long tradition that these tribes bring with them, spanning to today; Araf was so interested in them he wrote a book about Beduin love, law and tradition.

DURING SUCCOT those interested in attending the festival will receive flyers and can explore the roots of this special community. Activities will be free for children and adults, with support the local community coming through sales of local products. The concept is to blend fun and tourism with respect for the traditions; a benefit is helping to preserve them. Towards that end we drive south 10 minutes to Wadi Attir. Here, overlooking a sparse desert valley, is a project supported by the local authority and academics from Ben-Gurion University that seeks to preserve local seeds and plants.

Underneath a large hanger-like barn, a spread of local goat cheese, olives, labaneh and tomatoes beckons. Za’atar is deliciously rolled inside a Beduin-style thin pita with the labaneh and cheese.

Nearby, some goats, cordoned off with stacks of hay, look playfully on. During the festival children and adults are allowed to pet the animals; the managers assure us that the animals have all their veterinary shots.

Ghadir Hani, one of the managers of the 40-hectare project, explains that from nothing five years ago, they are now growing herbs, preserving traditional Beduin seeds and making goat cheese. “We give courses to Jewish and Arab students. We plan to do something large here; there will be compost, lots of goats and bio-gas.” The idea is to show people local food that is organic and free from genetic engineering and the tampering hands of modern agriculture’s mutant plants. There is a large presence of Beduin women playing a role here as well, which helps empower the local communities, they point out. Ali al-Hawashla shows off the local oils and creams that can be made from the various plants.

The ingredients are a secret, but he assures us that these traditional cosmetics can ease pain and help preserve the skin from the sun.

At another part of the project Safiya Morjan, a Beduin woman, shows us some of the seeds from watermelons, pumpkins, tomatoes and zucchini that they are preserving in a kind of “seed bank” to ensure that organic local food products are available for future generations.

In the biting sun of early October, still too hot to be outside long, one doesn’t expect it, but watermelons grow in the Negev.

Back in Lakiya, down a side street, is the Association for the Improvement of the Status of Women: Laqiya, an NGO that helps empower women through preservation of traditional embroidery. The cottage industry allows women to work in the village, close to their families and children. It is a reminder how deeply conservative much of the society remains. On our tour one woman remarked that it was not so long ago that men didn’t want their daughters to become educated, and another said some men didn’t want their wife to work.

“We have been working for 17 years. We started with nothing. We began working with children and women; we wanted to improve status of women. In 2000 we wanted to see what we could build, now we have achieved a lot and many people come,” says Naama al-Sana, a manager of the association. A 49-year-old mother of four, she grew up with 13 siblings, and exemplifies the success stories of women who have found empowerment through work and this organization. She says that last year some 3,000 people came by their workshop to view the beautiful embroidery, and they hope to greet even more tourists this year. Some of the well-appointed journals they sell for NIS 50 are made with recycled paper and include a Beduin embroidered pattern on the front.
Among the last stops on the trip is the guest houses of Abu Yusuf. Near the entrance a woman is crouching over large pots with vegetables, chicken and rice. Sawsan Abu-Gareba is preparing makhlouba, a local dish. She says she does catering for groups and is trying to offer this traditional food to tourists.

It’s definitely worth a try, after eating heaping portions of the tasty rice mixture, along with homemade pita, we couldn’t move and just wanted to go to sleep.

During the festival local cooks will also offer mansaf, a yogurt and lamb dish that is served over rice and is particularly delectable. There will also be a small shuk where handmade traditional jewelry and other items will be for sale.

The Desert Magic Festival takes place October 3 to 5 at Lakiya, west of Meitar, on Route 31