When I was in high school in 1995 I paint a portrait of Yitzhak Rabin on a large canvas. It’s a strange black and white painting, that bears little resemblance to the original photo it was taken from.

Today’s mythmakers and their fellow-travelers abroad who never met Rabin invent tales about him, painting a caricature of this man that also bears little resemblance to reality – and is not healthy for Israel.

“Yitzhak Rabin was a great man, a great soldier, a great prime minister, above all a great leader.” These words, written by national director of the Anti-Defamation League Jonathan Greenblat, could well have been written by any number of the commentators who this week will eulogize Israel’s murdered prime minister. You can tell a lot about a culture and a nation by how it mourns.

In Israel there is an annual event associated with the anniversary of Rabin’s death, and with this twentieth anniversary there is an entire week of mourning events, television programs and commentary devoted to it.

It’s hard to understand some of it. Professor Yedidia Stern, vice president of the Israeli Democracy Institute, sees the killing as a failure of Judaism to respond to the re-creation of a sovereign Jewish state. There is a huge amount of collective guilt and shame and desire to seek scapegoats and find those responsible. At the same time there is a massive industry of hagiography. At its worst it reads like talking points from a North Korean television series on Kim Il-sung, the “great leader”: if not for him the state would not exist, the perfect man, infallible, honorable in victory, dignified in defeat, strong, courageous, articulate, modest, mild-mannered, heroic, handsome, great soldier, academic, intellectual, strong of will but caring and loving, family man, brilliant orator and politician. Caesar. 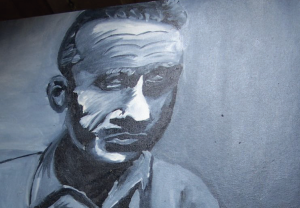 Maybe what Rabin has needed over the years is less of the honorifics and more nuanced understanding.

The admiration for Rabin and the way in which his memory is transmitted in Israel and among some in the Diaspora Jewish community tends to be tinged with a rose-colored melancholy for a lost Israel. This is tied up in nostalgia for the mythological Old Left that once ruled Israel. In some ways it is reminiscent of the old American obsession with John F. Kennedy and Camelot, the ridiculous narrative of Oliver Stone, namely that if only JFK had lived, the Vietnam War would not have happened. But subsequent years have shown JFK’s myth to be fragile. American politics moved on from the old hatreds between Richard Nixon and Kennedy. Israel’s politics can’t move on.

Surveys in Israel continually show that Israelis are losing touch with Rabin’s legacy. A recentMa’ariv poll revealed that only 65 percent of respondents thought Yigal Amir killed Rabin. Other data shows large segments of the population pay no heed to Rabin. Yossi Sarid claims that this is part of the “second assassination” of Rabin, his being forgotten.

The Left holds on to Rabin wishing for the revival of its cause, but in so doing clutches his legacy so tight as to make it impossible for other sectors of the population to take part. Some on the Left, perhaps many, still hold hatred toward Prime Minister Benjamin Netanyahu, whom they blame for creating a “climate of hostility” in the lead-up to the murder.

Sarid noted that when Netanyahu came to the Yitzhak Rabin Center for an event marking the Entebbe raid earlier this year he didn’t offer “a single word of commemoration, let alone expression of regret or asking for forgiveness.”

This section of Israel lives in the past; they still see the rallies before the murder, when “Bibi riled up cohorts on the balcony” in Zion Square in Jerusalem, and Rabin was portrayed in an SS uniform. It’s understandable they don’t want to “forgive or forget,” but it means Israel is held hostage to 1995.

When those like Sarid all claim that Rabin’s policies were “buried with him,” it seems that the death of the two-state solution is a self-fulfilling prophecy. Only Rabin could bring about two states, he died, so Israel will fail now. You can see in foreign op-eds the slowly emerging feeling that Israel has no future. Two professors write at The Washington Post that real Zionists must boycott Israel and force it to leave the West Bank, while Assaf Gavron claims the country is on a “downward spiral into a savage and unrepairable society.” The death of Rabin is intricately linked to the alienation that many Israelis and Liberal Zionists in the Diaspora feel from Israel. It feeds a kind of self-flagellating cult, a religion of inescapable Israeli failure.

THE PROBLEM is that the entire edifice is based on bad history. For instance, Lev Grinberg writing at +972 claims that when Rabin died he was hit by “three bullets that killed Israel’s left wing bloc.” In this narrative Israel’s “left wing” parties consisted of Labor, Meretz and “the Arab parties” and only Rabin could have brought this together. “Rabin brought them [Arab parties] in, and his assassination shoved them out.”

Peter Beinart also believes this story, claiming in an article “that between 1992 and 1995, Yitzhak Rabin, [was] the one Israeli prime minister who forged an alliance with the Arab parties.”

Which Arab parties were those? There was only one Arab party in the Knesset after the 1992 elections, the Arab Democratic Party led by Abdul Wahab Darawshe. The other “Arab” party was Hadash, which is a joint Jewish-Arab communist party. According to the Historical Dictionary of the Arab-Israeli Conflict, “Despite its desire and efforts, Prime Minister Yitzhak Rabin was not prepared to include the ADP as part of the ruling coalition.” The Knesset website confirms that the ADP and Hadash were not part of his government. The ADP did support the Oslo Accords in the Knesset and was able to obtain some financial support for education in the Arab minority sector in Israel.

Was that Yitzhak Rabin’s great “alliance” with “Arab parties”? More like a political deal with one Arab party.

The modern narrative of Beinart and others doesn’t need to fact-check whether it was “Arab parties” or “party” because the main thing is to look at 1995 through the lens of 2015. Today in Israel the Joint List consists of several Arab parties, so it must have been the same back then.

Yossi Sarid, who speaks so highly of Rabin now, didn’t have the same view in 1990. According to a New York Times article that year, as an MK and leader of the Citizen’s Right’s Movement he said, “The testimony from dozens of soldiers has made one thing clear: The soldiers and officers in the field heard the Defense Minister [Yitzhak Rabin] and top-ranking officers instruct them to beat Palestinians in a policy of punishment and deterrence.”

It turns out Rabin had ordered “force, might and beatings” as a response to the Palestinian intifada. If Netanyahu said the same today he’d be called a radical right-wing racist.

Robert Slater, writing in Rabin: Twenty Years After, notes: “While Israelis did not appreciate the turmoil and suffering, embittered as they had been forced into killing and beating up Palestinians, they supported Rabin’s tough stance.”

Rabin disliked the settlements, to which in a recently released 1976 recording appearing in the documentary In his own words he refers to as a “cancer.” But it wasn’t mere settlement beyond the Green Line Rabin had a problem with. The “cancer” he saw was people taking the “law into their own hands” and settling a “crappy insignificant place” in the West Bank. Settlements in the Golan or Jordan Valley or strategic areas were good strategy, unlike the right-wing “believers” who “if we don’t want to get to apartheid, a million and a half [more] Arabs inside a Jewish state,” had to be stopped.

Bad strategy bothered him. As defense minister he complained that the IDF, in having to run around “450 villages in the West Bank,” could not bring its strength to bear. “Handling an entire population we cannot use the IDF’s principal weapons,” he said. He understood that fighting people armed with stones and knives was turning the army into the very thing he had ordered it to be, a force that meted out beatings. But in his dealings the government was pragmatic, trying to stymie new construction over the Green Line in a November 22, 1992 cabinet decision and then allowing loopholes in 1993.

Rabin was not a great leader, he was a decent leader.

He wasn’t a brilliant military commander. At least he was honest about himself. In 1992, suffering political critiques that he was a drunk who couldn’t handle pressure, he told Hadashot that he had suffered a “breakdown” on the eve of the Six Day War. His hagiographers today could be more honest. There won’t be another Rabin. The invented Rabin so often heard of today never existed. But Israel does exist and they would do well to work on the project at hand, than chiseling on a statue to adorn it when it’s gone.