After a spate of violence in the past two weeks, the populist jingoism of ham-handed solutions is raising its head. “Deport them all,” scream some, or “bulldoze their houses.” Shoot them, seal up their neighborhoods, ban them from leaving, ban them from moving, frisk them, stripsearch them all. This cacophony can seem like normal rhetoric in a society gripped by fear and in which there is a conflict between the rights of some citizens not to be subjected to “whatever means necessary” and the attempt to safeguard the rights of others.

Force and collective punishment seem to be the only answer Israel can come up with in light of the recent attacks. It’s worthwhile recalling today that Yitzhak Rabin had a similar response to the first intifada. As defense minister from 1984 to 1990 he was the point man for dealing with the intifada that began in 1987. “Force, might and beatings,” is what he prescribed to deal with Palestinian stone throwers. The IDF waded into the fight. Soldiers later testified that they were told by Rabin to “break their bones” and “lash into them forcefully and beat them.” That was 1990. Twenty-five years later not much has changed, except the Israeli army and police have probably become more sensitive to the negative consequences of images of mass beatings of protesters. So the beatings have been reduced, but the concept is basically the same: force will prevail in the end.

From every viewpoint this concept is wrong.

Jerusalem is at the center of this latest round of violence, whether it is called a “terror wave” or a “Jerusalem intifada” or a “knife intifada.”

Let’s look at the facts. Since October 3 there have been more than a dozen stabbings in Jerusalem. These began with the killing of two rabbis on October 3 in the Old City by a Palestinian from al-Bireh. Following this attack almost all the perpetrators have been from east Jerusalem neighborhoods. This includes three perpetrators from Jebl Mukaber, two from Kafr Akab, two from Beit Hanina, one from Ras el-Amud, one from Sur Baher, one from Isawiya and one from Shuafat. The residence of the two female perpetrators who attacked a man on October 7 in the Old City and on Route 1 on October 9 is unclear.

Let’s look at the geography here. Kafr Akab and Shuafat are both within Israeli municipal boundaries, but outside the separation wall, meaning their residents crossed through checkpoints to get into Jerusalem. Jebl Mukaber has been the home of numerous perpetrators of terrorist attacks over the years in Jerusalem, such as the Har Nof massacre last year and the vehicular and bulldozer attacks over the years. Isawiya and Ras el-Amud have been the center of clashes with Israeli police almost every week over the past year and a half. 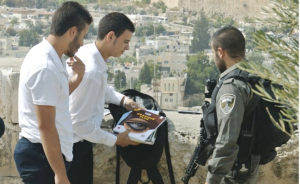 Leaving aside the fact that many of the families of the perpetrators from east Jerusalem deny that their sons or daughters were involved in terrorism, the Israeli response since last Thursday has been to “seal off” Arab neighborhoods in east Jerusalem by putting concrete blocks on the exits to many of them.

Where there are no blocks, police checkpoints have been put in place, often with blocks around them that cars must navigate. It isn’t the first time the authorities decided this was a solution. After weeks of clashes last year in Isawiya, the neighborhood’s main exit was cut off.

It is increasingly hard for those in Israel, or those who support Israel abroad, to have any sense that anything done in the name of “security” is too much. The ostensibly left-wing parties in Israel haven’t toured these Palestinian neighborhoods or spoken to the residents or said anything about the blockades. The large protest on Saturday night in Jerusalem by Meretz, Hadash and Peace Now activists didn’t speak about the collective punishment of east Jerusalem so much as about creating two states. In the absence of two states, it seems walling off or blocking off neighborhoods is acceptable.

But there is something insane about this “solution.” Driving through Sheikh Jarrah last night, where there have been no stabbings and from where no attackers have originated, I found the major exit in the direction of Mount Scopus and Hebrew University cut off, with giant blocks across the road. The other exits had blocks and Border Police at them stopping each driver. On Thursday when I went to the entrance of Isawiya to see the situation, it was striking to see that residents had to take a bus from the center of the neighborhood to the exit and then disembark. They had to then navigate the blocks on foot and lift up their shirts and pant legs to show they were not armed. Then they had to board a second bus near the French Hill gas station and take it to Damascus Gate.

While watching the situation a man came up to me and said he knew me. From where? “I work in [the] JCS [building] with you, you’re at The Jerusalem Post.” It turned out the guy was a cleaner in the building.

It’s striking to think that you work beside someone whose entire neighborhood has been laid siege to. For what? A neighborhood of 14,000, where one man stabbed a 15-year-old Jewish teen on October 4 – and for that 13,999 residents should have to be searched? The residents are good enough to clean up the trash in Jerusalem, to work in kitchens chopping vegetables, and to clean toilets, but they aren’t good enough to be allowed to leave their neighborhood normally, like anyone else?

This is what is called the “united” city of Jerusalem? This is the neighborhood that Hebrew University towers over, where they teach about civil rights and democracy and where the ivory tower pretends to talk about the Enlightenment? It’s easy to dismiss east Jerusalem. “Cut it off,” “seal it off.” The real story might be if it actually were cut off and its residents no longer came to work in West Jerusalem. Who will bake the cakes, carry the trash, clean the streets, till the little gardens? Who will work as the salesgirls at the mall? Who will fill your prescriptions and do optometry for you and work as your nurse at Hadassah Ein Karem. Who will drive the taxis and delivery trucks?

Is it not true that half the Jerusalem economy probably survives on east Jerusalem labor? Jerusalemites like the Arabs who make the entire scaffolding of the city function, but then dismiss them as deserving to be cut off with concrete blocks when a handful commit dastardly acts.

No one speaks for east Jerusalem because only 1.5 percent of the Arab residents vote in municipal elections (they are banned from voting in Knesset elections because they are not full Israeli citizens). So they have no representation on the city council. They are entirely voiceless. That doesn’t mean, like the radical Palestinian organizations and pro-Palestinian voices accept, that stabbing is an act of “resistance,” a “martyrs’ operation.” Some voices believe as long as east Jerusalem is not part of a Palestinian state or its residents don’t receive the same funding and rights as neighborhoods in west Jerusalem, violence is inevitable and justified. That’s nonsense.

The family of Ishaq Badran from Kafr Akab who stabbed an Israeli near Damascus Gate claimed he was angered by “a settler who stripped a Muslim woman of her hijab.” No such thing ever happened, but there was a rumor, widely believed, that it had.

Stabbings and killing are often based on rumors. In a recent article at the website +972 Hillel Cohen argued that the 1929 riots against Jews in Mandate Palestine have echoes in today’s attacks because they both began with tensions over al-Aksa Mosque.

Cohen postulates that not enough was done to stop “inflammatory voices” that brought the “situation to a boil.”

Israel will never be able to counter the “provocations” and rumors, often untrue, that lead to violence. Only by disappearing, and removing all the Jews, who are all seen as “settlers” in the eyes of many, can Israel end its “provocation.”

But the unprecedented response to a spike in these attacks, sealing off neighborhoods, is not an answer for Jerusalem. Most Arabs in Jerusalem don’t want violence, they in fact speak of fear that their young male relatives, their minds poisoned by extremist rhetoric and propaganda, will want to be “martyrs.”

If Israel’s authorities think it is worthwhile to keep Jerusalem united, then they should act to make it united. What the stabbing attacks have shown is how quickly a few incidents can put the walls up and divide the city. The concrete barriers and the Palestinian extremists work toward the same goal: a Jerusalem that is like Belfast, Ireland, in the old days, like what Baghdad became after 2003, or like the divisions in Beirut. The slow death of a city.

Psalm 137 expresses Jewish yearning for Jerusalem, but it should also serve as a reminder that the political control of Jerusalem is a privilege. The ruler is a custodian of the great city. And this method, walling up neighborhoods, is not a solution, it is not being a custodian. It is failing the city.

“L’audace, l’audace, toujors l’audace,” (audacity, more audacity, always audacity), George Danton, the French revolutionary, is quoted as saying. Israel’s city needs some audacity and vision. It may be no irony that New York Mayor Bill De Blasio is in town this week.

They once said New York was ungovernable, and surrendered its streets and subways to criminality. But there were those with the audacity to try to change it. Jerusalem can also have a future that is not violence and concrete.