The media in Israel have found a video of Knesset member Haneen Zoabi speaking in Amsterdam, and the outrage has been quick to form.  She is accused of comparing Israel today with Germany of the 1930s. In her speech she claimed, “It is my honor to speak on behalf of the Kristallnacht victims…on behalf of all the Jews in history who have resisted oppression…During Kristallnacht thousands of Jewish businesses and synagogues were burned, while the Germans remained silent. Today, as the homes of Palestinians are burned, as churches and people are burned alive- the majority in Israel remains silent.”

But before everyone in Israel and abroad points their angry finger at Zoabi, as they always do, let’s remember one thing.  Who started the “Israel is like 1930s Germany” comparison?  Israel’s founding father David Ben-Gurion called his political opponent Zeev Jabotinsky “Vladimir Hitler” in 1933.  Thirty years later, after the evils of the Holocaust were well known, Ben-Gurion was still calling those he didn’t like in Israel “Hitler.”  In 1963 he claimed that Menachem Begin was a “distinct Hitlerite type.” 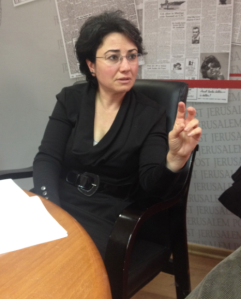 Ben-Gurion also enlisted his political friends abroad to compare Israelis to Hitler. On December 4, 1948 Albert Einstein and Hannah Arendt signed a letter to the New York Times protesting the visit of Menachem Begin to the US. “Among the most disturbing political phenomena of our times is the emergence in the newly created state of Israel of the “Freedom Party” (Tnuat Haherut), a political party closely akin in its organization, methods, political philosophy and social appeal to the Nazi and Fascist parties.”

The famed Israeli philosopher Yeshayahu Leibowitz, who has streets named after him in Israel, often compared Israel to the Nazis.  He compared Gaza to Auschwitz,   He claimed Israeli soldiers in Lebanon in 1982 were behaving like “Judeo-Nazis” and claimed the same thing about judges in Israel.  In August of 2014, the Israeli professor Zeev Sternehll compared Israel to 1930s and 1940s fascist Europe.  “Why is the case of France so interesting? Because that’s what was done to the Jews there in 1940, even though some had lived there for hundreds of years. They were told: ‘You received an ID card and a passport; now I am revoking them. I cannot annul the Frenchness of a Frenchman, but you are not French, and the citizenship category is artificial.’ That was done to an uncle of mine who immigrated to France in 1929, together with my aunt, in order to study medicine. It was the same in Germany….This is exactly what we are saying to the Arabs today. The potential for the annulment of citizenship exists here, too. Why throw the Jewish state like mud in the face of these Israeli citizens?”  In 2014 327 Jewish Holocaust survivors and their kin published an open letter in the New York Times that also compared Israel to 1930s Europe.  “Genocide begins with the silence of the world….We are alarmed by the extreme, racist dehumanization of Palestinians in Israeli society, which has reached a fever-pitch. In Israel, politicians and pundits.”  Similar to what Zoabi said.

The Israeli newspaper Haaretz has a long history of comparing Israel to 1930s Europe. Chemi Shalev claimed in 2014 that Jerusalem was like Berlin in 1933.  Aluf Benn, the editor of the paper, compared Israel’s laws to fascist laws in Hungary. An oped by Daniel Blatman in Nov. 2014, claimed that Israeli legislation was like 1930s Europe. A colleague of mine attending a private dinner with a professor from Hebrew University heard the professor regal the attendees that Israeli laws were like German Nazi laws. 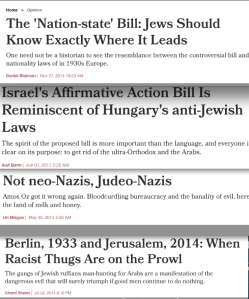 Haneen Zoabi is like David Ben-Gurion, Albert Einstein and many others when she compares Israel to 1930s Europe.  If people are outraged and offended at her, they should be outraged at at all their favorite Zionist heroes, their favorite Israel-prize winning academics and their Israeli press, which has been hammering home, every month the same mantra that Zoabi has said, Israel is like Germany in the 1930s, Israeli politicians are like fascists, like Hungary, or France or Israeli soldiers are “Judeo-Nazis.”  Why not name a street for Zoabi, rather than have this hyporitical media lynch of her for saying what the Israel’s greatest politicians, academics and intellectuals and journalists have said for decades.  Zoabi only learned from Zionism.

I would say they are all wrong, all the ridiculous Zionist leaders and false academics and banal journalists were wrong to compare Israel to Nazism, Gaza to Auschwitz, Menachem Begin to Hitler, soldiers to Nazis for various laws to the Nurembourg laws. But since Israelis started this gross characterization, don’t blame Zoabi for picking up the torch from Ben-Gurion.  The real anger about Zoabi is that she is an Arab woman.  If she was a Jewish male professor, she would get an Israel Prize for this same gross comparison, she would be called “courageous” and be lauded.  But why should Jewish academics in Israel be held to some other standard?  Should they know better, given their expertise on Nazism and fascism?  When they are held to a standard, and not just able to hide behind frees speech, then be angry at Zoabi.