The statements stuck out:

“She was completely unfamiliar with how Israeli westernized society worked – like paying bills, purchasing things with money, or even a concept of time.”

“You have very little concept of what money is!”

I didn’t know what to title this article. “Yes, black people know what money and time is.” Or “when white privilege turns ‘helping’ Africans into perpetuating racism.”  It’s frustrating to see the ostensibly well intentioned person make classic, racist, pejorative, orientalist statements that clearly show their supposed act of “helping” a disadvantaged group comes from the heights of ignorance.  One reaction is anger.  Another is to ignore it, as my wife says, “I don’t have the strength to deal with these kind of people anymore.” I understand that.  But it’s important to confront.

A screenshot of the article

The blog on ‘Times of Israel’ website by was originally titled ‘not all olim are created equal: Why we need to help Jewish Ethiopians” is filled with stereotypes and outright nonsense about the Ethiopian Jewish community based on the utmost ignorance, wrapped in a desire to help.  It doesn’t help people to ‘other’ them and turn them into something they are not.  What’s sad and unfortunate is that the blog is by someone who works at a charity, which is supposed to be helping impoverished, apparently recent immigrants, from Ethiopia. It’s great to help people and its admirable to want to tell their story and expose people to the extreme poverty new olim (Jewish immigrants) to Israel face.  But describing them as illiterate, having “no formal education” and having “only worked in agriculture” with “no experience with technology or how a developed world functions” perpetuates stereotypes that have no place in our time and are factually incorrect.

No concept of time? (Screenshot)

Ethiopian Jews from Ethiopia coming to Israel in the last decade do not come from a society lacking money or formal education.  To claim they “may have little concept of what money is” is nonsensical.  Ethiopia is not the Brazilian jungle of the 15th century (and even in Brazil in the 15th century they had concepts of money).  Yes, they have money in Ethiopia. The Jews who came to Israel in the 1980s, who came from a much less developed rural society than those immigrating in the last 10 years, had access to money.  Many were illiterate, but many had formal education.

In 1941 newspaper reports noted that the Italian occupation of Ethiopia had discriminated against Jews “the property and businesses of the Jews of Gondar wereconfiscated.” But with the liberation that year Jews had “resumed their normal pursuits…tinsmiths, jewelers, shoemakers, blacksmiths with some merchants.”  All of these are businesses that require money.  Yes, they had a concept of money.  In fact the trades that Jews in Ethiopia practiced were not so dissimilar to those practiced by Jews in the Pale of Settlement. They too were shoemakers and tinkerers. So how did a Western Jew, with all the privileges of the West, come to view these poor people as having no concept of money or time?

Because this is the way Israelis talk about Ethiopian Jews.  It is also the kind of stereotypes that are rampant among the upper class Jewish synagogues that seek to do “tikkun olam” and be a “light unto the nations.”  Anita Shapira, the Israeli historian made a similar claim about Ethiopian Jews.  In her recent book Ethiopians are described as having to “transition from the small village in the mountains of Ethiopia to the industrialized, achievement-oriented Israeli society.”   As if people from the third world have no desire to see their children “achieve”, just like anyone born in Boston or Berlin.  No concept of “achievement”, no concept of money, no concept of time.

The author, who has now altered the piece apparently, writes about Ethiopian Jews noting “you’ve never seen a clock and your only concept of time has to do with the sun rising and setting.”  That is “common” she claims. Do those like the author speak Amharic?  Has she been to Ethiopia?  Did she survey the 139,000 Ethiopian Jews that her article claims live in Israel?  What percent have “never seen a clock” and what percent have only the experience of waking with the sun? Where do white people come up with this idea that people in Ethiopia, or other parts of Africa do not have clocks?  This is the same Ethiopia whose emperor Menelik II defeated an Italian army at Adowa. In 1896 some elements of the Ethiopian army had more modern European-supplied rifles.  British commentators noted of the battle, “they [the Italians] had inadequate maps, old-model guns, poor communication equipment and inferior footgear for the rocky ground.”  Who had less of a concept of time?

But in 2016 white people have convinced themselves that Ethiopia has no clocks or that many people living there have not seen one? Ethiopian Jews have often lived in camps for years, camps with clocks.  It may not be modern compared to the Upper West Side of New York City, but it is a development world.

The problem is the Ethiopian olim can’t stand up for themselves against these kinds of stereotypes in English language media.  Although they do have concepts of time and money, the author is correct in noting some are not literate, and don’t read English. 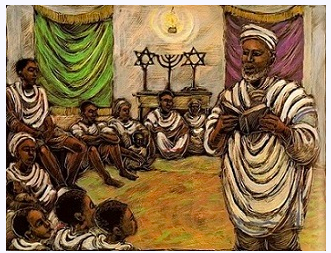 A painting depicts life in Ethiopia, with a book, and yes there was formal education. (link to photo)

These kinds of stereotypes do a tremendous disservice to the people supposedly being “helped.”  When you look down on people and don’t even bother to learn about them and assume the most ignorant notions about them, you are not helping them.  Coming at aid work to people through a lens of superiority doesn’t help them.  Western charities and Jewish charities should teach their employees to respect and learn about the people they work with.  They should not let stereotypes like “no concept of time” and “no concept of money” or “never seen a clock” go unchecked.  They should explain to them where Ethiopian Jews came from and how they lived.  Ethiopian Jewish agricultural and rural life ended decades ago. For the most part those arriving in recent decades have passed through urban environments.  They have also had access to education, often provided for more than a decade with funding by NGOs or agencies related to the Israeli government. 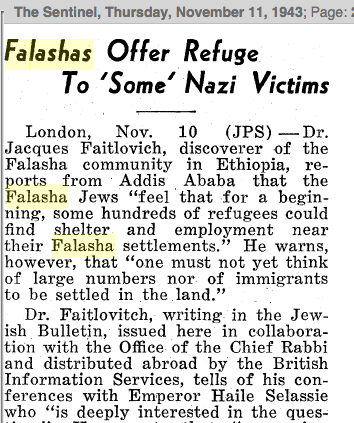 Even when Ethiopian Jews were living an agricultural existence, they were not pre-modern and ignorant.  In 1943 Ethiopian Jews offered sanctuary to Jews fleeing Nazi persecution, an issue that was actually discussed in the Western press and debated in England. Pause and consider that.  Ethiopian Jews knew about the Holocaust and offered sanctuary to Jewish refugees in 1943.  This wasn’t a community with no concept of time and money, illiterate and “rising by the sun.”  These were people in tune with world events, with men who fought against Italian fascism and leaders who inter-faced with the emperor.  This was a community prepared to help European Jews.

No concept of time or formal education? Jews informed the emperor of their desire to help their breathren (JTA story from August 19, 1943)

One response to “Beware! When Jewish activists stereotype Ethiopians in order to “help” them”