Yesterday Benjy Balint posted a fascinating document on Facebook.  It was an image of a survey by Ermete Pierotti, a former Captain in the Corps of Royal Piedmontese Army Engineers, who was appointed architect and engineer by the Ottoman governor of Jerusalem in 1858.  Pierotti documented the demographics of the city in 1888.

What stands out is the two largest groups in the city: “Muslim Arabs and Turks – 10,800” and “Jewish Sephardim – 5,270”.  There were many others living in the holy city as well, including 2,406 Ashkenazi Jews, 1,698 Catholics, 650 Armenians, and communities of Copts, Ethiopians, Maronites and Karaite Jews.

Pierotti isn’t the only one to have surveyed the population of Jerusalem in this period, many other researchers and explorers did as well, including Sir Moses Montefiore.  Some population surveys have indicated a Jewish majority in the city since the 1850s. But what is important from the Pierotti survey is the reminder that at that time the Jewish population was primarily non-European, non-Ashkenazi.

This fact runs counter to the narrative that is presented especially strongly in so-called “liberal Zionist” circles or among the elites in Israel and abroad, who have crafted a narrative of “secular Jerusalem” and how “my Jewish Jerusalem” has “changed”.  Ari Shavit, the resident example of the institutional Zionist “left” wing Israeli elite at Haaretz, who is a regular speaker to American and other Diaspora communities, regularly manipulates history in order to create this narrative.  He wrote in 2013:

Jerusalem has too many Arabs, not enough “Zionists” in the Shavit narrative.  We hear this refrain often.  Jerusalem has “changed” it is being “taken” from the “good” secular, mostly Ashkenazi and European immigrants that have come to it since the early part of the 20th century.  But one wonders, how can a city be “taken” from people who are only a relatively recent large component of it.

It is a bit of a bait and switch when writers claim the city was “Jewish” and that somehow it “changed”.  What they mean is they project back into history their own prejudices about what it means to be Jewish and Zionist today.  For them it is a secular, mostly European outlook. But Jerusalem was never secular and European.  It was always a religious city, it was always a city rooted in the Middle East and that means it was populated by people from the Middle East, indigenous to the Middle East.  Those Jews were Sephardic, or Mizrahi Jews from the region. They were the bankers and builders, the craftsmen and translators, in the city.  They were the dominant force, alongside the Arab, Muslim, majority that remained until the late 19th century.  Even when the Jewish population increased, it was Jews from Yemen and other places in the region, from the Ottoman Empire, that dominated. The first Zionists who arrived from Europe were greeted in Jaffa and Jerusalem, by Jews, by Jews who spoke Arabic, Turkish and Ladino. They were hosted by wealthy Sephardi families. 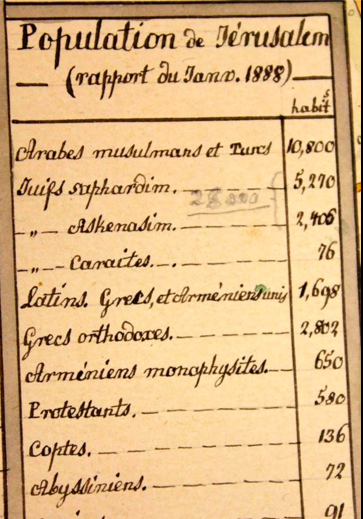 Now we hear from the liberal-Zionist and institutional “left” Israeli narrative how Arabs are a threat to the city, that they must be walled off, or removed from the city. Former Labor party member Haim Ramon claims “The root of evil sprouted in 1967, when the Israeli government made one of the most stupid decisions an Israeli government ever made. It adopted a proposal made by two overenthusiastic senior officers to annex 28 villages, refugee camps and neighborhoods populated with Palestinians to the capital. None of the annexed areas ever belonged to Jerusalem.” The fear mongering is such that people are concerned Jerusalem might get a “Palestinian mayor.”  Like the ones it had before 1948?  It’s interesting how the Arabs who were from Jerusalem, are somehow turned into “villagers” who have somehow threatened the city.  Jerusalem must remain “Jewish“, and of course “secular”, lest it “change.”

Demographic change is a norm in many cities in the world. Alexandria, which once boasted great diversity with Greeks and Armenians, has become a more Muslim and Egyptian city. Istanbul has changed, Amritsar, Baghdad, and Paris.  There’s nothing wrong with change, especially if it is not accomplished through ethnic-cleansing or forced migration, such as happened in Smyrna (now Izmir).  But there is something wrong with manipulating history and narrative in order to pretend that a city is something other than it was.

There was a conscious effort among some European Zionists to hide the Sephardi Jewish influence and long-standing presence in the land of Israel.  From the time of the Second Aliyah there was an attempt to bifurcate and segregate communities into “Ashkenazi labor Zionist” communities and those that were from the “old Yishuv”, the primarily religious Ashkenazi community and the indigenous Sephardi-Mizrahi community.

Arthur Ruppin, a German-born leading labor Zionist from the 1930s pondered “whether there is a possibility of effecting an influence in the direction of purifying the Jewish race…it will obviously be desirable that only the racially pure come to the land.”  This view was echoed in 1963 by German-born Hannah Arendt when she came to Jerusalem to cover the Eichmann trial. “On top, the judges, the best of German Jewry. Below them, the prosecuting attorneys, Galicians, but still Europeans. Everything is organised by a police force that gives me the creeps, speaks only Hebrew and looks Arabic. Some downright brutal types among them…And outside, the oriental mob, as if one were in Istanbul or some other half-Asiatic country. In addition, and very visible in Jerusalem, the peies and caftan Jews, who make life impossible for all reasonable people.”

Note her description of Jerusalem as “some other half-Asiatic city.”  Jerusalem is a city in the Middle East. But in the colonial and European mentality of Arendt it is castigated for having people who “look Arab”, for having people with “caftans”, for having the “oriental mob.”  Her supposition was that Jerusalem should be a European city. Non-Europeans, who were the natives, the indigenous people, were seen as rabble, as disgusting just for how they looked.

Later in 1983 Shulamit Aloni, who would go on to be the Meretz party leader and win an Israel Prize and be adored by “left” wing Jews abroad, would write of non-European voters in Israel that they were “barbarous tribal forces . . . driven like a flock . . . like a roll of tom-toms [drums] in a savage tribe.”

Barbarous tribal forces?  Oriental mobs? Code words for “easterners” or “mizrahim” or “Arabs” from “villages”, people who are not wanted in Jerusalem and are presented as foreign, as barbarians at the gate, taking the city from “us”.  And yet Aloni’s family was from Poland, Arendt from Germany, Ruppin from Germany, Shavit’s family from England.  There is nothing wrong with being from an immigrant family, but there is something strange about being from a family of immigrants to the Middle East (or temporary visitors in the case of Arendt) and then castigating the local inhabitants as “barbarians” and wanting to cut them off from the city they are native to, or to complain that they are “taking over” their own city.  Religious, Orthodox Jews, in Jerusalem are not taking over Jerusalem, they are the Jews who have always been in Jerusalem.  Arabs are not taking over Jerusalem, they are not foreign “oriental” forces, they are the local people and have been for the better part of 1,300 years. Sephardic Jews are the local inhabitants.

What one wonders about all the European stereotypes that some of these “left” wing Zionists express is why they came to the Middle East in the first place if they found it so barbarous, savage, oriental and religious?  Isn’t it odd to come to a place that is in the Middle East, an ancient and diverse city that is known for its religiousness, and then complain that the city is “eastern” and religious and Arab?  Perhaps it would be understandable if they complained that their European city was being “overrun” by “tribal forces” who had moved to Europe, but they were and are guests in the Middle East.

Of course Jews, as a people, are indigenous to the Middle East, but there is something particularly odd about European Jews who came to Jerusalem and then re-wrote its history as a “secular” and “European” city, and have those prejudices for it. The Jews who inhabited the land of Israel 2,000 years ago and who were from the Middle East and shaped its history and who, in one form or another, never left the Middle East, were not secular Ruppins or Shulamit Aloni or Hannah Arendt types.

The secular people are more than welcome in Jerusalem, and they can immigrate to Jerusalem, but they should respect its history, acknowledge its history, and respect it’s people, not impose their views on it. If you think the people are “barbarians” and “oriental savages” and you have a visceral hatred for Haredi or Orthodox Jews or Arabs, then don’t come to Jerusalem. Stay in Europe or wherever.

One response to “In 1888 Jerusalem was mostly Arab and Sephardi Jewish, stop pretending it’s something else”