In Mid-July I travelled to the Kurdistan Regional Government area of northern Iraq to cover the war on Islamic State and to look at other themes of what at the time was a war approaching it’s two year anniversary.

In june of 2014 ISIS arrived in many of the Sunni cities in Iraq, most symbolically in Mosul. Mosul is not far from the KRG capital of Erbil and its history is very different.  Mosul is an ancient river-based trading center.  It’s heart and soul was its mostly Sunni Arab traders.  It was also a diverse city, the heart of the Nineveh plains and home to Assyrian Christians, Kurds and many religious minorities such as Yazidis, Shabaks and Kakei.  ISIS changed all that, expelling Christians in June of 2014 and launching an attack on the Kurds in August 3, 2014.

Within a week of the ISIS attack on the Kurds, their advance was largely checked and they were pushed back.  Over 1,000 miles of frontline were created and a World War One style frontline was carved out of the landscape.  Kurdish peshmerga has swept into areas once disputed with the Iraqi central government, such as Mosul, Sinjar, and parts of the Nineveh plains.  They retook Sinjar (Shingal) in November of 2015, after a long push across the flat plains from Rabia, linking up with Yazidi fighters who never stopped resisting atop Mount Shingal.

Around Mosul a series of offensives in 2015 retook a line of hills and gave them the highground overlooking ISIS held areas. Heroic fighting by groups such as the PAK, and Kemal Kirkuki’s peshmerga have defeated ISIS attempts to regain ground, a police commanders in Kirkuk have uprooted ISIS cells and made the city livable again after years of terror and chaos after 2003.  In many cases the Kurds are forced to contend with the same extremist networks that operated before ISIS emerged from among the Sunni Arabs in 2014.  The same forces that attacked Yazidis in 2007 and massacred hundreds in terror after 2003, the same groups that attacked Wardak, the Kakei village in 2009, and attacked Assyrians and Shabaks, returned with ISIS to commit genocide and ethnic cleansing. 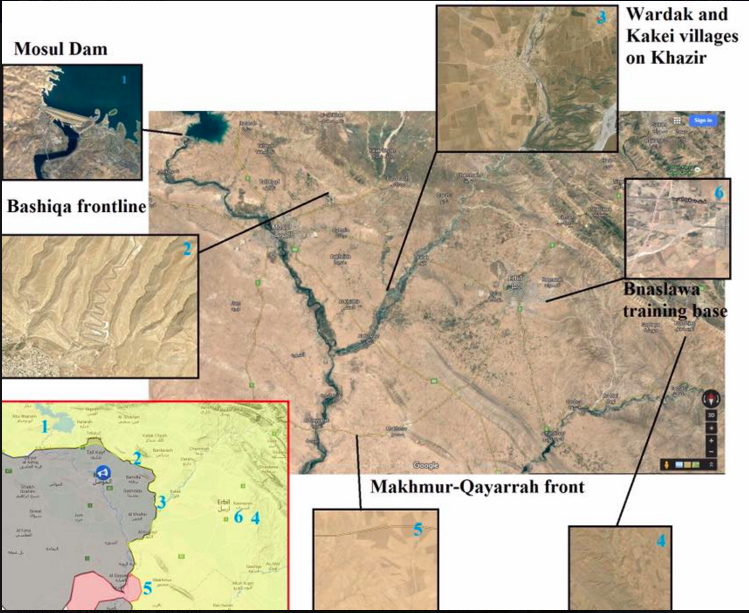 It was my third visit to the Kurdistan Regional Government and the frontlines of the war on ISIS in July of 2016.  In 2015 I’d gone to Telskef, Lalish and Erbil. In December of 2015 I returned to see liberated Sinjar (Shinga), Kirkuk, and visit the frontlines there, as well as take a short trip to Amedy.

This trip began in the north at Mosul dam and interviews with the Rojava peshmerga.

A Kurdish member of the Rojava peshmerga at Mosul Dam (Seth J. Frantzman)

I went to Bashiqa frontlines, the closest to Mosul to see Alan Duncan, a British volunteer and former marksman in the British army who served thirteen years.  He came to the KRG a year and a half ago to fight ISIS and has spent his time on the frontline. He holds a Dragunov sniper rifle and lives in the most exposed position, just 17 km from Mosul, in the tiny frontline position along the road to Bashiqa, framed by little wadis that seem they would make an excellent approach for ISIS.  With mortar fire and snipers, it’s the place to be fight ISIS.  It’s the simply frontline life, with rice and tomato sauce and beans; the men sleeping on mats in a small room, and tea and cigs. The sunsets are pretty, it’s quiet, the floodlights illuminate the area the enemy might come from.  The Hesco barriers and an oddly placed giant concrete square that one can shelter in are all placed about.  There’s no barbed wire above the position, no mines, but a neighboring PAK unit has mortars and heavier machine guns. 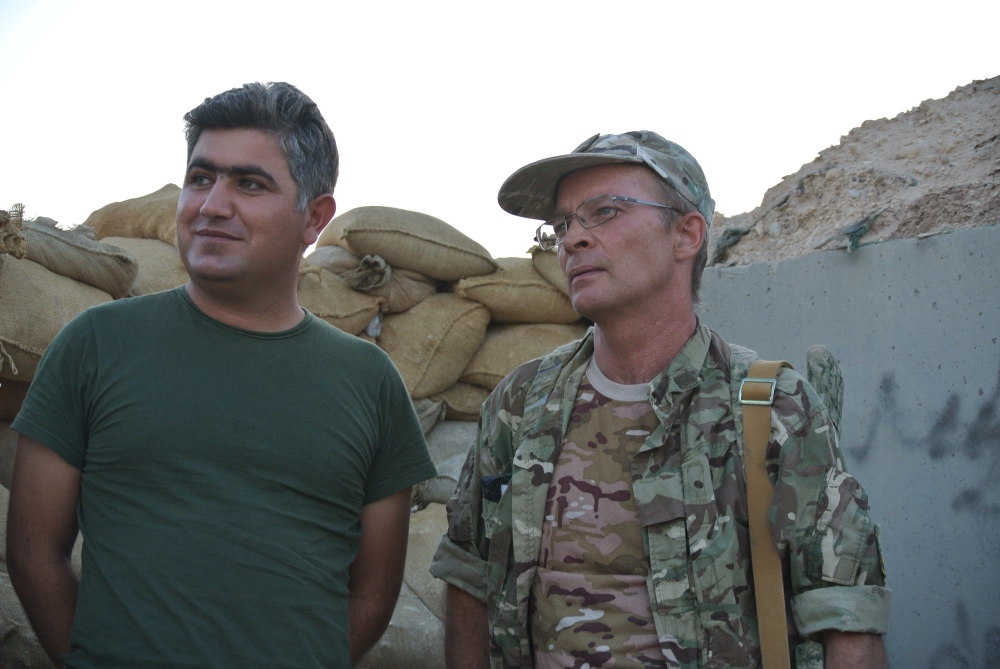 Alan Duncan with a peshmerga commander at the frontline (Seth J. Frantzman)

There are other foreign volunteers and journalists at the command post of General Bahram Yassin overlooking Bashiqa.  He is awaiting orders to push forward and liberate villages from ISIS.  Refugees are arriving every night, 300 in the last few months according to an American volunteer medic named Jonathan Reith.

Even when areas were liberated by Kurds in 2015 and 2016, these villages remained laced with ISIS tunnels, TNT and mines.  Many lost their lives clearing them or setting them off. In Kakei villages the walls were blown out to make secret passages, dirt covered the rooms from digging, fridges were rigged to explode.  The tunnels burrowed deep underneath.  Rebuilding will take time and IED clearance will take time.  There is a war to fight.  The holy tombs of the ancient religions were blown up by ISIS as part of cultural genocide. In just a year ISIS destroyed more than in 1,000 years of history of this part of Iraq.  The Kakei will rebuild their tombs and villages but it will take time.

A Kakei leader and peshmerga officer look into an ISIS tunnel in a Kakei village. (Seth J. Frantzman)

We saw the Kakei villages liberated around Kahzir in May and June of 2016. This is part of the overall defense of numerous minorities by the KRG and the welcoming of some 2 million refugees which now make up some 35% of the KRG population.  ISIS has redrawn the demographics of Iraq and removed all minorities from northern Iraq.  If in the past there was suspicion, there is now total fear.

We met al-Hashd al-Watani, the Sunni militia organized by former Nineveh governor Atheel Nujaifi and which is training near Bashiqa in a cover Turkish-advised operation.  Thousands have been trained, but are they ready to re-conquer Mosul.  The officers of the unit, some of whome spoke glowingly of the “old army” under Saddam Hussein, want to return to Mosul and rebuild the shattered city. 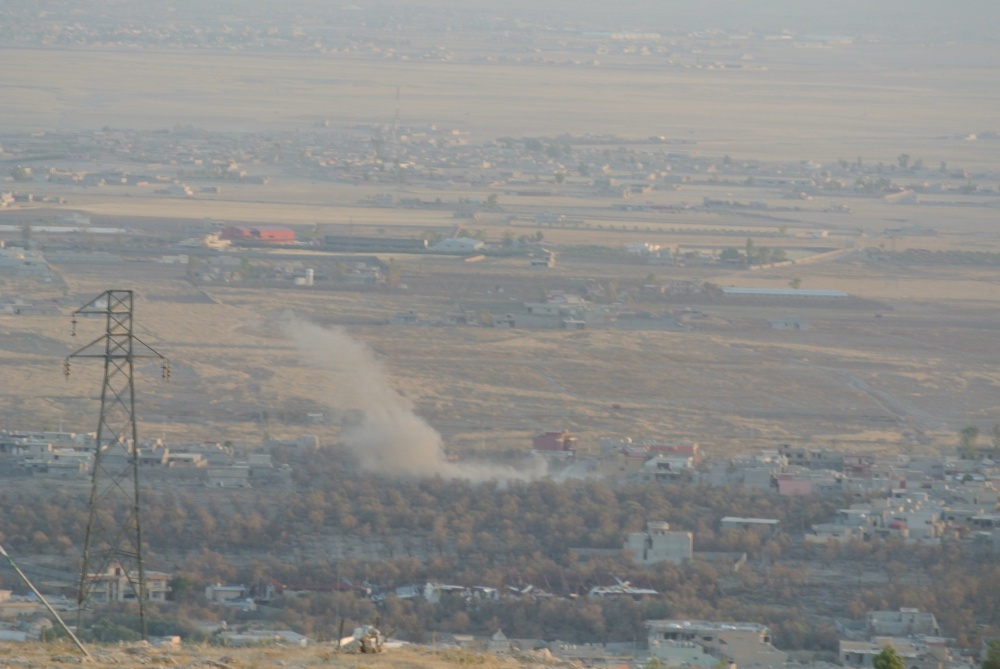 I went to Mosul dam to see if it was truly the “most dangerous dam in the world,” and found that it seems just fine.  It’s in disrepair and abandoned, but its water level is relatively low, in fact it is below the lowest water marker.  The workers were on holiday and they seem to be on holiday often.  The power generators are supposedly downriver a bit.  There is some dispute about how much power it supply to ISIS-controlled Mosul.  The Kurds claim that for humanitarian reasons Mosul receives electricity.  At night one can see the lights of Mosul, and while generators kick on and off in Erbil, Mosul seems to have power.  Where it all comes from is unclear, from a dam in disrepair or ISIS own local energy sources?

Mosul Dam is defended by a group of Rojava peshmerga, women from Kurdish towns in Syria who are in exile in the KRG and yearn to return home to fight ISIS and struggle for Kurdish rights.  Due to inter-party differences they cannot return to Syria because of disputes with the PYD.  So they serve in Iraq as part of a peshmerga unit of several thousand from Rojava guarding the roads from Mosul to Rabia to Snune.  Some of these Rojava peshmerga served in fights against ISIS in this area from 2014 to today.

Arab refugees from ISIS arrive at a Kurdish checkpoint on the Makhmur-Qayarrah road on July 18, 2016 (Seth J. Frantzman)

At Makhmur we see the Iraqi army base and the US-supplied humvees being uparmoured for battled in Qayarrah about 25 kilometers to the west.  We could see the smoke from the fires that ISIS lights to obscure their positions from the coalition.  The coalition has a base in Makhmur as well called Camp Swift.  There is an uneasy feeling between the peshmerga and Iraqi army that is transferring equipment to the front.  The Iraqi Defense Minister came and went on July 18 and opened a crossing over the Tigris river.  Perhaps like the Babylonians of old he opened that bridge, to reconquer Iraq as so many others have done.

Out at the last Kurdish checkpoint, maybe 10 kilometers from Qayarrah, the driver paused. “Don’t go further, the Iraqi army will harass you,” said the Kurds.  The driver thought to go on.  We decided to sit and speak with refugees.  Hundreds are fleeing ISIS a day.  Some walk 45 kilometers to do so.  Many women, young children, even a baby born a few days ago.  Men come on trucks with their wives and are searched for IEDs.  Some may be former ISIS members.  The women have brothers and sons fighting alongside ISIS.  They claim they are forced to do so.  There are no international NGOs near the front, no aid.  The Kurds give water. A few members of al-Hashd al-Watani help the refugees.  This is the end of the world we saw, the dust, the fires of hell in the distance, the forlorn faces, the Iraqi army, with its bedraggled men, seemingly with low moral, discouraged, disheartened. Suspicious.

Kurds listen to a de-brief after a live-fire training at Bnaslawa (Seth J. Frantzman)

A training camp southeast of Erbil, in the hot, Arizona-like desert, but hotter, trains Kurds to fight ISIS and standardizes the peshmerga forces into a more regular army.  There are some 300,000 peshmerga but the coalition has been trying to “build partner capacity” through training thousands of them in the last year and a half.  Two brigades have been put in the field.  After up to 10 weeks of training the Kurds receive an M-16, helmets, body armour, mortars, and many of the other basic items their units lack.  There is training in small unit tactics and most importantly in anti-IED and anti-mine operations.  Seven nations conduct the training.  The Germans train in anti-tank panzerfausts, the Italians show them how to attack an enemy position in the field.

All of these skills are important for the Kurds who have been excellent and patriotic fighters against ISIS but often lack basic skills in terms of professional modern army capabilities.  Many frontline units will complain they don’t have anti-tank weapons, or even basic medic.  They don’t have modern anti-IED equipment and lives are lost.  Most units lack mortars or have only some heavy weapons at their headquarters.  Casualties are evacuated with pickup trucks.  SO this is life-saving training being given, as part of the larger coalition war effort of air strikes and special forces and artillery support. The Kurds are also receiving financial support for the peshmerga from the US.  Given the peshmerga’s divided nature, its political differences and other issues, this professional and financial aid may help weld a new force. 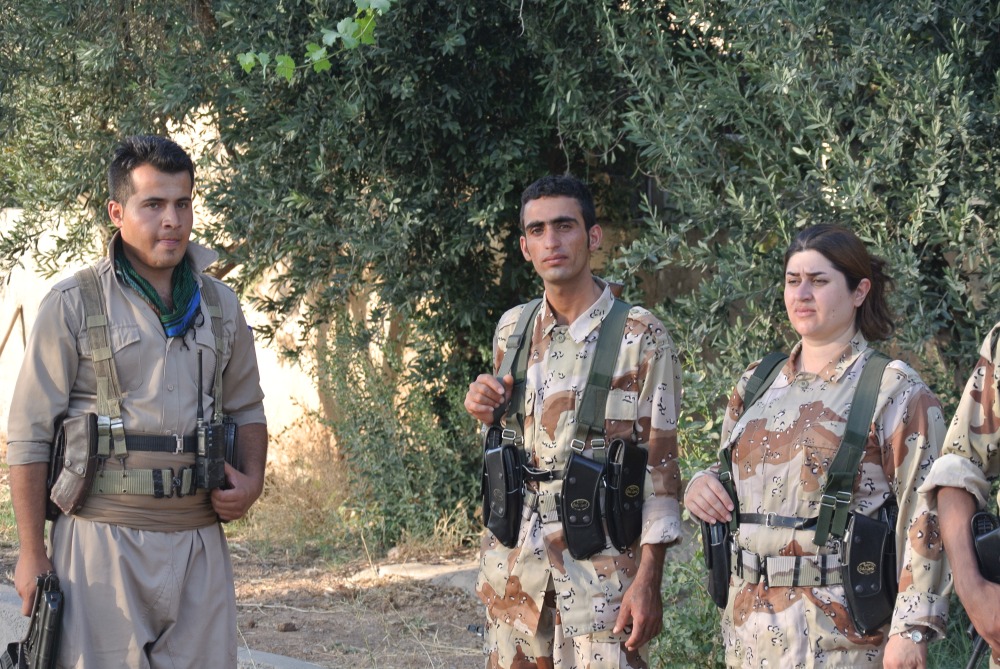 We met Mustafa Hijri, the 71-year old leader of the PDKI and also some of the new recruits who are training to go to Iran to struggle against the regime.  The PDKI is an old and established party in Iran, but Iran’s strength after the Iran deal and its meddling in the region has made the Kurdish struggle for rights in Iran a necessity to remind the world of the Kurdish suffering.  It also means that the Iranian attempts to meddle in Iraq may backfire with Kurdish aspirations rising in Iran and forcing the focus to shift.  There are also other Kurdish groups in Iran, and other minorities, such as Azeris, and everyone wants to oppose the regime on their own initiative.

The young women and men are motivated to return to Iran.  There is something striking about the fact that in Iran women must cover there hair, but here in a secretive area in northern Iraq, Iranian Kurdish women dress as they please and learn the methods of war.

‘One mile from ISIS feels safer than Europe to peshmerga,’ July 16, 2016 The Jerusalem Post

‘Iranian Kurdish leader tells ‘Post’ about Iran and why Israel should support them’, July 20, 2016 The Jerusalem Post

‘Mosul Dreams’: The interplay between the KRG, Iraq government and international coalition, The Jerusalem Post,  July 29, 2016