In May of 2016 more than 5,000 Peshmerga, including Zerevani special forces, liberated nine Kakei and Shabak villages that lie near the Great Zab and Khazir rivers. On the first day of the offensive the vilages of Wardak, Kazakan, Tulabend and Kulabur were retaken from ISIS. By May 30 nine villages were liberated from the extremists. In late August a new offensive pushed the frontline forward another 14 kilometers from the Khazir river and along the Gwer frontline towards Mosul, liberating 11 more villages.

We journeyed to see this area in mid-July.  Driving out from the local peshmerga military headquarters one crosses the trenchlines of the war from the last two years.  There are destroyed buildings and abandoned shops.  In June 2014 when ISIS swept into Mosul this area was clogged with many refugees, including many Christians forcibly expelled from Hamdaniyeh and Nineveh plains.   In the liberated villages IEDs lace the houses and removing them is a dangerous and slow process.  The local peshmerga officer says that of the 14 units deployed here, two are made up of Kakei who have joined the peshmerga.  The Kakei are a local minority religious group persecuted by ISIS. There were 10,000 Kakei here before 2014.  Now just a handful of men have returned. The road to Wardak village passes through a dry, parched and deserted landscape (Seth J. Frantzman)

The Kakei men say they were targeted by Islamic extremists in the past, persecuted for their beliefs.  In 2009 they built trenches around their villages and armed men had to patrol against Al-Qaeda and other extremists.  He says 1,500 men have joined the peshmerga. “Every Kakei wants to be part of Kurdistan in the future,” the men say, explaining that they prefer Kurdish administration of the KRG, than the Iraqi army. 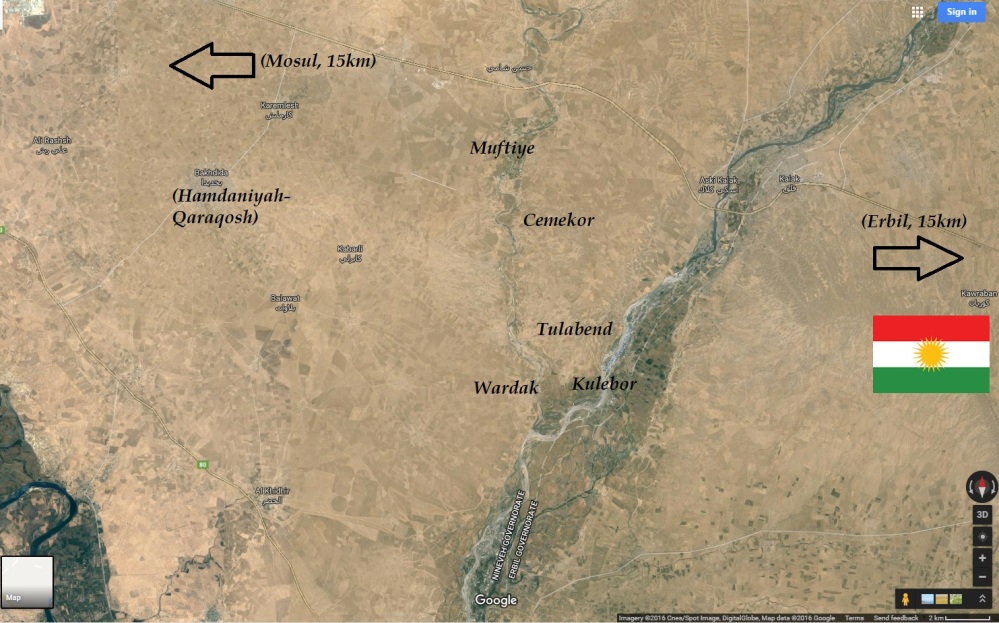 A map shows the villages that have been liberated Everywhere off the main road, which has been cleared of mines, there is ordinance, and dangerous explosives.  when the villages were liberated ISIS left fridges rigged to explode, fans and numerous other devices to main and kill the liberators. ISIS tunnel through the walls of houses to avoid coalition drones from see their men as they moved from house to house. 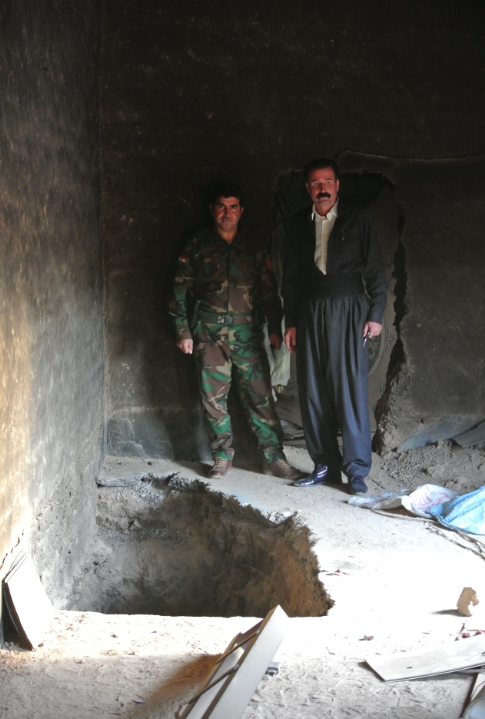 In many houses ISIS build tunnels.  This one was 2,000 meters long and linked several houses.  The dirt was stored in rooms.  The stench from the tunnel is ghastly, like death. It’s dank and covered in soot. 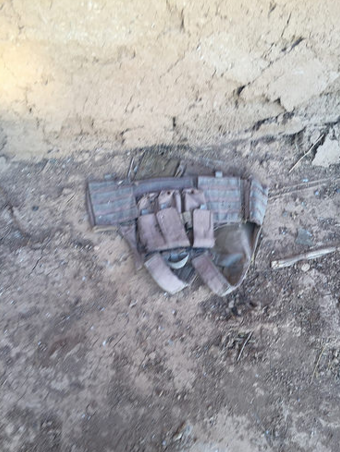 The abandoned tactical vest of an ISIS member.  Food and boots and other supplies were found when the villages were re-taken. A local Kakei leader speaks on his phone in front of a damaged home in Tulabend village. The temple of Babi Haider was blown up by ISIS, part of its cultural genocide against minorities.  In other areas in Nineveh ISIS destroyed ancient monasteries and churches, it bulldozed archeological sites such as Hatra, and destroyed Yazidi temples. It destroyed thousands of years of civilization in this diverse area. 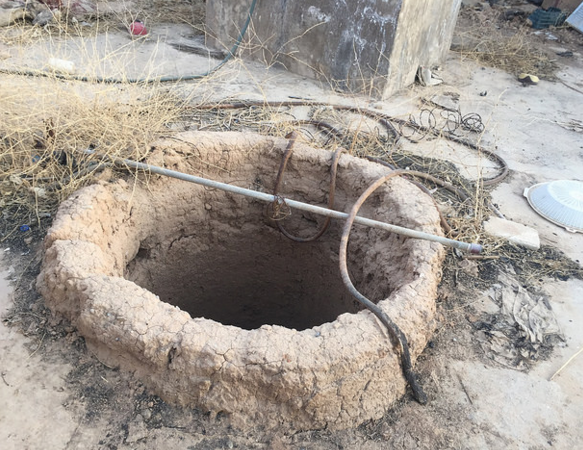 An old well in the backyard of a home. 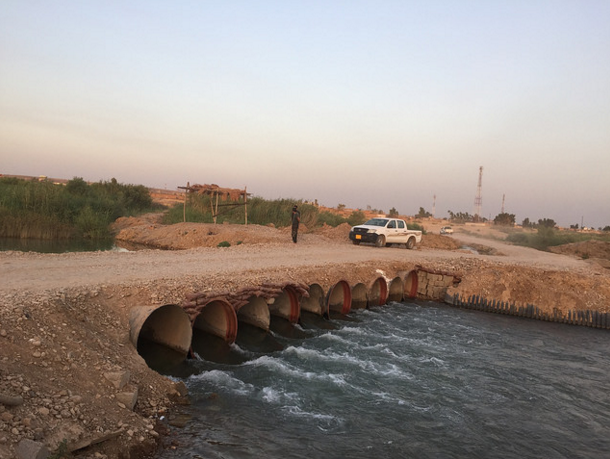 A river crossing near Wardak.  A bridge here was destroyed during the war.  This is the same area where Al-Qaeda attempted to blow up Wardak in 2009, killing 25 people. 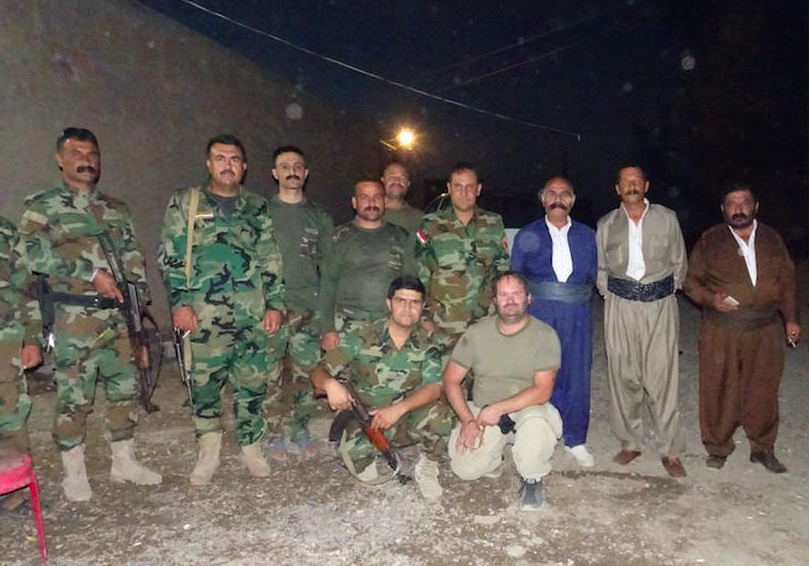 These Kakei men joined the peshmerga to defend their land after 2014.  Some of them have been fighting extremists for years.  The man in the khaki on the far right named Ismail Hamid Selim helped stop extremists trying to drive a truck bomb in Wardak.  The man on the far right lost his brother to an ISIS IED. “I joined peshmerga when ISIS came in June 2014 and since then I haven’t seen my family for more than 10 days at a time; we believe we must hold our guns and protect our villages and push ISIS back,” says Habeeb Kakei. Erasing Islamic State graffiti.  The Jihadists left behind graffiti throughout the villages. 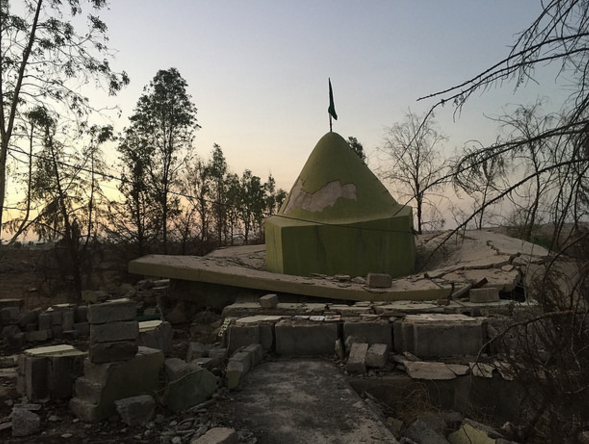 At Said Qambr temple and graveyard ISIS blew up the holy site. 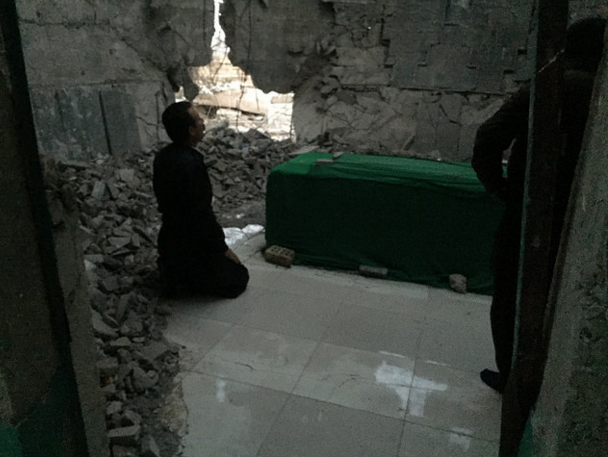 A Kakei man prays at a holy tomb damaged by ISIS

A grave damaged by the extremists. Driving back towards Wardak at sunset, the peshmerga frontlines facing ISIS are seen in the distance.  Only 30 kilometers from Mosul, the men here are prepared to liberate more of Nineveh in the coming months as the Iraqi army and Peshmerga close in on ISIS last stronghold in Iraq.

The locals say they want support to return and rebuild their lives. “The international community should be rebuilding this area and cleaning these villages; we need 2 million dollars just for electric infrastructure. The ISIS plan was to destroy civil society and destroy the identity of our people; that is why they destroyed the houses; they booby trapped them also.” Here one can see a video from July of a temple destroyed.