In August 2014 when Islamic State overran Sinjar, attacked the Kurds and pressed its offensive towards Baghdad a US-led coalition of, at times, over sixty countries was assembled to confront ISIS.  Each country decided independently what they would contribute to what became known as the Combined Joint Task Force: Operation Inherent Resolve.

A key aspect of the coalition’s relationship with the Kurdistan Regional Government has been to build up the capacity of the peshmerga to both resist ISIS, which they have done effectively since mid-August 2014, and to go on the offensive.  As part of that the coalition has been increasing its partnership with the Kurds in an “advise and assist” program, as well as training through the Kurdistan Training Coordination Center based in Erbil.  As the US and its partners increase their role ahead of the liberation of Mosul, the close coordination and increasing support for Kurdish peshmerga is apparent.  One post from the US army website noted that the coalition was now helping to feed 30,000 peshmerga a month and fueling 11 brigades as they work closely with Task Force Falcon.

The KTCC has three training bases, one in Bnaslawa near Erbil, one in Atrush in the mountains near Duhok, and a third closer to Sulaymaniyah called Menila.  We went to Bnaslawa in July and spent a day seeing the training.  Here are some of the photos.

A Kurdish man watches his unit practice small unit tactics as the men “bound” up a hill to capture an enemy position. A coalition spokesman who served for years in Iraq says he thinks they are doing a good job. “They are good at that and they have this experience and they have been fighting for decades; they are great fighters.”

Many coalition partners are involved in the KTCC training, including Italians, Dutch, Finns, Germans, Hungary, Norwegians, the Swedish and the UK.  For the small unit tactics the Italians are coordinating the infantry.

Kurdish men listen to a German lecture on the Panzerfaust 3.The anti-tank weapon has been in service with the Germans since 1992. The 3 foot long weapon weighs 15 kg when loaded.  Every bit of training at Bnaslawa is different.The Panzerfaust is a three week course. The KTCC trains at different levels as well, including for company and battalion staff, as well as average soldiers. They train on mortars, logistics, signals and other necessities for a modern army.

A Kurdish peshmerga shows how to assemble and aim the weapon.  Live fire for heavy weapons is carried out at Atrush, not here.  “Our platoon level infantry course is 6 weeks. The men coming here have combat experience but not like we are used to, and we want to make them better. We want them to be more efficient when they go back to defeat ISIS. They are enthusiastic and willing to learn but they complain about the heat,” says one of the trainers. “It’s difficult when they have learned it one way and to tell them not to do it that way than when to teach them first the wrong way.”  However when it comes to anti-tank weapons the Kurds have been chronically short of equipment.  Every Kurdish commander I spoke to complained about lack of supplied.  “Send us MILAN weapons systems, they said.”

The badge of the KTCC. In the 8 week course taking place in July and August there were 500 Kurds, including some women, taking part at Bnaslawa. In all more than 8,000 trained have been trained in a year and a half.

“The numbers are increasing; now we have mortars here and we want to get the 120mm mortar course started,” says one trainer. “Medical training is done here in Bnaslawa; now the coalition is teachings tourniquets; for them a medevac is the back of a truck; we want to improve that.”

All eyes are on Mosul.  The Iraq army took Qayarrah air base in early July and took Qayarrah itself in late August.  That’s 40 miles from Mosul along the Tigris river, but it requires clearing IEDs in the town and getting Q-West, Qayarrah air base, up and running so the coalition can use it. The US said it would send an additional 500 troops to Iraq in July and is weighing sending more.  This is in addition to the work being done at Camp Swift in Makhmour, he special operations advise and assist that is carried out along hundreds of kilometers of front line, and the Karasoar firebase.

A Kurdish peshmerga looks back s his men complete a small unit tactic training. As part of the program for training the peshmerga are kitted out with M-16s, body armor, helmets and matching uniforms.  These are key ingredients in a massive force like the peshmerga that at times resembled more a paramilitary militia than a formal army.

The volunteer force is patriotic but its limitations were shown during the ISIS offensive of August 2014 when ISIS, using 2,000 vehicles captured from the Iraqi army in June, overran peshmerga positions.  Many peshmerga bring uniforms from home, wear traditional clothing and buy their own kit at stores.  They often bring their own weapons.  The coalition’s task has been forge this capable force into a modern army.

Coalition trainers watch a live-fire exercise.  The coalition built positions to resemble the actual frontline, including trenches and bunkers.  They help the peshmerga coordinate live-fire and focus on targets. “In terms of how your command behaved and what you learned; when you recognize a unit is not hitting a target you can order another position to support them, so maybe two aren’t enough so use more fire,” says a trainer to the men.

German coalition trainers speak with peshmerga who have finished a live-fire exercise.  Many of the coalition trainers are reticent about showing their faces to the camera, they don’t even want their voices recorded.  Some European countries fear ISIS retaliation.

Practice makes perfect.  Kurdish men learn about the math behind mortars in a classroom.

Not everything in war is guns and excitement.  Sometimes the difference between life and death can be trajectories of fire.  When I was under mortar fire in Bashiqa, there was no counter-fire by the peshmerga (a Turkish base nearby provided artillery support).  Many peshmerga positions suffer mortar harassment on a daily bases along 1,000km of frontline. Here the peshmerga learn to up their game against the enemy. “We fielded two complete brigades; body armor, M-16, radios, humvees; enough for 2,500 men. The equipment goes to those who are trained and where they go we don’t track that; it goes via ministry of peshmerga. 80 MRAPS (mine resistant vehicles),” says a spokeswoman. 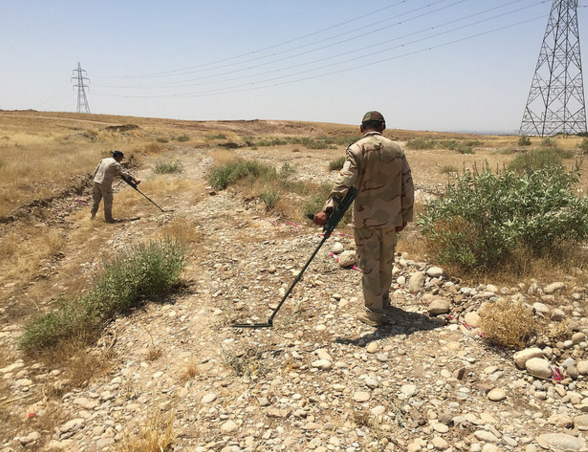 Mine sweeping and anti-IED training is a major component of the KTCC work as well. The coalition learned, through the Iraqi army’s experience and their own during 2003-2009, that combatting IED’s is essential.  ISIS has also been increasing its lethality, digging tunnels, rigging all manner of items to explode. “We teach them how the ISIS tactics and procedures work; and find the threat,” says a British trainer.  The men here clear a road for infantry to walk on.  A four man team with a commander marks the safe route.

“We’ve been here 5 months and done quite a few courses; they train for routes and buildings; every time we get updates we prep them for.  It is a 6 weeks course and specialized in this. They are issued with certain amount of equipment,” says a trainer.

Checking in on a live-fire exercise.

The difference between life and death.  Some towns will take a year to clear of IEDs.  In Sinjar, for instance, the work is ongoing.  The pace of the war is such that armies must move slowly and cautiously, de-mining so as not to incur casualties.

These are the kind of uparmoured “mad max” vehicles that ISIS has been sending against Kurds, and used in Syria and against the Iraqi army. This one was used at the battle of Kisik junction near Tal Afar on March 4, 2016. Destroyed by an RPG, it was brought down to Bnaslawa to remind fighters what they are up again. Two CH47 Chinooks fly over. The large, lumbering helicopters move off into the distance, a reminder that as we watch the build partner capacity part of this mission, there are many other components coming together as well.

A little slice of America.  Back the base near Erbil airport, a soldier pours us some coffee.  There’s a home-town, middle-America, feel to these rooms, with American flags, nostalgia, letters from kids, and a guitar. Some of the US soldiers here have done multiple tours in Iraq.  They saw the invasion in 2003, the insurgency, the surge and then the draw-down.  Now they are back once again.

They have seen how the Iraqi army that the US invested billions in, fell apart in 2014.  They are trying to build it up once again, training and equipping divisions of it for the attack on Mosul. New humvees for the Kurdish forces.  An MRAP in the background and a line of humvees at rest in the baking sun of Bnaslawa.  In the summer Iraq was terribly hot, but by winter when the offensive on Mosul is supposed to come, it will be cooler.  Kurdish forces arrayed in a long ring around Mosul from Makhmour in the south to Sinjar and Mosul Dam areas in the north, as well as Bashiqa, Gwer and Telskef in the East, are ready to move forward.  It’s only a question of waiting for the Iraqi army and coordinating with the coalition.  At least when they move, they will have new training and weapons for good use against ISIS.