“Trump voters, we did hear you, we just thought better of you.” Oh, great, thanks for that headline. Because you know, when you talk down to people and tell them you’re disappointed in them, they often change. “Please, how can we make you proud Mr. Media person.” Please, Washington Post, won’t you pat me on the back. Remember Nick Cohn at The New York Times told us “Clinton has a solid lead in the electoral college, Trump’s winning map is unclear.” Remember Ryan Grim at The Huffington Post claimed that Nate Silver was “putting his hand on the scales” and making it seem Trump would win when in reality other models put Clintons “change at 85 percent.”

Nick did a bit better when he noted, Trump was in “striking distance” of winning the next day. “He’s leading white voters without a college degree by a huge margin.” The Independent concluded “the whites flocked to mister Trump.”  Like sheep?  Like beasts?   BBC explains: “Mr Trump was especially popular among non-college-educated white men, receiving seven in 10 votes from that demographic group and six in 10 votes from non-college-educated white women.” Joel Kotkin thinks those voters aren’t the same blood and flesh exactly: “Instead we have populations and geographies that barely seem to belong in the same country, if not on the same planet.”

But the real word in this election is “Left behind by globalization and multiculturalism.”

“Left behind” has become such a common media banality for this election that it almost deserves a hashtag, #Leftbehind. “Working class whites,” is the cohort that they mean. There are maps of them also, where the “uneducated” people, those “left behind” live. They were so far behind, the models didn’t even find them. “Models underestimated the likelihood of turnout that poured from the relatively less-educated,” says Scientific American.

Franklin Roosevelt, a Democrat, described them with less contempt. “These unhappy times call for the building of plans that rest upon the forgotten, the unorganized but the indispensable units of economic power, for plans like those of 1917 that build from the bottom up and not from the top down, that put their faith once more in the forgotten man at the bottom of the economic pyramid.”

Can we talk about these American “forgotten men” for a minute. What does it mean when the media tells us they are “left behind” constantly.  They just aren’t like “us”, in fact a number of NYT columnists were so self-assured that not one reader was a Trump-supporter that they just wrote “we”, “how do we move on,” how do “we adjust.”  Yes, us cosmopolitans.  See, we weren’t left behind by globalization and multiculturalism.  We are enlightened, progressive.  Woke. Not like what some in the media describe as almost sub-humans, those lacking in social Darwinism, in need perhaps of manifest destiny. Those people on a different planet. Two Americas. John Edwards used to patter on about that, but he meant something else. Today when talking about those “left behind” we are more likely to get “The white working class can kiss my brown a**.”

What we mean when we say “left behind” is to assure ourselves that we are ahead, in the front, and that those barbarians somewhere else won’t be getting through the gate.  The “left behind” narrative works because it views the others as so far removed from mainstream society as to be permanently outside. “Uneducated” is often paired with the “left behind” story. It’s true education tracks well for predicting which states went to Clinton.  The top ten where people have a college education, Massachusetts, Colorado, New Hampshire, Maryland, New Jersey, Connecticut, Vermont, Virginia, Minnesota, California. In those states more than 30% have a B.A.  In the bottom states its around 24% or less. You know, Trump country. Bush country. Palin country: West Virginia, Arkansas, Mississippi, Kentucky, Alabama, Indiana, Louisiana, Wyoming, Maine, Idaho, etc. Why are they uneducated?   The US has a national education system, right?

Are they truly left behind when it comes to education?  Urban ghettos have lots of uneducated people, right? Among African Americans in 2008 a total of 19.6% had a college degree.  The number is higher today. So it’s not education. What we are really talking about is a rural ghetto. That is the place where “globalization” and “multi-culturalism” doesn’t penetrate. 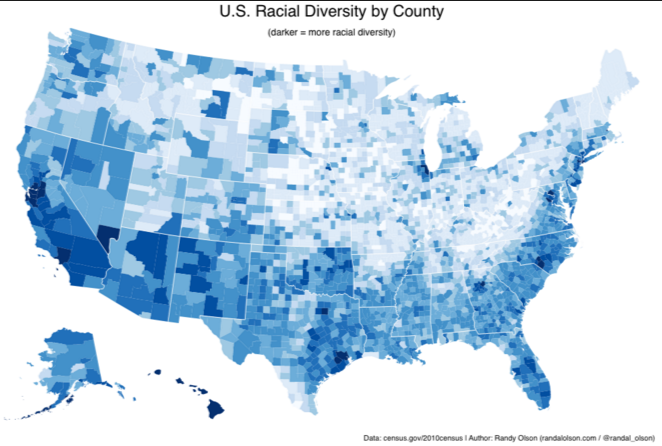 What is globalization?  How did it leave them behind? Did multiculturalism really leave them behind? In the sense that there is less racial diversity in some parts of middle America, yes there is less multi-culturalism. But when media says multiculturalism, they mean something more.  It’s not about diversity per see. Many white left-leaning academics don’t have such a diverse social circle.  They mean they like multi-culturalism and pay lip-service to it. Globalization? Do the left-leaning elites truly like it? Who are the protesters against the IMF, World Bank and “globalization,” isn’t it also white elites?

It’s not that people were “left behind,” they were purposely left behind in a rural ghetto by people who styled themselves as superior to them and didn’t provide them equal education.  The self-fulfilling prophecy, a kind of new social darwinism or eugenics, of deciding that the rural “whites” are left behind, puts them in a place where there is no hope of catching up. They weren’t left behind, they were jettisoned.  When the pundits were telling us before the election that the less educated whites are voting Trump and that his path to the White House is blocked, they were saying “demography has had its say.”  We beat them by isolating “whiteness” and putting them over there in the rural white ghetto where we mock them for having white privilege and then tell them there is no way they can still win elections.

The overall assault on “whiteness”, the frequency in the media with which “you’ve got to see how this white man was put in his place,” is part of a narrative to paint and other the “left behind” group as so utterly savage and barbarous that there is a reason it must be kept behind.  There was no discussion of how to encourage votes from that “white, working class,” the apparent minority.  In the old days people wanted to help those workers and cared about unions.  But no more.  “Those savages and their stupid complaints about manufacturing don’t matter.”

They were not “left behind by globalization and multiculturalism,” there was a conscious effort to divide America into two camps, one of which consists of upper class whites and urban minorities and another of which consists of rural whites. The theory was that this bifurcation will work because rurality is declining, people are becoming urbanized, and uneducated people are declining as a group.  But someone got the numbers wrong along the way.

The stereotypes and nonsense put forth about the “left behind” paints it as a part of America bordering on the film Deliverance. Is this how detached people have become. Have the educated elites become so out of touch, so apart from such a large swath of the country that this unrealistic portrayal works? A New Yorker piece in October captured some of the essence of Trump country. It wasn’t that behind the rest of the country. It’s not so different. But a lot is invested in making it seem that way and denying educational opportunity to it. If someone were to propose, for instance, scholarships to college and quotas for people from the “left behind” category, how would that go over? Once people have been excised from the national consensus can they come back.

This dog-eared, simplistic narrative about “left behind” creates a sense of superiority based often on place of birth and origin in which a kind of false social darwinism of being born into the correctly “global and multicultural” class is reinforced. In a more healthy country there would be more social mobility from the “left behind” and there would be more open-minded discussions about these issues, than just dismissing groups as somehow destined to be outside. It can’t simply be that “white America” is all racists and uneducated. They aren’t so different, and they probably aren’t that racist. But they have been cast that way and easy definition of what “they” are.

The fact is they are not left behind. They are present and part of the national conversation. They are not outside globalization, they are part of it. They are not outside multiculturalism, they are part of it. The more people pretend they are just “over there,” those “left behind” people, the more they appear an other, unable to be educated, unable to be part, to integrate into a national fabric that they are told they are not a part of.  Their “white spaces,” their “white privilege,” their “whiteness”. Perhaps its not that they were “left behind,” it’s that an elite consensus was constructed in which those others don’t belong. Poor. Working. White. Uneducated. “Not one of us.” Serfs. Peasants. Socially unfit.

2 responses to “Oh, just shut up about this “left behind by globalization” nonsense”