“I believed very deeply that the Jews who had survived the Holocaust deserved their own nation, and that they had a right to live in peace among their neighbors. I considered this homeland for the Jews to be compatible with the teachings of the Bible, hence Ordained by God,” wrote Jimmy Carter on page 274 of his 1983 book Keeping Faith: Memoirs of a President.

On November 28, 2016 Carter was still on his biblical crusade for setting things right in the holy land, only this time he was writing in the New York Times about the need for US President Barack Obama to recognize a Palestinian state.  Carter claimed that “38 years after Camp David, the commitment to peace is in danger of abrogation. Israel is building more and more settlements, displacing Palestinians and entrenching its occupation of Palestinian lands.”  He advertised his own role in peace and claimed that his “Carter Center has continued to support a two-state solution by hosting discussions this month with Israeli and Palestinian representatives.”

Then he advocated a bit of UN colonization, in an resolution that “should include the demilitarization of the Palestinian state, and a possible peacekeeping force under the auspices of the United Nations.” Carter was worried that a “one-state” reality was coming into being. “The primary foreign policy goal of my life has been to help bring peace to Israel and its neighbors.”  He wrapped up his epistle with a religious text; “Blessed are the peacemakers, for they shall be called the children of God.” 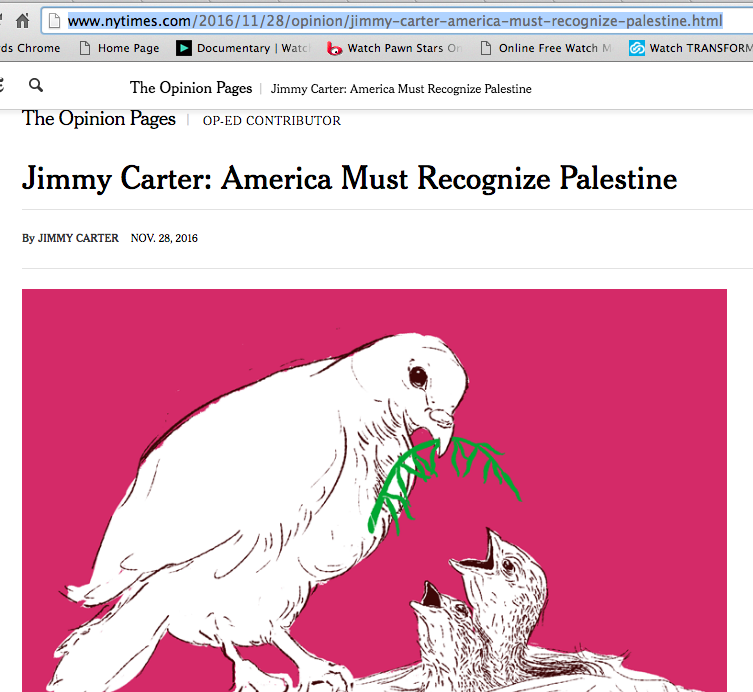 An interesting graphic was chosen to go along with the oped, drawn by Vahram Muradyan it showed a dove feeding to baby doves. The symbolism couldn’t be more clear.  The large mother dove is America and it is feeding the children, Israel and Palestine, who are incapable of making decisions on their own. This is the paternalist lens that Carter and biblically-inspired crusade to “save” the Middle East has always seen the region through.

For decades Carter’s main aim in the world has been to imagine that dictators and religious extremists are peaceful. He sees the good in everyone.  In a 2008 speech in Jerusalem he claimed to have reached an agreement with Hamas to “respect the creation of a Palestinian state in the West Bank and Gaza Strip negotiated by Hamas’s rivals in the Palestinian Authority.”  Carter “said in the interview that he found the Hamas leadership, including Mr. Meshal, to be clear-thinking, educated people who gave no sign of fanaticism.”

There was more, Carter was also waxing positive about Bashar al-Assad in Syria. The leader had told him that “about 85 percent” of the issues between Syria and Israel had been resolved and the Syrian dictator wanted peace “as soon as possible.” The former US President was “impressed with his strength,” when discussing Assad,” in “contrast to what we had heard from propaganda.” Propaganda such as the fact that Assad was a nepotistic dictator running a minority regime that denied millions basic civil rights. In an April 2008 Oped at the ‘Times,” Carter spoke on behalf of Hamas, claiming “Hamas will also disband its militia in Gaza if a nonpartisan professional security force can be formed.” The United States was the problem, because “United States policy is to ostracize the Syrian government,” and Carter wanted the US to stop “isolating” the great victim Assad.

Carter has always had a double-edged agenda in the Middle East.  On the one hand he seems to offer pragmatic “peace” statements, generalized blather about how diplomacy is better than treating religious fanatics as pariahs. He should know about religious fanatics, he grew up in Georgia. Campaigning in 1980 he said “”Obviously the Ku Klux Klan is an obnoxious blight on the American scene and anyone who injected it into the campaign made a serious mistake.”  Just a bit “obnoxious”? Maybe in need of negotiation, not isolation.

Is he thinking what to eat for dinner? (screenshot)

On the other hand Carter is a kind of sweet-looking religious fanatic whose views are not based on pragmatism and peace, but on a religious conviction that he has a role to play. The cover of his book Palestine: Peace not Apartheid emblematic of his outsized messianic ego.  It shows him deep in though on the cover while Palestinians suffer next to the wall Israel has built. Is there anything more ridiculous and self-obsessed than an elderly white man pondering over the suffering of people?

Carter represents precisely why outsiders cannot and should not be involved in their own personal crusades for peace in the Middle East.  They tend to see the conflict as tied more to their own destiny than to the actual people living in Israel and the Palestinian territories.  A peace agreement reflects well on them. They have “saved” the people, just as the Bible has instructed them.

It should be recalled that Carter, who has seen numerous chances for “peace” with North Korea, has a long history of advice he would prefer us to forget. In 1983 he wrote that “Jordan itself is in many ways the natural homeland for the Palestinians” and was keen on the idea of Palestinians only receiving “autonomy” in the West Bank and Gaza.

The US may one day recognize Palestine. But it should not do so because of the crusade of a former President whose meddling, blinders and religious views have infected the peace process for too long.