You’d think it was a major event in US history. “Them against the world,” CNN claimed after a UN resolution condemning Israeli settlements passed with a US veto. It changed the headline soon after. “Obama has made it clear that he’s a Jew hating, anti-Semite. He likes Jews who are his friends but not Jews in general…Obama is sticking it to the Jewish state of Israel” Morton A Klien, head of the Zionist Organization of America, was quoted in the New York Post.

The United States abstained from a vote condemning Israel’s settlements in the West Bank. in UN resolution 2334. The US didn’t support it, but by abstaining it allowed it to pass 14-0 at the UNSC. A quiet goodbye from the Obama administration which was so-often frustrated in their attempts to deal with Israel, and frustrated in general in the Middle East.

Is US abstaining unprecedented? It has been unprecedented under Obama, but other US administrations have regularly abstained from or supported UN resolutions against Israeli actions.

There have been 226 UNSC resolutions relating to Israel since 1948. The US has abstained from less than two dozen of them.

In 2002 the US abstained on Resolution 1345. The resolution came at the height of the Second Intifada and called for the end of the Ramallah headquarters of Yasser Arafat. In March of 2002 Israel had sent forces into Ramallah and invested Arafat’s muqata command center in response to a wave of terror and uprising that began in 2000. The resolution also called for Palestinians to give up on the right of return in return for Israel withdrawing to the 1967 borders and sharing Jerusalem. The US representative John Negroponte abstained from the resolution. China, France, Russia, the UK, Syria and others supported it.

The US abstained on UN Resolution in 1322 in 2000. Sponsored by Malaysia it deplored the visit of Ariel Sharon to the Temple Mount. The resolution referenced former resolutions such as 242 and 228 and in that sense called on Israel to return to the 1967 lines. The US worked to water-down the resolution’s deep anti-Israel language, but still abstained at the end.

In 1996 the UNSC adopted resolution 1073 critiquing Israel’s actions in Jerusalem. It was in response to Israel opening a tunnel near the West Wall and sought to reverse that while also calling for peace talks to continue. The US abstained.

In 1988 the UNSC adopted resolution 611. The council condemned the killing of Fatah leader Khalil al-Wazir in Tunisia. The US abstained.

The US abstained in 1988’s resolution 608 that condemned Israel for deporting Palestinians.

The US abstained on resolution 605 in 1987 in a resolution that condemned Israel for killing Palestinian students. It noted; “Decides to keep the situation in the Palestinian and other Arab territories occupied by Israeli since 1967, including Jerusalem, under review.” The US felt the resolution did not provide any blame to the Palestinians.

In 1986 resolution 592 resulted in a US abstention. It condemned Israel for killing Palestinian students at Bir Zeit university.  The US also abstained on resolution 587 in 1986 which condemned Israel’s ally in Lebanon, the Southern Lebanese Army, for an attack on a UN compound.

The US abstained on resolution 573 in 1985 which condemned Israel for an air raid on Tunisia in response to the killing of three Israeli citizens in Cyprus.

Resolution 517 in 1982 condemned Israel for its involvement in Lebanon. The US abstained.

The US abstained from resolution 452 in 1979 which condemned Israel’s settlement activity. Resolution 446 noted “”that the policy and practices of Israel in establishing settlements in the Palestinian and other Arab territories occupied since 1967 have no legal validity and constitute a serious obstruction to achieving a comprehensive, just and lasting peace in the Middle East.” The US abstained, along with the UK and Norway.

Resolution 344 called for a peace conference in 1973 and the US, France, USSR and UK abstained.

In 1969 resolution 271 condemned Israel over an arson attack in Jerusalem against the Al-Aqsa mosque carried out by a tourist. The US abstained along with Paraguay, Finland and Columbia. Resolution 252 in 1968 condemned Israel changing the status of Jerusalem. The US and Canada abstained. 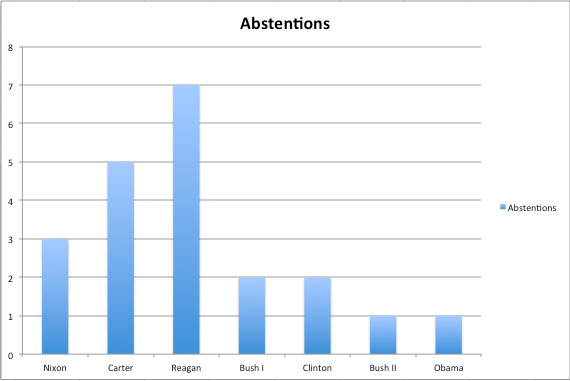 The vast majority of the 200 resolutions the US has supported relating to Israel have involved support for extending the UNDOF (created 1974) or UNIFIL (created 1978) mandate every year since their inception, along with other peacekeeping forces. These are formalities and should not be counted as votes condemning Israel. Along with other votes supporting the end to hostilities, they are not particularly critical of Israel.

Let’s look at other resolutions the US supported that condemned Israel or were critical.

US condemned Israel in 487 in 1981 for its attack on an Iraqi nuclear reactor.

The US co-sponsored resolution 904 which condemned the massacre in Hebron in 1994. It sought for the peace process to resume. Resolution 726 also condemned Israel for deportations and was supported by the US, the same was true of 694 in 1991 and 681 in 1990 and 673 deplored Israel not cooperating with the UN. Resolution 672, supported by the US, condemned Israel for killing Palestinians in 1990. Resolution 641 in 1989 deplored Israel’s deportation of five Palestinians to Lebanon, the same was true of 636 and 607 in 1988.

UN resolution 799 condemning Israel for deporting Palestinians was adopted in 1992 with US support.

UN Resolution 1397, which sought to end violence of the Second Intifada in March 2002, called for a two-state solution and was supported by the US (Syria abstained).

Resolution 1860 (2009) called for an end to war in Gaza, the US supported it. Resolution 1701 (2006) to end fighting in Lebanon, supported by the US. The US also condemned Israel for not cooperating with UNIFIL in Resolution 444 regarding Lebanon.

The US supported resolution 138 in 1960 condemning Israel for kidnapping Adolf Eichman in Argentina. In the 1950s and 1960s the US often supported condemnations of Israel for raids in Jordan (248 for instance) and Syria and other activities. It also condemned Israel for holding an independence day parade in Jerusalem in resolution 250 in 1968. In Resolution 171 in 1962 France abstained and in resolution 228 New Zealand abstained.

The decision by Obama to abstain after 8 years in office of supporting Israel at the UN is unique in the level of support generally shown Israel at the UNSC. In the past the US has often abstained from votes at the UN that were critical of Israel. This was particularly true of the last years of Ronald Reagan and under the government of George Bush Sr. In addition the US routinely supported UN resolutions or abstained during the period of the Bushes, Bill Clinton and administrations before Reagan.

The 2016 resolution is therefore in line with long-standing US policy. That policy has not always been consistent, because the US has sometimes vetoed resolutions condemning Israel, and has sometimes abstained or supported very similar resolutions on similar issues, such as the deportations of Palestinians in the 1980s. There is no evidence the US role at the UN has become harsher on Israel.  In the opposite, the antics of other UN members who used to routinely condemn Israel over minor incidents, have now been reduced.  Israel has also ended her presence in Lebanon, which was a source of dozens of resolutions. It has also ended its policy of overt military raids.  However the UN has largely given up on trying to push through resolutions condemning Israel for actions in Jerusalem.

The result is that the US has moved away from supporting resolutions against Israel to increasingly using its veto and to a lesser extent, abstentions, but the UN in general has become less obsessive and slightly less hostile to Israel.

20 responses to “Abstaining from history: Here’s all the UN RESOLUTIONS on Israel the US abstained on”