Someone at work mentioned “classical music” to me recently and as I was thinking about why we even call it “classical” and not “archaic,” it got me thinking about poetry. My generation is one of the last to have to suffer through poetry in school. It wasn’t all bad. Yeats is fine. But the whole idea of having to learn about poetry, sonnets and all that is fading. It’s fading in favor of obnoxious things such as microaggressions and safe spaces, and Subaltern Studies; words like “normative” and “reductive” are certainly more common than Flanders Fields today.  Poetry is going the way of Marxism and having to know the difference between Gramsci and Bakunin.

It conjures up the 1989 film Dead Poets Society. This film was expertly made to take in an entire generation like mine that was coming of age after it came out. Throughout the 1990s people watched it. It was made to influence impressionable young minds. The script is still admired. Starring Robin Williams as an influential teacher, it won an Academy Award and a two BAFTAs, as well as receiving numerous other nominations. It joins a genre of “teacher” movies. It arrived after Dangerous Minds and around the same time as Lean on Me, but before White Squall.

But what were we being taught?

The film takes place in an all-white, all-male boarding school named Welton Academy. The students have names like Cameron, Anderson, Overstreet, Meeks, Perry, Pitts and Dalton. These could have been Mayflower material, there’s not a O’Leary, Levy, Lopez or Heinrich among them. The excuse for this is that the film takes place in 1959, but even Twilight Zone had more diversity than this. So did the 1957 film The Strange One. 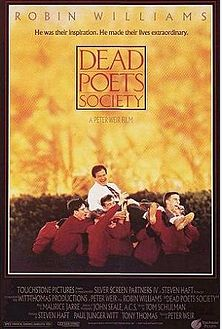 So what’s really happening here? We’re given the glimpse of the life of the most privileged 1% in 1950s America. and we are supposed to identify with these characters. I mean “they could be us.”  And we are supposed to watch this and be swept off our feet by the difficulties these students face. Neil Perry wants to act in a play. That’s his big challenge in life. Taken out of school by his domineering father, he commits suicide. That’s tragic.

What about the other great challenges.  Well one student receives a desk set from his father. Is that Neil again? Anyway, he throws it off a roof.  That sounds difficult, to have received a desk set, rather than say a BMW. Another student has to come out of his modest ways by reading a poem.

It’s a real torture for these students. And we were told this has much in common with our lives.  If only we could “seize the day,” as teacher Keating tells the students. Carpe diem. Thoreau is quoted in the film as wanting to “live deep and suck out all the marrow of life.”

Yes, that’s a good message. But you see the epic fail involved in this film? We were led to believe that this was “normal,” that needing Knox and Neil to be happy was important, that if only Overstreet and Anderson could be inspired then all would be well. But haven’t the Overstreets and and Andersons had enough inspiration.  I mean, isn’t being absurdly wealthy and at an all  male private school set in a bucolic environment, relaxing and not working, enough? Do they need to “seize the day,” when they have already seized the wealth and privilege. I mean shouldn’t it be us that is seizing the means of production from them? What do I care if they can read a poem? How about can they stop Bin Laden. I mean, that’s the day I’d like to have them seize. I really don’t care if they can sneak away to a man-cave and read poems.

But these are high school students. Yes, yes, sure they are.  But they are symbolic of a society and we were led to believe in Dead Poets Society that these people matter and what they think matter and the little foibles of their life matter; much the same way we were supposed to care about Proust, Madame Bovary, Wuthering Heights, Sense and Sensibility, Pride and Prejudice.

The problem with Dead Poets Society is not only its ethnoc centric archaic picture of a bygone America. It is not only that it captures the lives of people who are totally foreign form most of the expected audience. The problem is compounded by the fact that it has the youthful optimism of the end of the Cold War. Theoretically it takes place almost at the height of the nuclear scare in the 1950s. Francis Gary Powers was shot down in 1960, just a year after the film is supposed to take place and the Cuban Missile Crises and Bay of Pigs are just around the corner. If we assume the boys in the film are in their teens then aren’t they some of the kids who will be shipped off to Vietnam soon? Film critic Roger Ebert didn’t like it because he thought it missed the Beat Generation and other themes. But it misses a lot else. And yet it lives on, an Off-Broadway production even reproduced it, with an all-white male cast, as far as I can tell. Can we say “mansplaining.”

Every student wants to be inspired by some teacher back in the day and some have genuine stories of  Mr. P or Mr. T who were inspiring or transformational.  But the older we get we realize that in many cases at the same time as Mr. T was inspiring, some other faculty members or football coaches were raping students. We realize the lies we were taught in school. The assumptions and nonsense. The bullying, the abuse.

Whatever the truth of ones own educational experience, whether it was being a football star, or being an outsider, Dead Poets Society simply doesn’t ring true. And yet we were made to think it does ring true.