In the last two months almost 100 Jewish community centers and day schools have been targeted with anti-semitic threats. The map of the threats is shocking. It stretches from Maine to Florida, Texas, Colorado, all the way to California and Washington. Despite more than 190 anti-semitic incidents, no arrests have been made. These are terrifying times for many, and there is a feeling that anti-semitism is reaching a crescendo in the US.  The perception is that America has historically been safe and tolerant, but today a rising “wave” of anti-semitism may be breaking on its golden door.

The US administration’s response has been tepid at best, denial at worst. Although Vice-President Mike Pence stopped by a desecrated cemetery in St. Louis, it took more than a month for US President Donald Trump to make his denunciations clear, despite numerous chances to do. Trump is personally blamed for “unleashing” anti-semitism during the election campaign last year. Rabbi Daniel Bogard, a victim of online anti-semitic abuse, told the JTA “there has been permission that’s been given to say these things we didn’t used to say.”

This feeds a growing narrative about the rise in anti-semitism. There are more than 9 million results in google relating to “Trump anti-semitism,” including the recent headlines “Report: Trump mulling axing anti-semitism envoy as part of budget plan” and “Trump suggests Jewish community is spreading anti-semitic threats.”

However Mark Oppenheimer at The Washington Post notes “there is no good statistical evidence (yet, anyway) that Americans have grown more anti-Semitic in recent months…Overall, however, we won’t know for many more months, when the FBI and the Anti-Defamation League have better data to work with, if Nov. 9, 2016, was the start of something new or just a continuation of a regrettable but enduring legacy.” The Anti-Defamation League has released a list of the ten worst anti-semitic incidents of 2016, but the data for 2016 is not ready yet. However there is data for the years before 2016.

If there was a major rise in anti-semitism then the 190 incidents that media have reported on in the first two months of 2017 should be significant. That’s 95 a month. Let’s use that as a barometer and look at the first seven years of Barack Obama’s presidency.  The 2016 data, when it is released, will be influenced by the apparent rise in anti-semitism during the election.  But the years 2009-2015, which we have data for, are untainted by the alleged rise in attacks from Trump supporters. 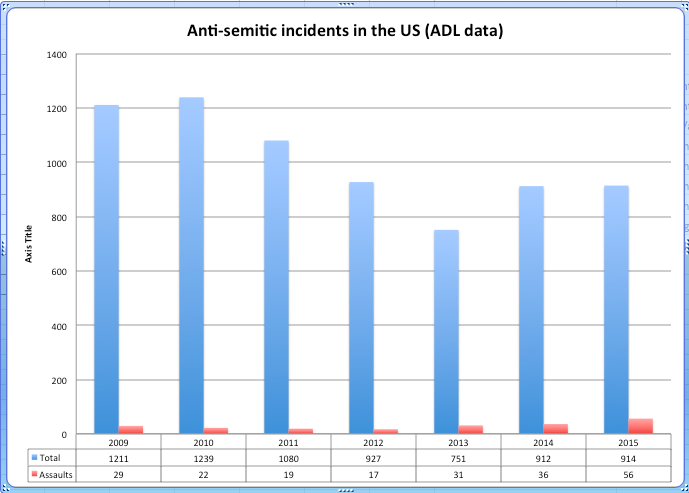 There were 1,211 anti-semitic incidents in Obama’s first year in office. This was after four strait years of declining anti-semitism. For instance in 2008 there had been 1,352 incidents. Attacks had peaked in 2004 with 1,821 incidents.

Over the years the number of incidents continued to decline. After an initial uptick to 1,239 in 2010 they declined to 751 in 2013. They began to rise again to 914 in 2015, the last year we have data for. When we add the total number of incidents between 2009 and 2015 the overall number of attacks reaches more than 7,000. However the number of assaults increased, almost doubling during the Obama administration.

Overall, there were an average of 84 incidents a month under the Obama administration. Let’s step back for a moment and compare that to the 95 incidents between January and February 2017. That’s a 10% increase. It could be more once all the data comes in. But media hasn’t been telling us there is a slight increase, the narrative has been that there is an anti-semitic wave sweeping the US. In Berlin there was a 16% increase in anti-semitic incidents by comparison. It was also “sweeping” the UK in 2014.

One of the key indicators of rising anti-semitism during the Obama years was the number of physical assaults. From a low of 17 in 2012 they rose to 56 in 2015. The ADL noted there was a “dramatic rise” in assaults that year. So why are headlines today claiming a “pandemic” of anti-semitism in the US. Abe Foxman used the word “pandemic” to describe anti-semitism in the US in 2009. “This is the worst, the most intense, the most global that it’s been in most of our memories. And the effort to get the good people to stand up is not easy,” he said in a speech that year. Jonathan Greenblatt said in November of 2016 that the US was suffering extreme levels of hate. “Anti-Jewish public and political discourse in America is worse than at any point since the 1930s,” the JTA reported.

Looking back almost a decade puts things in perspective. Where was the media in 2009, 2010, 2011, 2012, 2013, 2014, 2015 to highlight thousands of incidents of anti-semitism? 210 physical assaults on Jews. 3,900 threats against Jews and Jewish institutions. 2,900 incidents of vandalism. 180 incidents of anti-semitism on campus. Every 6 days a Jewish person in America was being attacked in 2015 and it went largely ignored. On average there were threats every day against Jews and Jewish institutions over the last eight years and most of them did not receive headlines. There were also incidents of vandalism on everyday on average.  Why did 7,034 incidents of anti-semitism not get major headlines for so long? Was it because of an agenda to protect the Obama administration from criticism, or due to complacency and people becoming inured to daily anti-semitism? The cesspool and swamp from which today’s hate crimes on Jewish cemeteries emerge is not a vacuum and it may not be due to the toxic divisions of 2016, it may have deeper roots. That’s the elephant in the room. 7,000 incidents that were recorded, that have been reported by the ADL, the data that does exist, that almost no one wants to talk about.

The anti-semitism we don’t hear about

Is the media misleading us through fear-mongering about anti-semitism in the United States? The data seems to show that the recent wave of threats, while unique in their target and regularity, are not a massive increase from years past. Threats occurred throughout the last decades, and many of them went unreported. The key indicator of physical assaults has been rising in the last years. Campus anti-semitism, the ADL says, peaked in 2015. The most important thing is to present the public with real data on the number of incidents. The 24-hour news cycle tends to encourage the feeling that anti-semitism is leaving people under siege, with swastikas on subways and memorials, at rural synagogues and on homes. There is also a tendency in the last year to feed a narrative that believes there is a major rise in hate-crimes in the United States connected with the toxic election and which should be blamed on Trump. There may be a rise in hate crimes, but many of them are not directed at Jews, many of them are directed at Muslims and other groups, such as the Georgia couple recently sentenced for threatening African-Americans.

The reality is that media even ignores serious anti-semitism in other countries while reporting on US anti-semitism. Video recently emerged of a preacher at the Al Andalous Islamic Centre named Sheikh Wael Al-Ghitawi shown in video claiming Jews were “people who slayed the prophets, shed their blood and cursed the Lord.” Another sermon in Toronto referred to the “filth of the Jews.” When preachers can spread hate speech openly and without any protest from those listening, that is a major problem. Are there videos in America of anyone preaching such hatred openly without a pushback? Similarly a teen was charged in November 2016 in Ottawa after six incidents of anti-semitic vandalism. The charges were relatively light, including “uttering threats and mischief to religious buildings.”

This raises serious questions about how we discuss and learn from anti-semitism. When people sit through a sermon and don’t raise a hand in protest when a preacher says Jews should be killed, that’s a huge problem. Those who sit silently and their families who are influenced by them basically accept anti-semitism. What about when there is clear anti-semitism and then the perpetrators are not charged with hate crimes. In Avignon a man tried to light fight firecrackers in front of a synagogue, but was clear of any anti-semitic charges. He just happened to do it in front of a synagogue, not any of the dozens of churches in the town? There are many incidents where youth are arrested for anti-semitism and then released when local authorities say they are just kids “being kids,” or just making “mischief.” In Germany a court ruled that an attempt to burn down a synagogue was not anti-semitic or a hate crime, but rather an attempt to protest Israel. According to The Jerusalem Post “a German regional court in the city of Wuppertal affirmed a lower court decision last Friday stating that a violent attempt to burn the city’s Bergische Synagogue by three men in 2014 was a justified expression of criticism of Israel’s policies.”

Where is the outcry when a court decides it is “justified” to burn down synagogues. Isn’t burning down a synagogue more serious than phone threats? What is the lesson learned among the public when attacks on synagogues are excused or go unpunished, or when preachers openly preach hate and there is silence? Are we only offended by certain types of anti-semitism and not others?

We need to ask, where was the discussion of the “wave” of anti-semitism when there were 7,000 incidents, when imams preached hate, when people tried to burn down a synagogue. These are all connected and complacency in the face of hatred allows it to grow. Pressure should be put on law enforcement to find those terrorizing JCCs across America. At the same time we must be keen to call out other acts of hate, including anti-semitism, teach lessons from it and also look at long term trends, such as why have anti-semitic assaults almost doubled while threats, statistically, decreased greatly (almost 50% less) between 2008 and 2015.