Sweden’s foreign minister Margot Wallström welcomed the latest UNESCO resolution condemning Israel’s actions in Jerusalem and describing Israel as occupying Jerusalem. More than that, Sweden was a driver behind the UNESCO resolution, and tried to encourage other EU states to support it and condemn Israel. In a statement released by the government Sweden noted: “In the negotiations, Sweden has consistently strived for EU unity on this resolution, and was ready to make concessions to uphold that unity,” the statement continued. “However, since the EU unfortunately has not been able to stay united, and since Sweden believes the current text is acceptable, Sweden has voted in favour.” It was the only EU state to vote in favor. 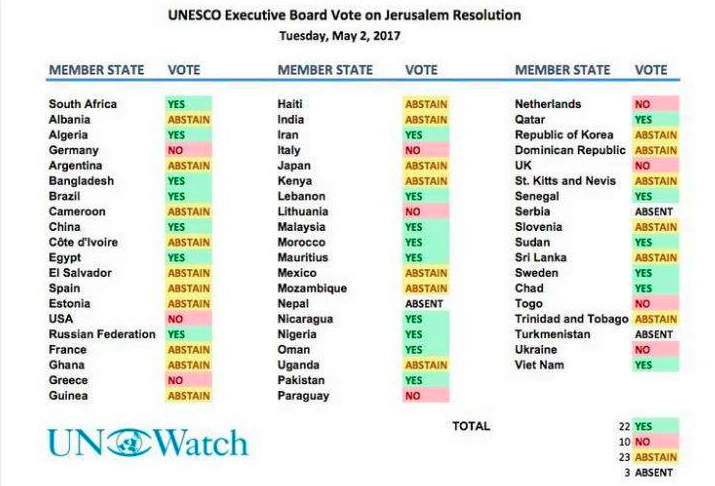 Sweden, the only European country to vote for the UNESCO resolution. (UNWatch)

The resolution on Jerusalem is just the tip of the iceberg of the current Swedish government’s obsession with Israel. How did a Scandinavian country with a population of 9 million and its own social problems, so far from the Middle East, become so obsessed with Israel?  Margot Wallström is merely the latest incarnation of a tendency in Sweden to focus on Israel and want to be involved in deciding Israel’s fate. A Social Democrat, she became foreign minister in 2014 and Sweden recognized the state of Palestine soon after. At the time she said that the move to recognize Palestine was a symbolic expression of Swedish commitment to peace, a “positive injection into the dynamics of the Middle East peace process.” In 2016 she visited the West Bank and tweeted: “Returning from Palestine. Action is needed to save the two state solution. Settlements and demolitions thwart conditions and hope for peace.”

But Wallström’s pathological Israel obsession is revealed in other comments she has made. In December 2015 she claimed Israel was carrying out “extrajudicial killings” of Palestinians. She has claimed that Israel “irritates us” by not following Sweden’s demands.

In November 2015, after terror attacks in Paris, she found a way to blame Israel.  “Obviously, we have reason to be worried, not just in Sweden but across the world, because there are so many that are being radicalized. Here, once again, we are brought back to situations like the one in the Middle East, where not least, the Palestinians see that there isn’t a future. We must either accept a desperate situation or resort to violence.”

For Wallström things often seem to come back to Israel and Jews. In February a Swedish trade delegation led by Trade Minister Anne Linde went to Iran and instructed the delegation, that happened to be mostly women, to wear hijabs to cover their hair so as not to offend the Iranians, and to wear large jackets to cover their bodies. When the delegation’s decision to cover up was critiqued,Wallström defended the decision. “There is a diplomatic matter of course. He [the critic] knows very well. And I think I’ve seen him in a kippah. If he says he has stopped following the rules in Iran, I hope he really have not stopped respecting how to behave and dress in a synagogue. ” In her comparison she compared a country that forces women to wear a hijab and cover their hair, a country that punishes women singing, that forbids women from sports tournaments, with a politician showing respect by visiting a Jewish house of worship. In a sense she compared Judaism as a religion with the Iranian regime. Jews of course have a choice when and where they want to wear a kippah, or headcovering, women in Iran do not. But for Wallström it was the same. And why did she single out Jews, a tiny minority, when discussing Iran? For the same reason she singles out Israel at UNESCO, and in statements and the same reason that instead of condemning the bigotry and intolerance that lead to ISIS attacks in Paris, she blames Israel.

She wants to “save” the two-state solution.

The Swedish government’s obsession with Israel is how the new anti-semitism works. In the period prior to the creation of Israel Jews were the “other” in Europe. They were blamed for blood libels, and often attacked in the press, stereotypes as wandering salesmen, as rootless people, as greedy bankers or “white slavers.” Whatever was negative was said to be a Jewish quality. If it was to have money, then Jews had too much money, if it was not to work the land, then Jews were urban, if it was to be poor, then Jews were said to be dirty. If Europeans were modest and honorable, Jews were “lecherous.” If rural people were considered decent, then anti-semites claimed Jews were “cosmopolitan.” Jews could not even live in Sweden until the late 1700s.  Jews could not intermarry and lacked civil rights until the mid-19th century. Even though there were only around 7,000 Jews in the country in the 1930s Sweden passed a law against Jewish ritual slaughter and there were demonstrations against Jewish immigration. Nevertheless during the Holocaust around 8,000 Danish Jews and 900 Norwegian Jews were able to seek shelter in Sweden. But anti-semitism lives on and grows in Sweden. One study by Martin Ericsson at the University of Lund noted: “From the left, Jews were occasionally blamed for being capitalists and, in certain parts of the revolutionary left, anti-Semitic preconceptions have flavored political criticism of the state of Israel’s behavior in the Palestine conflict…From the right, Jews have instead been accused of being behind both communism and the labor movement in general.” In the 2000s attacks on Jews in Malmo became common and it became unsafe to wear a kippah. Cartoons in Swedish newspapers have attacked Jews. One used anti-semitic stereotypes to criticize Trump and Netanyahu.

This is the backdrop to the current Swedish government’s relations with Israel. It has transferred traditional anti-semitism that blames Jews for ills in society, to blaming Israel for ills in the international community. This is why Israel is singled out at the UN for not only disproportionate condemnation but often the only country condemned. The World Health Organization condemns Israel, the International Labor Organization, and the UN organizations and committees dealing with women single out Israel, while ignoring Saudi Arabia, Iran and other countries. The constant obsession with Israel, often supported by governments of countries like Sweden, is not because Israel is a worse violator of human rights than many other countries, but solely because most Islamic countries at the UN work as a block, like an old boys club, guarding eachother from opprobrium, the same is true of African states and EU states. For all these blocks, Israel is always the one that doesn’t fit, the “Jew” among the nations. Just as in the old days in Sweden the presence of just a few Jews was too many and they were restricted from occupations, or immigration or where they could live, and how they could slaughter their meat, so in 2017 Israel is restricted and blamed. Blamed for terror in Paris, told it cannot have rights to Jerusalem, just as Jews once lacked civil rights in Europe, now Israel lacks international rights to its own capital city, simply because in 1947 the mostly European UN decided that Jerusalem should be an “international city.”

The singling out and obsession with Israel in Europe and in the international community at large is the new anti-semitism. Hatred of Jews and the need for an “other” has been transferred from the local to the international. Jews were once restricted to ghettos in Europe, but today Israel is told to remain in a kind of ghetto in the international community. Singled out for its treatment of women or labor rights when its treatment of women and labor and workers rights is far better than many countries in the world that are never subjected to criticism. Instead of being at the forefront of confronting international anti-semitism by demanding that Israel only be criticized about “women’s rights” if Saudi Arabia, Iran and numerous other countries are similarly criticized, Sweden’s government and other EU states too often go along with the pack, with the mob.

Countries are slowly realizing that they have engaged in international anti-semitism against Israel and some EU states are refusing the charade. The UK has vowed to oppose the UNHCR and other organizations after the continually adopt only anti-Israel resolutions but no resolutions against other states. 100 US Senators have demanded the UN stop its Israel obsession.

But anti-semitism is not easily stopped. A new survey in Germany showed that many agreed with the statement: “Based on Israel’s policies, I can understand people having something against the Jews.” No other country’s people are blamed and hated for the country’s policies. No one hates Catholics because of what Ireland does. No one hates Persians because of Iran. No one of course can hate Arabs for the crimes of Al Qaeda. But Jews, when it comes to Jews, large numbers of Europeans and others say that hatred of Jews is acceptable because of Israel. The new anti-semitism focuses on Israel and hates Israel in a way no other country is hated. Israel’s policies aren’t worse than Burma’s. But you’ll never see someone hate a Burmese restaurant because of the Burmese junta, or hate a Buddhist for what happens with the Rohingya. Of course not. But Israel and Jews, then the hatred becomes more acceptable. And it transfers to international hatred at places like the UN and obsession with Israel. Swedish EU parliamentarian Marita Ulvskog has held up photos of jailed terrorist Marwan Barghouti.

There is no conceivable reason a state like Sweden should ever involve itself in what happens in the Middle East. First and foremost it should deal with its own problems and then its neighbors and then Russia and the EU. There is plenty to deal with there. So why is its nose stuck in Jerusalem? Why not go deal with Tibet or Venezuela? Why is this neo-colonialism from Sweden’s government so strong, the idea that it must “solve” the Middle East, must “save” the peace process. Obsession with Israel. It doesn’t notice the 12 million people displaced in fighting in Syria, the 500,000 dead. It doesn’t notice the Yazidi genocide, and the mass ethnic-cleansing by ISIS. It doesn’t even do a good job policing its own ISIS members. In fact Sweden offers benefits and housing to returning ISIS war criminals. After Belgium and Denmark, Sweden has the most number of ISIS members per capita of any European country. Why did it birth so many ISIS neo-Nazi style genociders? Why is it blaming Israel for ISIS, rather than looking at its own education policies that have birthed intolerance, bigotry, anti-semitism and ISIS genociders?

The fact is that shifting blame to Israel is part of the new anti-semitism. European governments find Israel an easy target. They don’t want to look at their own policies, they don’t want to ask why their own countries created thousands of ISIS bigots, or why in Germany for instance there are ten attacks a day on refugees, it’s easier to hate Israel than be self-critical and blame Israel for ISIS than blame homegrown hate speech for it. It’s easier to blame Israel than to offend oil contracts signed in Riyadh or Tehran. The knee-jerk decision always to talk about Israel, obsess over Israel and the “peace process” and needle Israel and find a way to bring Israel and Jews into every conversation is part of the new anti-semitism. Unfortunately Sweden’s government is a prime example of these policies.