I was reading a major US media outlet about Turkey’s president visiting Washington and there was a link to the “free for all” in Syria. “The free-for-all in Syria will make your head spin,” claimed the infographic. It showed a series of circles arranged in a larger circle connected by lines. At the center is ISIS. Arranged around it are PKK, YPG, SDF, Syrian government, Free Syrian Army, Hezbollah, Iran, USA and other states and groups.

There are many other examples of major media trying to explain the complexities of the Syrian Civil War. They can be found here at Al-Jazeera for instance. But Western media tends to make it overly complex. Slate has a weird chart with lots of smiling and frowning faces.

The New York Times seeks to “untangle” it all and give “straitforward answers to basic questions” and Time seems to forego and infographic. The Atlantic has a “confused person’s guide to the Syrian civil war.”

This is 2017, not 2011 when the war broke out. It’s understandable that people far from Syria will be confused when a war breaks out. But after six years where Syria has impacted not only the region, but also the US and Europe and become an important issue of debate in the US presidential election and other elections, people should be familiar with it. Major media have sought to make it more “confusing” than it is. This is a form fo soft racism and a kind of white supremacy that pretends that Syria is a “black hole” and “dark continent” kind of place full of “chaos.” It’s not “like us”, it’s Syria.

In the beginning of the rebellion when it first became armed around 2012 the war was confusing, but for a different reason. At the time it was just Assad against the rebels but the rebels were aligned in multiple groups, some with umbrella Free Syrian Army units and then a multiplicity of little Islamist groups. What was confusing was sorting out numerous “brigades” that were not brigades from “divisions” that were not divisions and figuring out what was what. When I wrote about Syria in 2013 I probably got some details wrong because of the numerous groupings.

But Syria was always more than just a confusing, chaotic black hole. Yet a kind of Orientalist view hangs over writing about it. It isn’t actually that confusing. Assad is fighting a rebellion. The rebellion became increasingly Islamist. The rebellion is supported by several foreign Sunni states and the US and the West. Assad is supported by Iran, Hezbollah, and Russia. In 2014 add to this ISIS, which is at war with both sides and then add to that the YPG’s increasing success. The YPG is now allied with the US and has a decent relationship with the Assad regime, and mostly fights ISIS but is loathed by Turkey and to an extent also by the rebels. 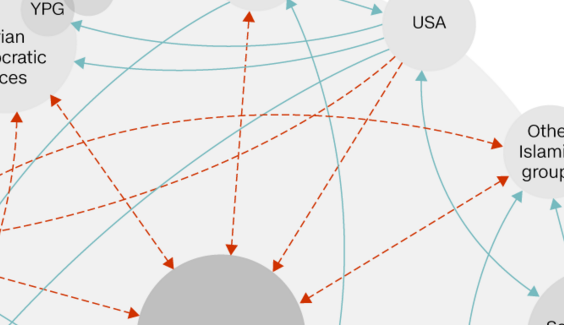 The complex lines of the CNN infographic on Syria

Why is the Syrian war more complex than the Second World War. The Second World War began with Germany under the Nazis attacking one country after another, Austria, Czech, Poland, Denmark, Norway, the Low Countries, France and the UK. They had a non-aggression pact with Soviet Russia (like Assad has with the YPG), but then they attacked Soviet Russia. Soviet Russia had also invaded Poland and the Baltic States. Let’s pause in 1941, so who is fighting who? The Soviet were friends with the Nazis then enemies. The West is at war with the Nazis. Franco is sort of neutral but fascist inclined, so is Switzerland and Sweden. Wait, Finland is on the side of the Nazis and so is Fascist Italy.  Now wait, the Nazis and Italy are also at war with Yugoslavia and then Greece. Italy also attacked Ethiopia in the 1930s and Albania. Right? So you’ve got it all strait. Wait, what about Hungary, Rumania, Bulgaria? Most of them will join the Nazis in the war in the Soviet Union. They joined the Tripartite pact, but not all at once. Bulgaria wanted to be neutral initially.

At the same time as all this was happening in 1940-1941 in Europe, Japan was on the march in Asia. It had attacked China in the 1930s. In 1941 it would bomb the United States in December 1941 and then sweep over British and Dutch colonies. They had already attacked French Indochina in 1940. Japan had fought a brief war with the Soviets in 1939, remember Nomonhan where Zhukov earned his spurs?  So when the Nazis invaded the USSR in June 1941, the Japanese didn’t join the war effort and the Soviets waited until 1945 to attack Japan.

Everything simple so far? But wait, what about the Yugoslav partisans, the Polish home army, Vichy, Mers-El-Kebir, the Anglo-Iraqi war of 1941, Stepan Bandera, the Anglo-Soviet invasion of Iran, the Italian Armistice of Cassibile in 1943, the Chetniks, Tito’s partisans? No confusion there? No confusion as to why the British bombed the French fleet? Why didn’t the Russians enter Warsaw when it was in the middle of rebellion against the Nazis? Why did the Nazis execute 5,000 Italians from the Acqui division, their ally?

If you’re not confused about World War Two it is because you have been told it’s a clear war of “the allies” against the “Nazis.” Because it’s a western war and so it is quite simple really. But when you wade into the history, is it simple? Is the history of Hungary of Slovakia simple. Remember the Slovak uprising in 1944? They don’t teach that in the history books. 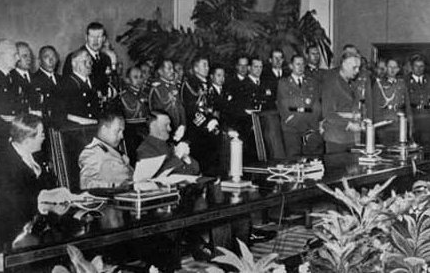 Signing the Tripartite Pact in 1940

When we learn about the Second World War they don’t give us a confusing infographic with lines going everywhere or happy and sad faces. But why not? Some countries changed sides. The USSR, the “ally” invaded Poland and massacred 22,000 Poles at Katyn. Shhh, that’s confusing. The USSR was attacked by the Nazis, not an aggressor carrying out massacres. Bandera was a “collaborator” with the Nazis, but why was he sent to a concentration camp then? Things aren’t so simple. They aren’t simple in Syria either, but why make them “chaotic” and “confusing.” Wasn’t Eastern Europe chaotic in the Second World War? Changing regimes, coups, alliances, nationalist partisans and communists. And who is on whose side? FDR opposed colonialism and told Churchill that, but the British were busy in Iraq and Persia. And what’s happening in India and in Burma and Vietnam? The Nationalist Chinese and Mao?  Confusing. We need an infographic.

Maybe it is time for western media to talk about Syria the way it talks about the Second World War. Some commentators have compared Syria to a world war, or the Thirty Years war. So if you can make sense of those wars, you can make sense of Syria. It’s true some actors, such as the YPG don’t always make it easy with their multiplicity of different acronyms such as PYD and YBS. It’s true the Syrian rebels have numerous groupings. But the allies had numerous allied groups. The Nazis recruited non-German volunteer units from dozens of countries. But no one asks you to memorize the Legion Flandern, Danish Free Corps, Bretonische Waffenverband, Spanische-Freiwilligen-Kompanie or numerous others. So you don’t to know the difference between Sultan Murad, Sham Legion, Nour al-Din al-Zenki and others. Experts know, but not everyone needs to. The existence of these groups doesn’t make the war impossible to understand. It means the media presents it as a “Middle East chaos” because that’s easier than expecting readers to be adults.

It’s true that the method of western war in WWII appears more methodological and less chaotic than Sunni Jihadist groups. But are Sunni Jihadist groups more complicated than all the little changing alliances in the Wars of the Roses? But you get the basic ideas, the House of Lancaster against the House of York. Ahrar al-Sham and Nusra. How can you dare compare noble nights of yore to jihadists? It’s probably comparable.

So don’t sell us this “free for all” and “makes your head spin” nonsense.