Saudi Arabia signed a $109 billion dollar defense deal with the US over the weekend. It is part of a larger deal worth $350 billion over ten years (it may be worth up to $380 billion). That’s a lot of money, so what is the Saudi shopping list?

For a state Saudi Arabia is one of the leading defense spenders in the world, ranked around 3rd, with between $60-80 billion in annual spending, making up 10% of their GDP.  For 2017 it is forecasted at $56 billion. That’s more than the total GDP of 100 countries in the world. According to the New York Times, “The two sides discussed a shopping list that included planes, ships and precision-guided bombs. Then an American official raised the idea of the Saudis’ buying a sophisticated radar system designed to shoot down ballistic missiles…Lockheed is the sole manufacturer of the antimissile system, known as Terminal High Altitude Area Defense, or Thaad.” The F-35 and its price was also on the list.

So what can Saudi Arabia buy?

THAAD systems with multiple missiles and logistics can cost up to $1 billion. “A full Terminal High Altitude Area Defense battery made by Lockheed Martin Corp. would cost about $800 million, according to Aerospace & Defense intelligence Report. A THAAD battery consists of at least six launcher vehicles, each equipped with eight missiles, with two mobile tactical operations centers and the AN/TPY-2 ground-based radar, ” one report notes. “$151 million to buy the 12 missiles.” The price of an F-35, according to the NYT “could reduce the average price for each F-35 by 2020 to $85 million, about the same as less sophisticated fighters cost.” A recent order was “$8.5 billion for 90 F-35 jets.”

So Saudi could buy 350 integrated Thaad units. But you don’t need 350 Thaads. Several of the systems is enough with re-supply of missiles. So Saudi might buy ten of them. That would be up to $10 billion. 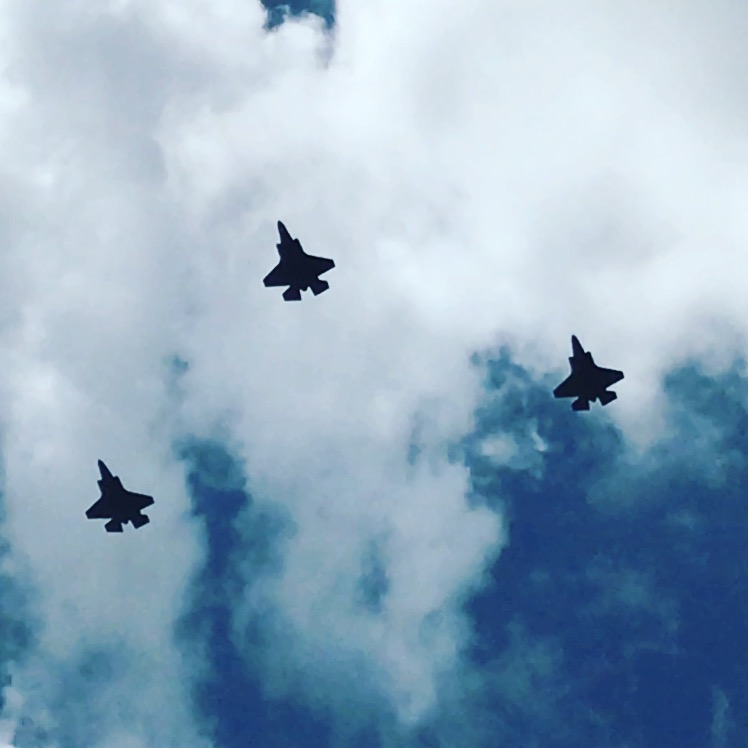 F-35s flying over Jerusalem, will the Saudi deal change the balance of power in the region? (Seth J. Frantzman)

How many F-35s does Saudi need? Saudi ordered 84 F-15SAs recently and has received some of them. Reports think the Saudis want 100 F-35s. That would be up to $10 billion.

Saudi Arabia is upgrading its navy as well. It has been targeted off of Yemen and wants to be able to police the Persian Gulf, Red Sea and Indian Ocean and challenge Iran’s navy. According to one report, “the Pentagon and their Saudi counterparts would finalize a $6 billion deal with Lockheed Martin for four modified versions of the company’s Freedom-variant Littoral Combat Ship – six percent of the total U.S. arms package.”  This totals “$750 million and $1 billion per ship.” Lots of high tech and expensive equipment is mounted on these ships, such as SPY-1D radar and the COMBATSS-21 as part of its SNEP II plan, upgrading its navy. Maybe it also wants 30 Mark V patrol boats at a cost of $1.2 billion? So at most the naval spending is another $10 billion. Saudi won’t be buying submarines from the US though, so far.

Helicopters? 10 MH-60R helicopters cost $1.9 billion. Saudi also wants to upgrade its Apache fleet, even though it recently signed a $3.3 billion deal to do this. Recent costs of a fleet of these can be around $600 million for 35 of them. So even if you wanted 100 Apaches it would be only a few billion price tag. The Saudis also want 50 CH-47 helicopters and 60 UH-60 transports. The Ch-47 can cost up to $25 million each. So thats more than $1 billion.

Tanks? The Saudis have been upgrading their M1A2S Abrams tanks,  and M1A1s costing several billion dollars. America’s newest generation of these tanks have numerous upgrades and are more lethal and faster. These can cost around $8.5 million a piece. Even if you buy 100 of them, it’s still only $1 billion.

There are other expensive weapons systems America might want to sell? Some Ospreys?

Whatever Saudi Arabia buys it will dramatically increase the kingdom’s military strength. Saudi doesn’t make the top 20 in recent surveys, whereas Israel was number 14. Saudi was 24th in a Business Insider list of 2017. Israel has been ranked 11th ranked 11th in one place and 10th in another. Saudi was listed as 28th in one 2016 list. Iran was 23rd. Now its military strength stands to increase dramatically in the region. For instance Israel’s defense spending palls in comparison to this deal. Israel inked a $38 billion dollar deal with the US for 10 years last year (involving an aid package), but overall it means Saudi may move up a dozen notches, closer to Israel’s military power, in the next decades.

One response to “What can Saudis buy for $350 billion?”