In the last week of June 2017 rumors began to spread of increased tensions on the Turkish border with Kurdish-run areas in Afrin. A small province, about the size of Luxembourg, since 2012 when Bashar al-Assad’s forces withdrew, it has been in the hands of the Kurdish People’s Protection Units (YPG). On June 28 Yunus Paksoy at Daily Sabah reported that there was a Turkish military build-up prepared to target YPG in Afrin and Tal Rifat.

This week’s tensions are not the first between Turkey and Kurds in what is called the “Afrin canton.” Over the years there has been shelling by Turkey of the Kurdish area (which Turkey claims is in response to Kurdish actions usually) and the Kurds there have a tense relationship with Syrian rebel groups and Jihadists who man positions around the canton. For the most part though, the area is relatively peaceful. But last week many Kurds began to report that a conflict was brewing. Rudaw reported that it might be imminent. “Turkey will be plunged into a swamp, politically and militarily – there will be an historical resistance against Turkish occupation in Afrin and Shahba regions,” Mehmud Berxwedan, commander of Kurdish YPG forces in Afrin, told Voice of America’s Kurdish radio service on Friday. Kurdistan 24 reported Turkish shelling of Afrin. 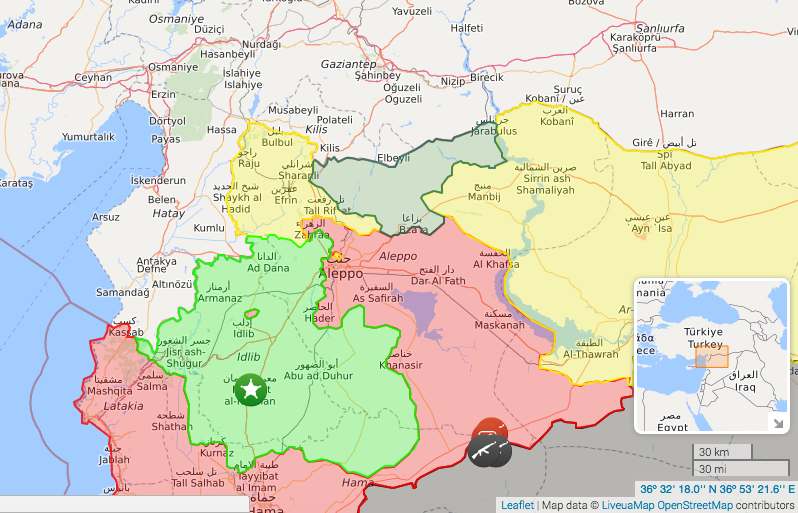 Map of the area from ISIS Live Map shows complex situation On July 1, 2017, Afrin is in yellow

The new tensions come a bit less than a year after Turkey launched its operations in Jarablus that eventually carved out a Turkish sphere of influence in northern Syria between Jarablus and Kilis. Operation Euphrates Shield had two goals, one was to frustrate plans by the YPG to continue its advance past Manbij and move toward al-Bab and Jarablus. That would prevent the SDF (Syrian Democratic Forces) and its YPG partners from linking up Afrin canton with the other Kurdish liberated areas near Manbij Rojava and Kobane. The Turkish goal was also to clear ISIS from the border and shore up Syrian rebel groups, a dozen of which participated in the operations. By March 2017 Turkey declared an end to the operation, its forces having come up against those of the Syrian regime and the US-backed SDF in Manbij. During that time the US sent Rangers to Manbij to fly the US flag and warn Turkey from attacking the SDF. Russia also sent soldiers into Afrin in March to send a signal from Turkey not to attack the area.

In this way the conflict in Syria that had gone on from 2012 to 2016 reached a major new phase in 2016 with the big powers, Turkey, Russia and the US, coming face to face. I covered this issue in early 2017. To understand the Turkish view of Afrin one must go back to January 2016 when Reuters claimed “The powerful Syrian Kurdish YPG militia and its local allies have drawn up plans for a major attack to seize the final stretch of the Syrian-Turkish border held by Islamic State fighters, a YPG source familiar with the plan said on Thursday.” This laid the groundwork for Euphrates Shield. But other things were on Turkey’s mind, such as the erosion of rebel control of Aleppo and the dispute with Russia after the downing of the Russian SU-24 in November 2015.

Now it is June 2017 and the strategic picture has changed. The Syrian regime is making very slow but steady advances against the rebels. Russia and Turkey have patched things up, made even more clear by a phone call between Erdogan and Putin on Friday the 30th of June. The US has sent a message to Turkey not to attack Kurds in Northeast Syria, as the SDF encircles Raqqa. This leaves Turkey with few policy options, even as it is drawn into conflicts in Qatar. However Iran’s ambassador to Turkey said on June 17 that Iran sees the YPG as terrorists.

Kurds in Afrin are warning of a Turkish intervention or the use of Syrian rebel groups against them. There are limited clashes reported with Ahrar al-Sham on the borders with Afrin. June 15 clashes resulted in 41 killed according to one report. Kurdish sources started a hashtag and social media campaign #TurkeyhandsoffAfrin to encourage awareness. PYD leaders have also tweeted about the threat claims and threatened the battle would be a “swamp” or quagmire for an invading force.

To counter these defensive claims, another counter-narrative was quietly pushed to Reuters and news outlets claiming the YPG was planning to attack the corridor between Azaz and Jarablus, the area that Turkey had helped shore up after Euphrates Shield. “Commander Sipan Hemo did not give a timeline or details of plans to take the area, which was seized by the Turkey-backed rebels last autumn from Islamic State, but said he regarded Turkey as an occupying force there,” Reuters reported.  Another Reuters report notes: “The SDF is an alliance of Kurdish and Arab groups spearheaded by the YPG militia which Turkey views as an extension of the Kurdistan Workers Party (PKK), which has waged a three-decade insurgency in Turkey. The Turkish military said on Wednesday it had fired artillery at YPG positions south of the town of Azaz in what it said was a response to the YPG’s targeting of Turkey-backed rebels. Mansour said the SDF had responded to Turkish shelling.”

The Middle East Eye is also pushing the narrative that it is the YPG threatening Syrian rebels and Turkey. “Kurdish YPG plan to take Azaz-Jarablus area in Syria. Sputnik, which represents the views of Moscow generally also ran a story based on the same information as Reuters, about Syrian Kurds threatening to “liberate northern part of Syria from ‘Turkish invasion.'”

So what is really happening? Will Turkey risk a major operation on the border of Afrin or towards the city itself? Photos showing an arms build up allegedly around the area keep appearing on social media. The issue Turkey faces is that it doesn’t want to conquer Afrin, but it wants the SDF/YPG to be reined in. It can’t rein them in at Manbij or other areas, so Afrin is a convenient target. The Syrian rebels however are facing the regime on the other side of their area in Idlib and don’t want a long tough conflict with the Kurds as well. It is in all sides interests not to have a brutal conflict. Towards that end the major powers, the US and Russia, both have an interest in Afrin not becoming a flashpoint. Russia has its agenda with Damascus and the US is working on destroying ISIS in Raqqa.

The problem Turkey faces is figuring out what its long-term goal in Syria is. It secured the border, and has prevented a new surge of refugees from fleeing. In face some refugees have gone back to Syria. The Afrin canton has been a relatively quiet part of Syria for years. Consider the fact that the SDF offensive around Manbij conquered an area almost the size of Afrin in 2016. Afrin itself has not seen many major changes in the area the Kurds control vis-a-vis the other groups. However Turkey-US relations has weakened in recent years and media reports are paving the way for a new conflict, as if it is a fait accompli; “Turkey and Russia may cooperate in Afrin after YPG driven out,” reads one Turkish media report.

One can only hope that the war of words between Afrin and Turkey over last week was all words and less of the reality of new conflict taking place.