A lot of people have read Jared Yates Sexton’s tweets about getting death threats after he outed a Reddit user who made a gif about Trump and CNN. Other journalists have written about his tribulations. He says that articles attacking him “are showing up on Neo-Nazi websites, there are videos spliced with Goebbels…footage from Natural Born Killers of journalist being executed by shotgun.” Other writers are linking to his feed to show “an insight into what its like being a journalist in 2017 and why Trump’s rhetoric is incredibly dangerous.”

CNN has written about how they tracked down the guy who made the gif about Trump. CNN says that is “is not publishing “HanA**holeSolo’s” name because he is a private citizen who has issued an extensive statement of apology, showed his remorse by saying he has taken down all his offending posts.”  The Reddit user’s apology notes ” I have the highest respect for the journalist community and they put their lives on the line every day with the jobs that they do in reporting the news.”

Let’s pause for a second and digest this turn of events. A man who no one had heard of before recent weeks made a short video that he put online on a site. The US President tweeted a refashioned form of that video. A writer tracked the man down and CNN reported about it. The man was threatened with being outed, he apologized and CNN decided not to reveal his identity. The writer received threats on social media. And through all this we are supposed to listen to “what it’s like” to be a journalist in 2017 in America.

What is it like? Is it like Mexico? In Mexico journalists are often murdered. “One was killed while resting in a hammock at a carwash. A second was dragged from his car and shot dead near the newspaper he had co-founded. When another was killed in front of her son, the criminals left a note.” According to one rights group “since 2000, at least 106 journalists have been killed across Mexico.” BBC is even wondering if Mexico is even capable of protecting them. Mexican newspaper El Norte closed because of threats and killings. In 2015 Reports Without Borders says that 67 journalists were killed while working. In Iraq and Syria 21 journalists were killed covering the conflicts there. In France 8 were murdered in a terrorist attack at Charlie Hebdo. America was not in the top ten places journalists are killed, but Honduras, Philippines, Mexico, India, Yemen and South Sudan were. The Committee to Protect Journalists says 48 journalists were killed in 2016 with the motive confirmed (29 were killed for unclear reasons). Besides the countries listed in 2015, add Turkey, Afghanistan, Libya and Somalia as places where journalists died. War, politics and corruption were listed as the top reason journalists were killed. According to CPJ, only one journalist was killed in America, with the motive unknown. 2015 was a worse year in the USA, with two journalists murdered.

Is 2017 a dangerous year for American journalists? None have been killed, while 34 of their colleagues abroad have already met their ends. In Mexico and Iraq four have been killed, and in Yemen, Syria and Russia 2 have died. PBS did a special last year looking at which countries imprison the most journalists. There were 259 journalists imprisoned worldwide, the highest number in years. Was America the big jailor? No. Turkey, China, Egypt, Eritrea, Ethiopia, Vietnam, Iran, Bahrain and Syria were the top ten.  In Turkey 81 journalists were imprisoned and in China a total of 38. More data can be found at CPJ’s website. There are no journalists imprisoned for their work in the USA. 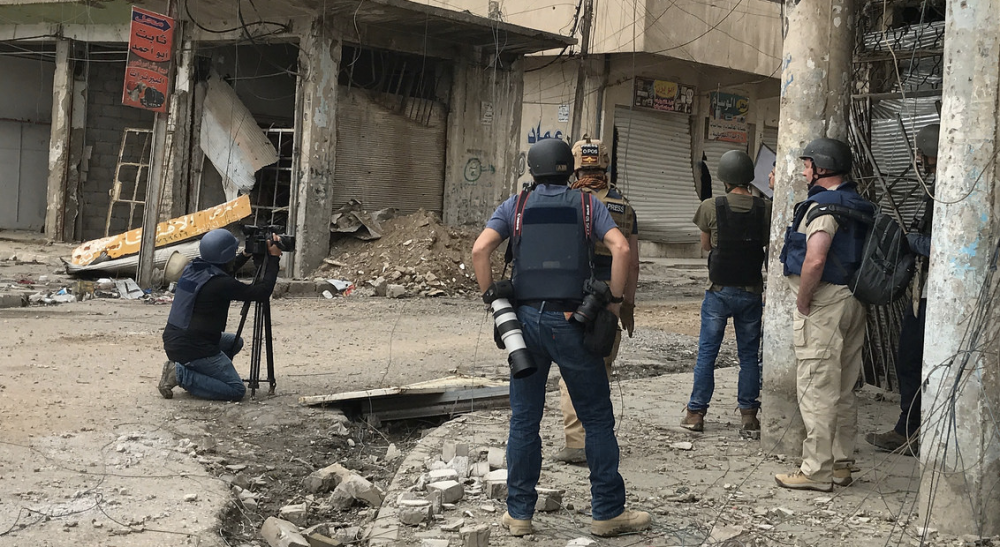 So when Sexton and others tell us “what it’s like” to be a journalist in 2017, maybe there’s just a bit of privilege in their claims of victimhood? American journalists working in the United States are some of the most privileged and safest journalists in the world, second only to journalists working in the European Union. When people talk about journalists “putting their lives on the line,” it isn’t happening in Berlin or Boston, it’s happening in Mosul, Raqqa and other places. Unfortunately since journalists like to report about other journalists and there is a tendency to focus on the self and want to burnish one’s supposed “dangers” and “threats” they face, it seems like working as a journalist in New York City is almost the same as Baghdad or Mogadishu. It’s easier to have a story about “death threats” on Twitter against people with summer houses who actually face no threats, than it is write about journalists in Ciudad Juarez where threats by drug gangs actually result in people being murdered. The threat of imprisonment in some countries is real, the threat of government agents or spies following and abducting journalists is real as are the threats by terrorists, compared to the slander and incitement on social media in the West which isn’t pleasant but doesn’t actually result in prison or murder.

Of course there may come a day when the massive amount of hatred on social media and the uncivil behavior in recent politics in America may lead to real violence. The “Pizzagate” conspiracy in the US during the election last year did result in a shooting. Threats should be taken seriously and police should investigate and companies should protect their journalists.  But to pretend that the most privileged and most wealthy journalists in the world, and most safe journalists in the world, are “telling it like it is” in 2017 ignores the reality and discounts the work of journalists in other countries and conflict zones.

There is an aspect of class and privilege to this because the journalists who die reporting in many of the countries on the lists above are local journalists, fixers and cameramen and other media professionals. Their stories are often not told and some of those who are killed, such as translators or drivers, don’t even make it into the statistics of “journalists” killed because of the fraternity of journalists who consider them not part of the group. For instance. BBC driver was murdered in a terrorist attack in Afghanistan. A translator was killed in Iraq while helping rescue a child, he wasn’t working for journalists at the time, but had known many who came and went from the front. When it comes to fixers and others killed in the line of work with journalists, the numbers are higher than we see above. These are people who work in journalism. Sometimes we only hear about them when other foreign, which means western, journalists die along side them.

The journalist profession in Europe and the US is among the most privileged professions, and yet some people feign suffering as if their struggle is the same as many other professions that are far more dangerous and less glamorous. Journalists have instant access to talk about their suffering, because they are the ones writing or filming the story. The tendency to make it about the journalist becomes more and more over time, with one journalist covering another journalist. Along the way the real victims get lost. Journalists talk about the hardship they face covering refugees than about the refugees. Isn’t the hardship of the refugee far more than the news crew that comes in an SUV and sleeps in a nice hotel? Isn’t the family who risks life crossing the seas and bribes smugglers and lives in the freezing cold far more threatened than the few days that journalists spent in the field with them? And the journalists in America who never even leave America except on vacation and don’t even report about dangerous topics such as drug violence, gang wars or human trafficking, and then claim they face threats are burnishing a victim status that stems from great privilege.

The very fact that a massive news organization with hundreds of employees and hundreds of millions in profit sought out a guy who made a meme and got him to apologize lest his name be revealed, illustrates the real power and privilege.

It’s hard to challenge journalists on their claims of being threatened because they are the ones telling the story, often to other journalists who want to also feel “threatened” because it makes a good story. But they should keep things in perspective. Western journalism is notoriously lacking in diversity and is dominated mostly by people from privileged backgrounds who work in a safe and enjoyable profession which is a privilege to work in. Compared to their counterparts in the global south they face few if any obstacles in their work. Compared in general to their counterparts in their own countries who work worse jobs with less perks, they are more privileged. To not acknowledge that does a disservice to the public.

One response to “Journalism, privilege, and victim narratives”