“It is to be stressed that the nearest watch post is 13 kilometers far from the zone of separation between Israel and Syria near the Golan Heights. The zone has been approved in accordance with the international agreements,” said Operational Directorate of the Russian General Staff Col. Gen. Sergei Rudskoy on Monday. This was part of the recent ceasefire agreement and Russia had told the US, Jordan and Israel about it’s new post. It is supposed to monitor the “de-escalation” zone.

The full deployment, set up on July 21 and 22, included “two checkpoints and 10 observations posts were established around another de-escalation zone near the country’s southwestern border with Israel and Jordan.” According to Asharq al-Aswat the arrangement removes Hezbollah from the immediate area and specifies that Iran will not be part of the monitoring.  Other details have been posted online.

So the “Russians are coming.” Let’s take a look back at how this came about. Back on July 18 Prime Minister Benjamin Netanyahu suddenly said he was opposed to the proviso of the ceasefire in Syria. Reports noted that there were concerns that it would allow the regime and therefore Iran to come down to Israel’s Golan border. Russian Foreign Minister Lavrov noted “I can guarantee that the American side, and we, did the best we can to make sure that Israel’s security interests are fully taken into consideration.” 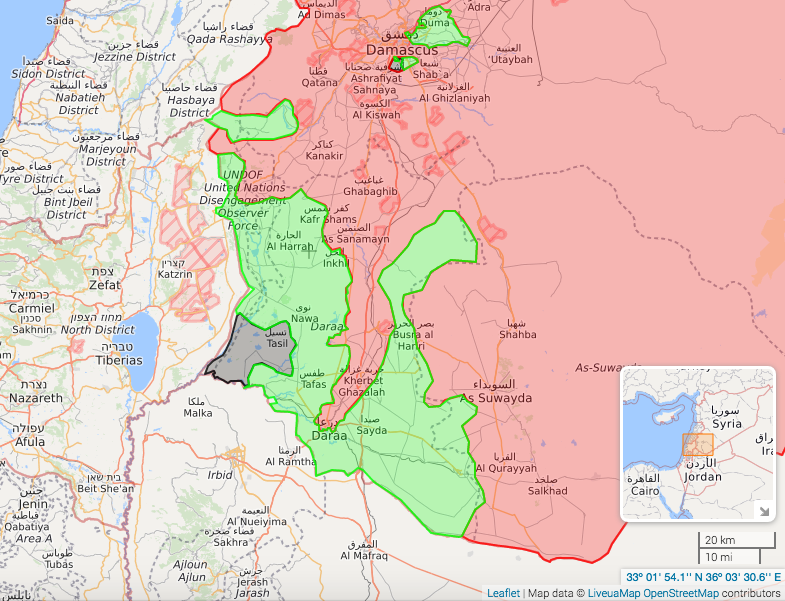 In the past Israel has had cordial relations with Russia about concerns regarding Hezbollah and Iran in Syria and the Golan. Israel has also braced for an endgame on the Golan, realizing that Syrian rebels it has worked with over the years may eventually be defeated. Israel has also repeatedly warned Iran and Hezbollah that it will not tolerate meddling on the Golan, bases or weapons transfers.

Russia, Jordan and the US concluded a Syrian ceasefire agreement on July 7. Israel wasn’t mentioned, but its presence was at the table. Iran and the Syrian regime were not mentioned either, but they were at the table, in spirit, as well. This creates a complex situation in southern Syria. For five years, since serious fighting broke out between the rebels and the regime, Israel has watched the conflict unfold on the Golan. It formed a relationship with Syrian rebel groups on the border, one that, according to sources, involved the provision of minor amounts of humanitarian aid and taking in medical cases.  These groups were a multiplicity of local and larger regional rebel groups, and Israel had to balance these groups against fear of more extreme jihadists from Nusra and ISIS creeping into the border area, which both did. Against this was arrayed a multiplicity of regime supporters, including Hezbollah, Iran, local regime supporters and eventually Russia. Much of the politics along the Golan was local as well, such as when rebels attacked the regime-held Druze village of Khadr, setting off controversy on Israel’s side of the Golan among Golan Druze.

Once Russia intervened in the Syrian civil war and upped its airpower in 2015, Israel’s ability to act as it pleased along the Golan and in the air over Syria became circumscribed. Nevertheless Israel continued to act, allegedly striking Hezbollah-bound arms convoys. But the question that was always asked was what happens when Russia comes down to the Golan? Netanyahu opened a clear channel of communications with Putin on this issue. They spoke in February 2016, in December 2017, in March 2017 (on a visit to Moscow) and most recently in early July 2017.

Since Putin and Trump, with Jordan in the wings, signed on to a a Syrian ceasefire deal along the Golan and southern Syria, many commentators have claimed that Trump has basically given part of Syria to Putin. On July 20 it emerged that the US administration was winding up support for some Syrian rebel groups in a largely failed CIA program that . had gone on for years. A commentator at CNN claimed that the US was giving Syria a “gift.” The cutoff of aid “marks a victory for Assad, Russia, Iran,” said others. Trump “officially hands Syria over to Russia,” claimed Haaretz. The Atlantic had chided Trump for “escalating” in Syria with Tomahawk strikes in April, but now de-escalating was also bad. Thoughts that Trump might try to reverse the gains of the regime in the southeast, near the US training base in Tanf, went unheeded in Washington. The US was unclear what to do with its Pentagon-backed anti-ISIS rebels it had trained there. Yet, a White House official told The Jerusalem Post that the administration shared Israel’s concerns about Iran’s “rush through Syria.”

So, now the Russians are on the Golan, well close to it at any rate. This complicates Israel’s desire to operate openly against arms shipments to Hezbollah and potentially provides a cover for Iran and Hezbollah.

But Russia has assured Israel many times about Israel’s concerns regarding Hezbollah in Syria. In February 2017 Deputy Foreign Minister Syromolotov indicated Hezbollah would leave Syria when the war was over. Lavrov has said he understands Israel’s concerns and Russia’s ambassador to Israel has indicated that it would prevent arms flows to Hezbollah. However Russia has chided Israel (in March 2017) about strikes in Syria, probably to please Assad demands. In December 2016 reports emerged that Hezbollah had even promised Russia it would not attack Israel, at least from the Golan. Hezbollah denied these claims.

Given all the background and evidence of Russia-Israel understandings, what does all this mean. It is part of a long, slow, process of the Syrian regime consolidating control with Russian support. The concern for Israel is that although Russia is a stable backer of the regime, one that could guarantee quiet on the Golan, the other allies of Syria threaten Israel. Because the Syrian regime is weak and has come to rely on Hezbollah, Shia mercenaries and Iran on the ground, while relying on Russia in the air (and limited special forces on the ground), the fear is that these other organizations are always present wherever the regime reconquers territory. Israel has a pragmatic relationship with the Syrian rebels, one of mutual interest, there is no deep abiding alliance on either side. But both Israel and the rebels loathe Hezbollah and Iran. The Syrian regime, although it claimed to “resist” Israel, kept the Golan quiet for decades, Assad’s father even admitted to the CIA in the 1970s that it was futile to try to defeat Israel militarily. Hezbollah doesn’t think the same way and it might be in Hezbollah’s interests to try to drag Israel into a confrontation with Russia and try to hide under Russian airpower.

The idea that the Americans have “handed” over southern Syria to the Syrian regime is misleading. The Jordanians play the big role with the Southern Front Syrian rebels and they have to decide what is next. The US wasn’t playing a role in the Golan, at least not a consequential one. So the concept that the US was balancing Russia in the Golan is mistaken. Also the concept that the US in the past five years has worked to interdict Iranian involvement in the Syrian conflict, and that somehow now Iran has “won” in Syria is mistaken. The previous US administration did little or nothing to stop Iran shipping tens of thousands of Shia recruits to Damascus and propping up the regime. Iran was emboldened by the Iran deal and received cash infusions that has allowed it to help Damascus. So the claim that Iran has suddenly gained much in Syria is wrong, Iran has been gaining for five years.

Having Russian soldiers close to Israel’s border is certainly a new phenomenon, but Israel read the tea-leaves on Syria long ago when it comes to Russia. This is why Netanyahu didn’t rely on Washington to send messages to Putin, but went directly to Moscow in 2015 to open a line of “de-confliction” regarding Syria and has since spoken many times with Putin about Syria. Israel knows that going via Washington to Moscow has not helped. So the Russians are coming to the Golan. The future is beginning to take shape there.