In early August I went to Ukraine to cover the Donbas conflict, which is stretching towards its fourth year. Ukraine is in some ways at the frontline of the conflict between Russia and the West. US Defense Secretary James Mattis was in Ukraine in late August, promising support while Russia’s Zapad 2017 exercise is widely seen as intimidated neighboring states. NATO held its own exercise in Georgia on July 31, 2017. Eight countries, including Ukraine, showed up. 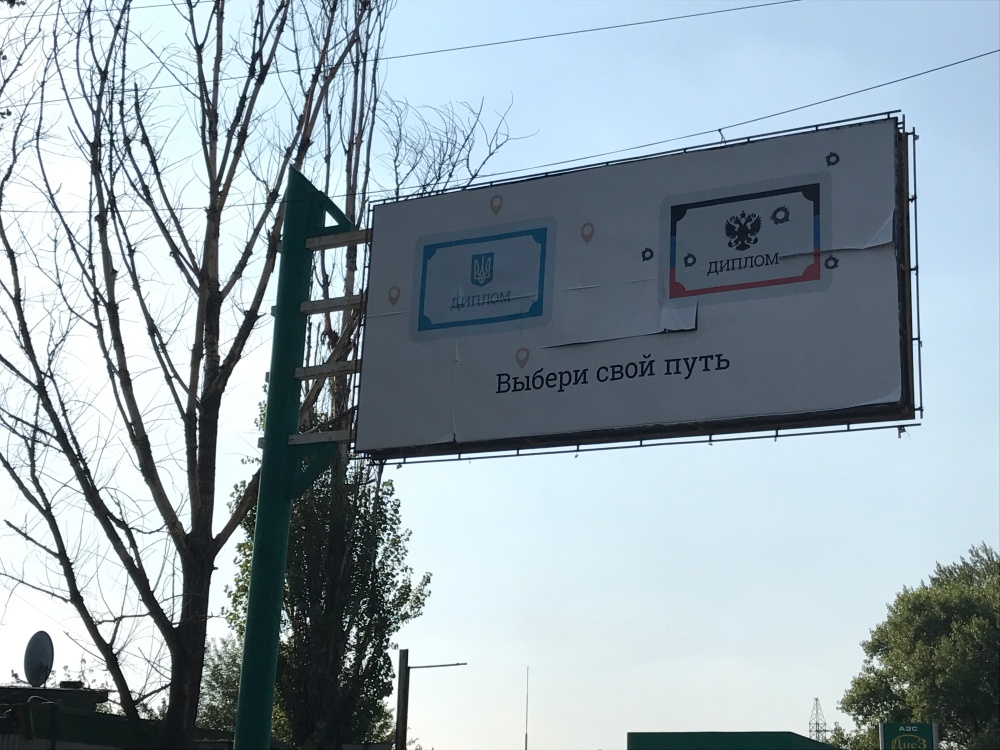 A billboard in Avdiivka asks Ukrainians which passport they want (Seth J. Frantzman)

Over the last two and a half decades Ukraine’s politics have been riven between supporters of Russia and supporters of a more pro-EU and pro-NATO policy. This has resulted not only in deep electoral cleavages dividing east and west, but also political violence. President Viktor Yushchenko famously was poisoned in 2004, and former Ukrainian Prime Minister Yulia Tymoshenko was jailed in 2011 on what seemed like a political trial. Euromaidan protests broke out in November 2013 and lasted until Viktor Yanukovych fled in February 2014. In March Russia annexed Crimea. In April separatist pro-Russian rebels marched into Kramatorsk as Ukraine’s military, stagnating for years under political machinations, reeled. Eventually the rebels were pushed back and Ukraine’s army and numerous volunteer groups pushed into Dontesk airport in July. Volunteer. Ukrainian volunteers, like the “cyborgs” who fought for the airport, became heroes. Groups such as Pravy Sektor also became controversial and a dilemma as Ukraine tried to incorporate them into the regular army.

In the trip to Ukraine, accompanied by colleague Jonathan Spyer and local photographer and fixer Anton Skyba, I spent several days in Marinja, Avdiivka and other areas near the frontline. We spoke with civilians, members of the Donbass Battalion, including a high level commander, and soldiers from the 92nd brigade. In Kiev we also met with journalists, think tank analysts, and a young man from the defense ministry.

The view from Kiev ‘US sanctions give hope to Kiev,’ August 4, 2017 The Jerusalem Post

The Maidan is full of young people dressed for summer. There’s a swagger in the step of the youth, a confidence that belies the difficult economic situation. The Ukrainian hryvnia trades at around 26 to the dollar, a huge devaluation from 2014 when it was about 8 to the US greenback. The World Bank estimates real GDP growth at around 2%, saying that “decisive reforms in the face of unprecedented shocks in 2014 and 2015 helped stabilize confidence.” 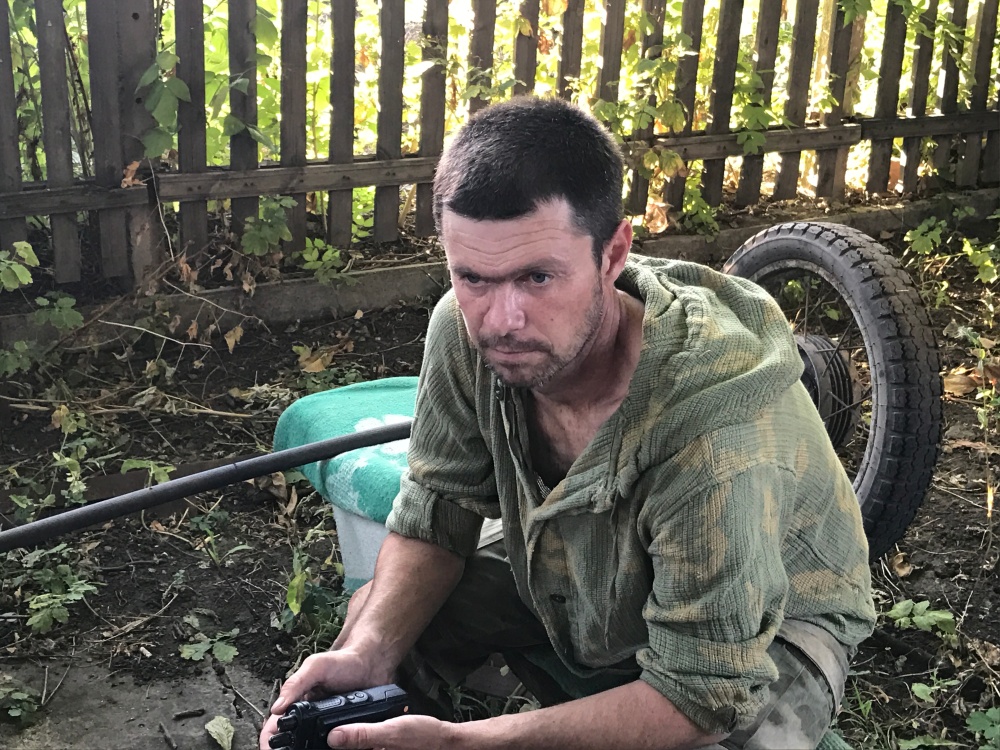 ‘Casper’, a volunteer with the Donbas Battalion (Seth J. Frantzman)

Today, the quiet has returned. But down a near-deserted highway toward Avdivka, checkpoints line the motorway. Men with AK- 47s slung on their shoulders check each car. Non-residents need a reason to be there and foreign journalists must carry a special pink card printed at a Ukrainian army post in Kramatorsk. Three years after the war began and a year and a half after the Minsk II agreements, there is still a low-level conflict going on in the Donbas region of Ukraine. It is a conflict with ramifications across eastern Europe that challenges Washington, the Kremlin and European powers. Read the full report here.

Why the war in Ukraine matters August 12, 2017 The Jerusalem Post

At the next level, this is a conflict for the heart and soul of Ukraine, a country that has sought independence from the Kremlin’s orbit for more than a century. The Ukrainian poet Taras Shevchenko is a popular icon of this movement. His picture graces the inside of a local military headquarters in Avdiivka, and a swank bar in Kiev, among other places. For Ukrainians, especially the more nationalist ones, the war has crystallized the country’s struggle. In dozens of conversations with the lowest level soldiers on the front line, to volunteers and activists and to journalists and analysts in Kiev, almost everyone spoke about the same issue: Ukraine fighting to remove the still decaying elements of the Soviet era and to embrace the West.

Two members of Pravy Sektor at their meeting place in Kiev

Casper, Sniper, Hammer, Owl. These are just some of the nicknames of Ukrainians who volunteered to serve in the Donbass Battalion, a unit formed in 2014 to fight pro-Russian separatists in the east of the country. Peering through a concrete wall pierced by tank shells, he says his men not only face volunteers from the separatist area around Donetsk, but also face Russian soldiers. “There are Chechen war junkies and Russian mercenaries,” among the separatists as well, according to Vyacheslav Vlasenko, commander of the Donbass Battalion. For men in his battalion, this war is personal. Many volunteered in 2014 after the Maidan protests in Kiev forced Viktor Yanukovych, then Ukraine’s pro-Russian president, to step down and flee the country. When a rebellion broke out in the mostly Russian-speaking part of eastern Ukraine, volunteers streamed to fight on both sides.

During the day the fighting is quiet, but at night gunfire is common. Heavier weapons, such as 120 mm. mortars, are also used, say Ukrainian officials. The OSCE says that both sides have committed violations over the years. In a tweet from the OSCE Special Monitoring Mission to Ukraine on August 4, OSCE deputy director Alexander Hug said, “It’s time for sides to listen to the people of Donbass and to cease fire.” Before the war, Alina Kosse was director of a district center for children’s art. She says her town of Marinka was well-known in the area for producing talented youth, including ensembles that performed throughout Eastern Europe. After the conflict began in 2014, many people left their homes and the arts center was closed for a time.

A man holds an AK-47 on the frontline at Marinka (Seth J. Frantzman)

Ukraine’s four years of war and US policy August 23, 2017 The Washington Times

There’s almost a sense Western policymakers are refusing to admit the lack of good options before them. Kurt Volker, the new special envoy to the conflict appointed by Secretary of State Rex W. Tillerson in July, insisted to reporters after a recent visit to Kramatorsk, an hour from the front line, “This is not a frozen conflict, this is a hot war, and it’s an immediate crisis that we all need to address as quickly as possible.”

Two women in Krasnagorovka, a town near the front  (Seth J. Frantzman)

A tour of the front line, Avdiivka  August 31, 2017 The National Interest

The war has provided the impetus to reform the army as well. Lt. Col. Anatolii Stelmakh, a spokesman for what Ukraine calls the “Anti-Terror Operation” against separatists said that the war has created the “conditions for reform . . . we cannot fight using old Soviet standards. We are modernizing ourselves and we want as close to NATO standards as possible.” This translates into symbolic changes, such as having officers study English, or encouraging changes to make noncommissioned officers more independent.

Ukraine’s war, the UK and rumbling on August 20, 2017 The Spectator

In early July, Theresa May and Boris Johnson met with Ukraine’s Prime Minister Volodymyr Groysman at a summit in London designed to show continued western support for Kiev. “Delivering Ukraine’s ambitious reform agenda is not just good for Ukraine but good for the whole of Europe,” Boris reassured his guests. The Foreign Secretary also said the UK was at the forefront of sending a British military training mission to aid Ukraine’s armed forces.

Mykhailo Samus, deputy director of international affairs at the Center for Army, Conversion, and Disarmament Studies in Kiev, says that we should understand Russia’s stance on Ukraine through the eyes of the old KGB: “It is a KGB strategy. . . . They always used different instruments — the military was always only one part. . . . When we go back to 2013–2014, [we see see that] the main goal was to destroy the current Ukrainian state.”