On September 18th, seven US Senators sent a letter to Israeli Prime Minister Benjamin Netanyahu. This comes amidst a dispute over whether there should be an egalitarian prayer section at the Western Wall. On Sunday, according to The Jerusalem Post “American Jewish organizations told Prime Minister Benjamin Netanyahu that he should clarify to US Jewry what is being done to create an egalitarian prayer space at the Western Wall.” Over the last months US Jewish leaders have described the issue as a “slap in the face” and a “crisis.”

The letter is particularly interesting because of the language and assumptions it uses. It assumes that American Jews are Zionists. “The Jewish community in the United States is vibrant and diverse, with American Jews embracing a range of religious and secular identities while also being committed Zionists.” It goes on to say “we urge you [Netanyahu] not to alienate committed Zionists.” However some of the six Senators who signed the letter are not well known for speaking about their Zionism. This is particularly true of former Presidential candidate Bernie Sanders, one of the signatories. He rarely speaks about his Jewishness and certainly does not speak much about Zionism. A recent piece at Haaretz described him as “awkward” discussing being Jewish. “Jews and anti-Semitism in particular felt notably absent,” from a speech he gave about groups facing racism under Trump.

Demanding action at the Kotel, which the US State Department doesn’t view as in Israel

Most interesting is that the letter says the senators are “very concerned by the Israel government’s recent decision to freeze a widely-agreed-upon plan to establish an egalitarian prayer space at the Western Wall.” The letter speaks about “governance” of an “upper plaza behind the prayer areas near the wall.” The letter is addressed to the Prime Minister at “3 Kaplan street, Jerusalem…Israel.” However the US State Department does not view Jewish as being in Israel. In May, when Trump was about to visit Israel, “White House Press Secretary Sean Spicer and National Security Advisor H.R. McMaster refused to clearly answer questions about whether they thought the Western Wall, one of Judaism’s holiest sites, is in Israel,” notes Aiden Pink at The Forward. Mount Herzl, the Knesset, and the Kotel are not views as “in Israel” because according to the Partition Plan of 1947 passed by the UN they were in an “international” territory and their “final status” has not been determined. 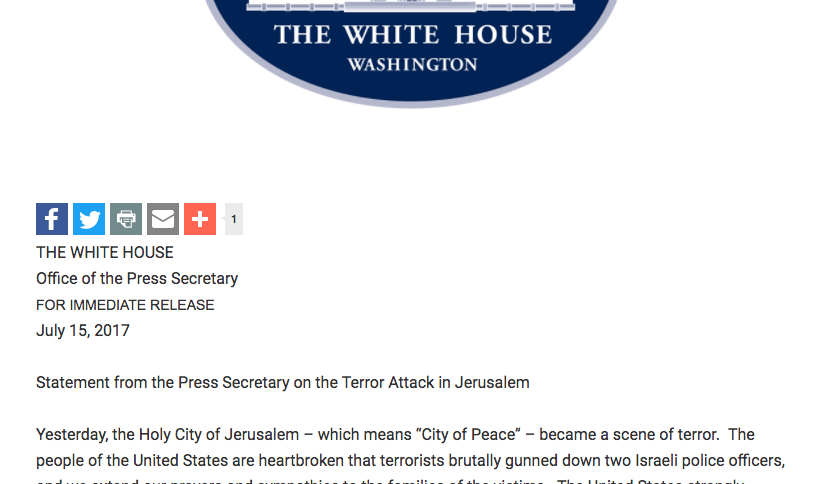 As far back as 1962 the US even worked to encourage other countries not to move embassies to Jerusalem. “As a consequence of this policy, when the Department learns that a government for the first time is contemplating the establishment of a diplomatic mission in Israel, we inform that government of the historical background of United Nations attitudes toward Jerusalem and express the hope that, in deference to United Nations attitudes, its mission will be established in Tel Aviv, where most other missions are located,” a State Department memorandum notes.

For instance a July condemnation of a terror attack says it took place in “Jerusalem” not in “Israel,” although the press release came from the US embassy in Israel, which is located in Tel Aviv. The fact that the embassy is not in Jerusalem is the clearest symbol that the US does not recognize it as part of Israel. The US Supreme Court has also said that Americans born in Jerusalem cannot list “Israel” as a place of birth on passports. “The court ruled 6-3 that Congress overstepped its bounds when it approved the law in 2002. It would have forced the State Department to alter its longstanding policy of not listing Israel as the birthplace for Jerusalem-born Americans,” notes Times of Israel. Studies of US policy in Jerusalem have examined the issue.   Even travel warnings are issued noting “difficulties in the Country Specific Information (CSI). The CSI also provides detailed guidance on crime and safety conditions within Israel, Jerusalem, the West Bank, and Gaza,” noting Jerusalem as a separate entity.

So if US officials have indicated time and against the Western Wall is not in Israel’s territory, from the US viewpoint, why would US Senators urge Israel to make changes at the Kotel? The Jerusalem consulate (known as the Consulate General) has handled US political visits to Jerusalem, the West Bank and Gaza, specifically because of the differences between the Tel Aviv embassy and the special status of Jerusalem.

The Senators know the sensitive nature of Jerusalem well. They have voted on resolutions marking 50 years since the 1967 war and other issues, such as moving the US embassy. Some of the Senators who signed the letter to Netanyahu are among the pro-Israel voices in the Senate. Senator Benjamin Cardin supported an anti-BDS bill, for instance. Senator Ron Wyden also supports it, as does Senator Richard Blumenthal. However Senator Dianne Feinstein has been more critical of what she called Israel’s “brutal land grab law.”

So why are US Senators seeking to change the status quo in Jerusalem when the US State Department does not see the Kotel as part of Israel? Shouldn’t they wait until the final status is determined before mandating Israel make certain changes to the Western Wall? It makes sense for them to demand freedom of religious access in line with the State Department’s own view of religious freedom. But getting into the minutiae of which plaza is where seems to go beyond US policy. Their US Jewish constituents have certain demands about prayer in Jerusalem. However one wonders if they would ask Saudi Arabia to change gender rules to suit local US Islamic demands, or whether US Catholics might get Senators to demand changes at the Vatican? At least in those cases the areas in question are seen as part of the country. It’s unclear if the US Senators’ demands exceed US policy.