A week after seventeen Palestinians were killed marching on the Gaza border, Israel and the Palestinians are preparing for the second Friday of the ‘Great March of Return.’ Hamas and the activists in Gaza have been innovating during the week. They are stockpiling tires and have been using mirrors to distract snipers. Israel has also prepared. UN Ambassador Danon said “The Palestinian leadership had insisted these demonstrations are peaceful, but this past Friday, the world witnessed them turn violent as Hamas and its affiliates exploited women and children as human shields and sent armed terrorists to battle.”

Video from #Gaza shows residents believed to be heading in a convoy toward the border with #Israel as part of the #GreatReturnMarch.

The IDF has also confronted other attempts to cross the border fence with Gaza over the last week and several Palestinians have been killed. Media revealed the existence of a plot by Islamic Jihad to attack Israeli naval ships as well.

The Israeli NGO B’tselem has called on soldiers to refuse illegal orders and warned that shooting unarmed civilian demonstrators could be a criminal offense. It doesn’t appear Israel’s defense establishment has made any major changes to how it intends to confront the protests. The first week it used live fire from snipers as well as other non-lethal means to keep people away from the fence.

In Gaza on Thursday hundreds of Palestinians were seen bringing tires towards the camps established at five locations near the border. Israel has warned bus companies bringing the people that they could face penalties and has claimed Hamas is forcing them. But the videos don’t show that.

A convoy of young men roll into the Khan Younis camp with tires to burn during tomorrow’s protests pic.twitter.com/riXqcRwqDP

According to pro-Israel sites, Hamas is also saying it will pay those who die or are injured. They also claim burning tires is an environmental hazard. In the first Friday of demonstrations more than 1,000 were injured and up to 700 were said to have been hit with live fire, although this was never confirmed. Israel fears the mass burning of tires will be used to mask attempts to cut the fence. Reports claim 10,000 tires have been gathered. It has already been called the “Friday of Tires.” 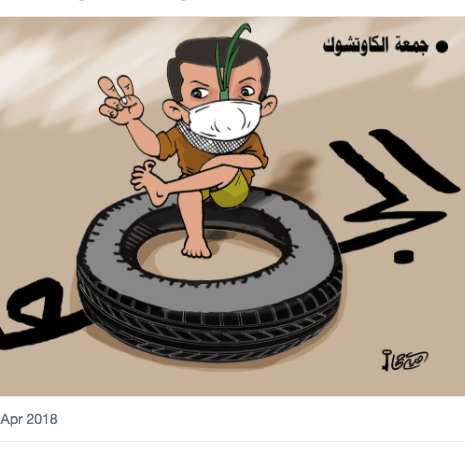 Israel has also reached out to Egypt and Egypt has apparently pressured Hamas to call off the mass campaign. Hamas internal security has provided “recommendations” to the demonstrators. These include: “maintain peaceful activities,” and “avoid friction with Israel’s occupation forces” and also to “avoid distinctive clothes, disguise faces and avoid imagining on modern mobile phones.”