On April 13 Palestinians in Gaza assembled at five protest locations in Gaza next to the Israeli border fence. It was the third week of mass protests. The protests appear to be declining in popularity and Israel’s response has also become more measured. Here is a look back at the three weeks. Overall more than 2,000 have been reported injured and at least 34 killed. 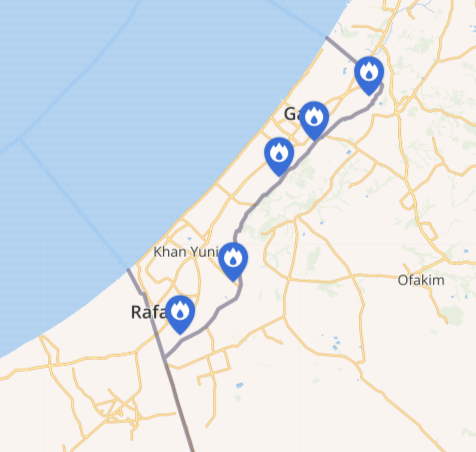 Tensions on Gaza border coincided with Land Day and Passover.

A farmer is killed early in the morning.

Israeli foreign ministry said that Hamas is responsible for any casualties: “Hamas and the other Palestinian organisations who have manufactured this entire campaign”.

IDF: Palestinians are “rioting throughout the Gaza Strip, rolling burning tires and hurling stones at the security fence and at IDF troops, who are responding with riot dispersal means and firing towards main instigators.

Palestinian Health Ministry in Gaza: 1,416 people wounded, 758 from live bullets and 148 from rubber bullets, and the rest suffered from gas inhalation and other injuries.

Riyad Mansour, Palestinian representative at the UN, voiced disappointment that the security council did not condemn what he called a “heinous massacre”

On April 6, Lt. Col. Jonathan Conricus, the IDF’s spokesman to the foreign press and head of social media, emphasized that 10 of the Palestinians killed last week had been active Hamas members.

In lead-up to protests B’tselemn released statement about “why soldiers must refuse to fire at unarmed protesters.”

The EU’s office in Israel called for “utmost restraint” on both sides and encouraged Israel to “respect right to peaceful protest.”

The UN Secretary General Antonio Guterres has also urged on Thursday for “all parties to refrain from any act that could lead to further violence or place civilians, especially children, in harms way.

Palestinians begin burning tires at 10am at five points along the fence. They planned a “day of the tires” as part of the protest to obscure attempt to reach the fence.

20,000 estimated to have gathered at the five locations.

Hamas leader Yehya al-Sinwar, spoke at a protest encampment, saying the protesters “enemy who besieges us.” He said the demonstrations would continue, telling the crowds: “We will uproot the borders, we will pluck out their hearts, and we will pray in Jerusalem.”

Ashraf al-Qidra, spokesman for the Hamas-run health ministry in Gaza, 150 had been injured by mid-day. The spokesman said the number had climbed to 252 by mid-afternoon and 780 by nightfall.

Palestinian Red Crescent: 704 Palestinians were injured, 326 from live fire and 298 from tear gas.

The Hamas-run Health Ministry said 1,354 were injured, of which 491 of the injuries were from live fire

On the eve of the protests the Hamas run health ministry published statistics about total killed and wounded in two weeks, claiming 3,078 had been injured and 30 killed and 1,236 hit with live fire 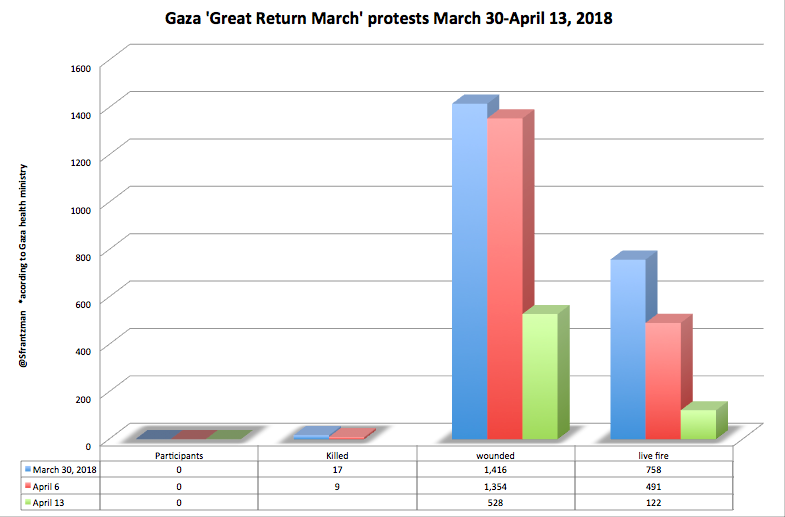 Gazans prepare throughout the night in camps near the border

By 3pm Gaza’s health ministry said 100 had been injured.

Joe Dyke AFP: “Numbers of protesters far smaller than previous week, with few thousands rather than tens, colleagues say. Gaza’s rulers Hamas this week been briefing they want to calm it down for a couple of weeks before fresh push ahead of US moving Israel embassy on May 14.”

Yediot Ahronot’s Yehoshua Yosi posts video of Israelis on the frontline next to Gaza.

Jpost: Palestinians tried to use a “A kite bomb with a Molotov cocktail” during the protests.

Israel Defense Minister Liberman at 5pm: “From week to week, there are fewer riots on our border with Gaza. Our resolve is well understood on the other side.”