New images published by ImageSat International (ISI) show damage caused by Israeli airstrikes in Syria on May 10. The images show relatively limited damage to several sites shown, but they do show that the giant building known as the “glass house” at Damascus International Airport has been evacuated. The images are from May 11, a day after the raid. The first image is from September 2017.

The Glass House has been known in media since 2016. The Daily Mail claimed ‘an is shoring up the Syrian regime from a secret HQ in Damascus nicknamed “the Glasshouse’ – and commanding a huge covert army in support of Assad, according to leaked intelligence passed by activists to MailOnline.”

The article went on to give all sorts of details. “The third and fourth floors are apparently occupied by the Revolutionary Guards’ intelligence unit, which is in overall command of the HQ. These areas are off-limits to even the most senior army officers. On the ground floor there is reportedly a cafe and a 20-bed private clinic for wounded senior military personnel, while the first floor houses the Revolutionary Guards’ propaganda department, rest area and prayer rooms, the leaked intelligence says. The basement contains the counterintelligence and logistics departments and is said to hold millions of dollars in cash. When Revolutionary Guard soldiers arrive in Syria, the HQ apparently issues them a white card containing a special code, which is handed back when they leave.”

This may all be accurate or not. Another article looked at the same building. It had 280 rooms. “A number of departments are based inside ‘the Glasshouse’, including counterintelligence, logistics, propaganda and foreign mercenary command. The Iranian intelligence services, who are in charge of the base, are said to occupy the top two floors. The building is also said to contain prayer rooms, a 20-bed private clinic for wounded senior officers, and facilities for holding millions of dollars in cash, which are reportedly kept in the basement,” notes Israel Defense. It was mentioned at another site as well as at The American Interest.

But when Israel decided to strike Iranian targets on May 10 in response to rocket fire, it didn’t destroy the glass house. Instead a storage facility nearby was hit, a kind of warehouse. The major alleged Iranian investment appears to have been left intact. Yet satellite images and intelligence analysis by ISI show that the building has apparently been evacuated, or at least vehicular traffic has stopped. 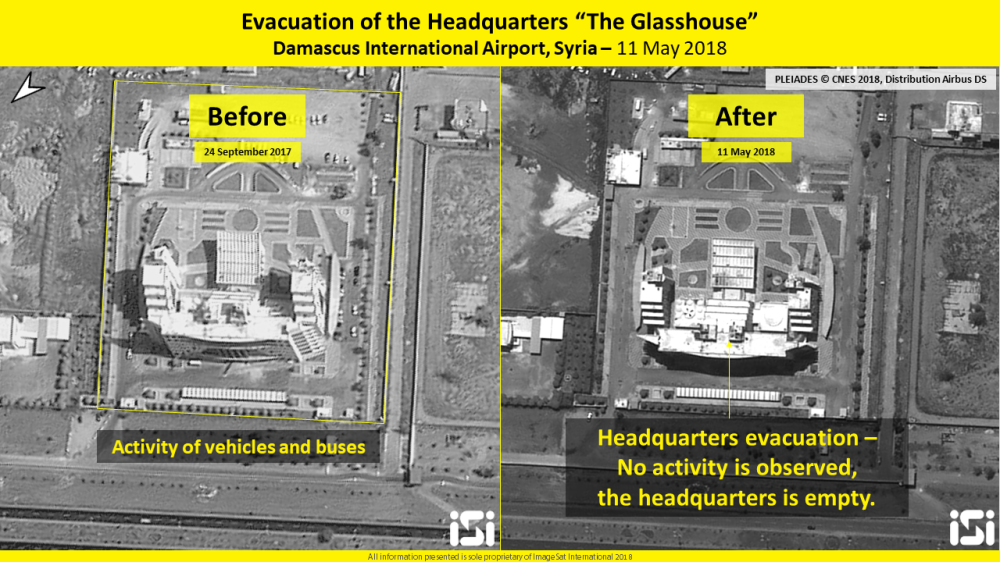 Rendering the building unusable since people are now afraid to use it for fear of airstrikes is almost as good as destroying it. In fact in a kind of Sun Tzu type of way it’s better than having to destroy it. If you can win a battle without fighting it you have done better than had you been forced to do the battle. In this case the Iranians appear to have abandoned a prized possession because of fears of what Israel might do next. That, in a sense, is a true Clausewitz achievement. War is politics by other means. Israel wants Iran to reduce its presence in Syria. Politics can also achieve that, as well as airstrikes. As I have argued, Israel’s use of air power in Syria is a, as the following link notes, a form of diplomacy. It’s a series of messages. You can read my other analysis here on this issue of messaging.