Recently a non-profit educational organization that I help run sought to promote some of its reports on Facebook. Initially there was good response. Videos and links to our articles on Middle East issues got thousands of views.

But then they started being rejected as “political”. An article on Lebanese elections was flagged as political, even though the elections were over and it wasn’t an attempt to influence them, it was an analysis of the electoral returns. We thought maybe it was the image of Nasrallah that got it flagged.

Facebook says “Here’s what’s preventing your ad from being approved: The text and/or imagery you’re using qualifies as political, based on the definition we’re using for enforcement. You can learn more about what qualifies as political in the Ads Help Center. What to do next: You must authorize your Page to run political ads. To begin the authorization process, please visit your Page’s Settings. You can find more information here. Once you’re authorized to run political ads, be sure to select the political ad option. Your ad will run with the political ad header and disclaimer.”

How does Facebook define these adds? “Ads that include political content are defined as any ad that: Is made by, on behalf of, or about a current or former candidate for public office, a political party, a political action committee, or advocates for the outcome of an election to public office; or Relates to any election, referendum, or ballot initiative, including “get out the vote” or election information campaigns; or Relates to any national legislative issue of public importance in any place where the ad is being run; or Is regulated as political advertising.”

So how did my article about the Arab spring violate any of that? It’s not about the US or US elections. It doesn’t advocate for an election outcome, or relate to an election and it is not political advertising.

Since then one after another of our sponsored articles have been labelled as “political” and rejected. 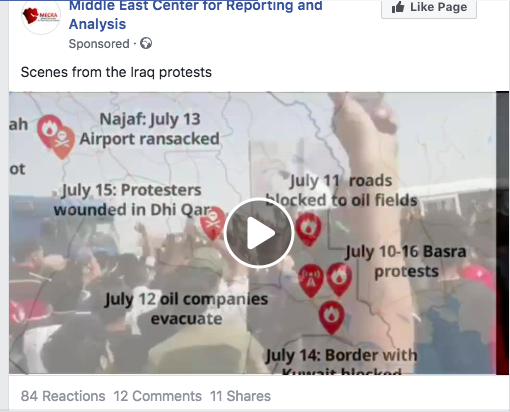 One looked at protests in Iraq. Another was about Iran and Rouhani.

And the latest was about refugee re-settlement policies in Syria.

Why are these labelled “political.” The broad definition has labelled almost everything “political” that has to do with anything relating to policy or current events. What is the “political content” of an article about refugees in Syria and Russia’s policy? It’s not advocating for or against that policy, it’s not relating to an election. Why is a video of protests in Iraq, not impacting any US elections or advocating for anything except showing what is happening “political.”

What’s particularly interesting is that openly political sponsored content actually isn’t labelled political on Facebook. We found numerous examples of sponsored content for politicians in Israel, one even advocating for a new “nation-state” law that had no “political” identification.