The US is concerned that Hadi al-Amiri’s Fatah Alliance will form the next government in Iraq. After it came in second in the elections in May the US seemed set to have to deal with either the pro-Iranian parties or Muqtada al-Sadr. But after three months there have been twists and turns. Now as September arrives the US is concerned. It appears that Sunni parties in Iraq are willing to trade support for Amiri for reducing the role of the Hashd al Shaabi (PMU) in Nineveh. Usually they would oppose Amiri, but he might just find a way to convince them. Abadi tried to countermand Amiri’s orders in August withdrawing some PMU from cities in Sunni areas. This also affects Sinjar and Kirkuk, both areas that the Kurds once controlled until October 2017 and now may be in play due to coalition negotiations.

New revelations about Khazai came out amid political negotiations (screenshot)

Suddenly new reports emerged about the role of Qais Khazali, whose Asaib Ahl al-Haq militia is part of the PMU and thus part of Amiri’s alliance, is part of an Iranian-backed influence operation in Iraq. This was widely known, but new reports at the Wall Street Journal and Washington Post have revealed new details. Michael Pregent tweeted documents from historic US interrogations of Khazali.

In addition on August 31 reports claimed that Iran was transferring medium range rockets and missiles to Shia militias in Iraq. These include missiles allegedly sent to Kata’ib Hezbollah, one of the Shia militias allied with Khazali and Amiri.

It appears the new reports and information suddenly being released is well timed to tarnish the Iranian-backed militias and show why they must not form a government. Of course for those who followed Amiri, Kata’ib Hezbollah’s Abu Mahdi al-Muhandis and Khazali, it was clear the US shouldn’t support a government that includes them. These reports are a clear message. “Iraqi terrorist turned politician told U.S. interrogators he worked with Iran to kill Americans,” says the Washington Post.

Kurds wonder what McGurk is up to with frequent meetings

US anti-ISIS envoy Brett McGurk is reportedly back in Erbil, the capital of the Kurdistan Regional Government, for the second time in August. On August 1 he tweeted “In a constructive meeting today with Masoud Barzani, commemorated memory of martyrs on anniversary of Barzani massacre, as well as recent victims of ISIS terrorists. Also reviewed developments in Iraq and Syria and the next phase in our common fight against ISIS.” He has also welcomed talks between Baghdad and KRG Prime Minister Nechirvan Barzani. He also wrote on August 8 that the “timing of elections” in the Kurdish autonomous region is an “internal matter.” He also denied rumors he met with Amiri.

It would be surprising if it was not an internal matter, and why is it the anti-ISIS envoy’s role to comment on elections in Iraq? Some Iraqis think they know. In the Kurdish region there is resentment over what they see as McGurk’s opposition to the Kurdistan independence referendum last year, and the sudden change in warmth. They suspect that the US wants the Kurdish parties, including the KDP and PUK, to help form a coalition that is more sympathetic to the US.

Meanwhile there is rising opposition to what is seen as US meddling in Baghdad. Hadi al-Amiri of the Fatah Alliance allegedly condemned US “intervention” in late August. Iran’s Qassem Soleimani is generally seen as the foil to McGurk, the Iranian quiet hand trying to manipulate things behind the scenes. In addition local media reported on US “meddling,” claiming the US was trying to create a new Iraqi government.  It’s not the first time the US is seen as getting in too deep in Iraqi politics, despite ostensibly supporting democracy. In 2010 the US was accused of meddling to position Nouri al-Maliki as a “Shia strongman” in Iraq, even though Ayad Allawi’s party had come in first. 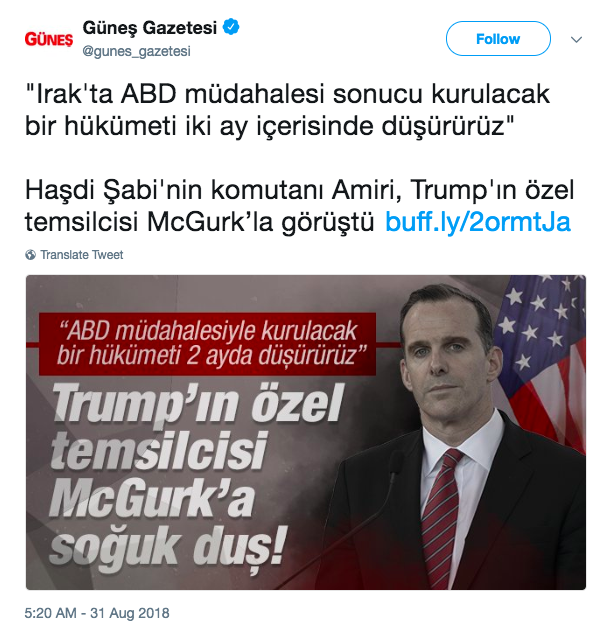 McGurk has stoked controversy, this in Turkish media about his role (screenshot)

From Maliki to concerns over Amiri

Now things are a bit different. The US wants to support parties that are more cold toward Tehran. In 2010 the Obama administration saw Iran-backed parties as bringing strength and stability. As the Iran deal approached that was part of the ethos in Washington. But the Trump administration sees Iran as a factor in instability in the region. A Department of Defense US Inspector General report said in May “U.S. officials reported this quarter that Iranian support to certain Shia PMF militias posed the greatest threat to the safety of U.S. personnel in Iraq, and predicted that this threat would increase as the threat from ISIS recedes and tension grows between Iran and the United States.” The PMF are the Popular Mobilization Forces or Hashd al-Shaabi that were militias called up to fight ISIS and which became official paramilitaries in 2016. The more recent report, released in August, notes “Iran wields considerable influence in Iraq through strong trade and bilateral ties, but also through Iranian support for some Shia militias belonging to the Popular Mobilization Forces (PMF), an umbrella organization of some 50 paramilitary groups. Ameri’s Badr Organization belongs to the PMF, and hundreds of candidates linked to various PMF militias ran in the parliamentary elections.”

The US is clearly concerned: “The Iraq elections posed significant challenges to United States-Iraqi relations. In addition to widespread allegations of fraud, which have delayed the formation of a government while a ballot recount takes place, both of the electoral alliances that appear to have won the most votes are headed by Shia leaders who have at times criticized the U.S. military presence in Iraq or openly courted Iranian influence in Iraqi affairs.”

Not only are US officials concerned, and the Defense Department, but Congress has encouraged the administration to do something about the Iranian problem in Iraq. The new NDAA passed in July and signed in August expressed concern at “the means by which the United States Armed Forces shares operational information with the Iraqi Security Forces and a description of any known instances in which any forces associated with Iran’s Revolutionary Guard Corps have gained unauthorized access to such operational information.”

So who should lead Iraq, according to Washington? Prime Minister Haider al-Abadi who the US partnered with to fight ISIS since 2014 appears to be a US ally and choice. He came in third in the elections. But he is not only weakened, he is also the one let the PMU grow so strong. His sudden interest in pushing Amiri aside is not his usual policy. He did reach out to Saudi Arabia last year, meetings that were brokered with US support. McGurk was proud that Riyadh began flying to Iraq again and Abadi went to meet the Saudis.

But when Tillerson said the PMU should “go home,” Abadi was outraged and told Tillerson in Baghdad that the Shia militias were the “hope” and “future” of Iraq and the region. The US seems to have few choices though. It alienated some Kurds in October 2017 by quietly supporting Baghdad’s offensive into Kirkuk and also by opposing the referendum. The US is loathed by the Iranian-backed militias and it is ironic that Sadr appears now to be a potential US partner. Washington is running out of time and options. Nevertheless it appears that it has succeeded in frustrating plans by Amiri for a large coalition because no such coalition has been signed yet. However Iraq always tends to surprise policy makers. There are a new round of protests in Basra and the uptick in ISIS violence causes concern. In addition a Turkish airstrike in Sinjar and rumors that Iraq wants its forces back at the border with Turkey cause controversy.  And there is the issue of Baghdad’s flip-flopping on Iran sanctions. The US wants Baghdad to support the new sanctions, obviously Baghdad doesn’t want to. And quietly trucks laden with oil from Kirkuk are traversing the border to Iran. 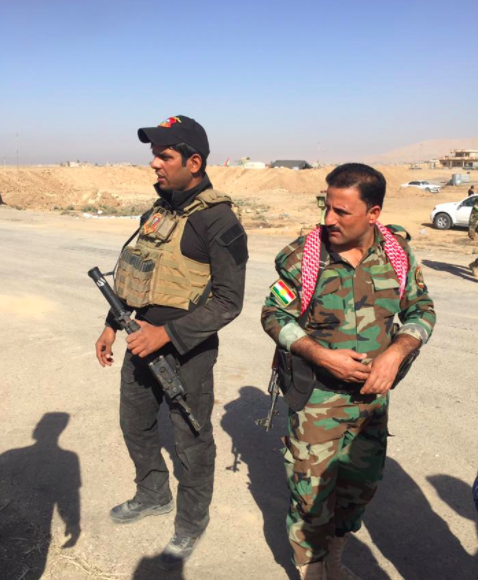 A Kurdish Peshmerga and a member of ISOF during the battle for Mosul (Seth J. Frantzman)

What is the US Ambassador’s role in Iraq amid the negotiations. He has kept a low profile. McGurk seems to have been given a kind of proconsulship to Iraq, with some Iraqis and also Syrians calling him “Bremer” or “Bremer 2.0” in reference to L. Paul Bremer who ran the Coalition Provisional Authority from 2003 to 2004 in Iraq. The problem with Iraq is that it’s not clear who in the US is actually running the policy besides McGurk. McGurks supposed role is as an anti-ISIS envoy. But ISIS is largely defeated in Iraq. Yes, there is a growing insurgency, one the Middle East Center for Reporting and Analysis reported in June and August, but negotiating a new government goes beyond just dealing with the US Coalition against ISIS. The logic of the US Coalition today is that Iraq needs “stability.” That means defeating ISIS, but it also increasingly means rolling back Iran. Yet the US doesn’t have a complete strategy for how to do that in Iraq and Syria.

Iraq and Syria are linked, not just by the ISIS threat, but also because Kata’ib Hezbollah and other militias operate on both sides of the border. The US faces a Catch-22 in Iraq because it doesn’t want to keep working with the IRGC and Shia militias, but these militias are in the government and the US wants to work with the government against ISIS. At the very least what Washington is saying is that having an openly pro-Iran government in Iraq, led by militia leaders and former terrorists, will be difficult if not impossible to deal with and justify.

But in order to save face and get a government that is only slightly pro-Iran, the US needs to find a way to get the Kurdish parties on board as well as the Sunni parties. This is difficult because neither trust the US after many years of seeing what has happened in Iraq. Allawi was betrayed by the US, the Kurds felt betrayed. And now, after the US having worked closely with Maliki, and ignoring the rising Iranian power, Washington is going back to these parties and saying “give us another chance, you have more to lose if you don’t.” But there are other concerns. The Kurdish parties are jockeying for their own local elections and Kirkuk. One of the Sunni parties, led by the Nujaifis, is close to Turkey. That doesn’t leave a lot of room to maneuver. So these articles revealing the role of Iran and the role of anti-American leaders like Khazali and Muhandis are essential to a kind of narrative about a policy goal.