An article on February 17, 2019 in Israel’s Haaretz had a provocative headline “Yemen’s War Is a Mercenary Heaven. Are Israelis Reaping the Profits?”

Explosive details were contained inside:

In September, London-based Al-Khaleej Online published a long article about Israel’s involvement in training Colombian and Nepalese combatants, who were recruited by the UAE for the war in Yemen. The report cites sources in a U.S. House Intelligence Committee who said the foreign fighers’ recruiter was Mohammed Dahlan, who was a member of Fatah’s central committee and head of intelligence in Gaza. Dahlan was ousted from Fatah in 2011 and later moved to the UAE, where he became the advisor of the crown prince and the liaison and mediator between the UAE security forces and Israel. – Haaretz, February 17, 2019

The report also says that Israel set up special training bases in the Negev, where the mercenaries were trained by Israeli combatants. Dahlan occasionally visited those camps, in which the UAE flag was hoisted. The mercenaries later took part in the war on the port town Hodeidah and other fighting zones in Yemen. – Haaretz, February 17, 2019

That is surprising information. The report has already made its rounds. Press TV in Iran has reported it now, based on the Haaretz report. “Israel training mercenaries for Yemen war in UAE camps in Negev: Haaretz.”

In this report Press TV launders the Haaretz report to make it purely a Haaretz claim and remove the reference to Khaleej, which is a way to make it appear more legitimate as if Israel had admitted that this happened. 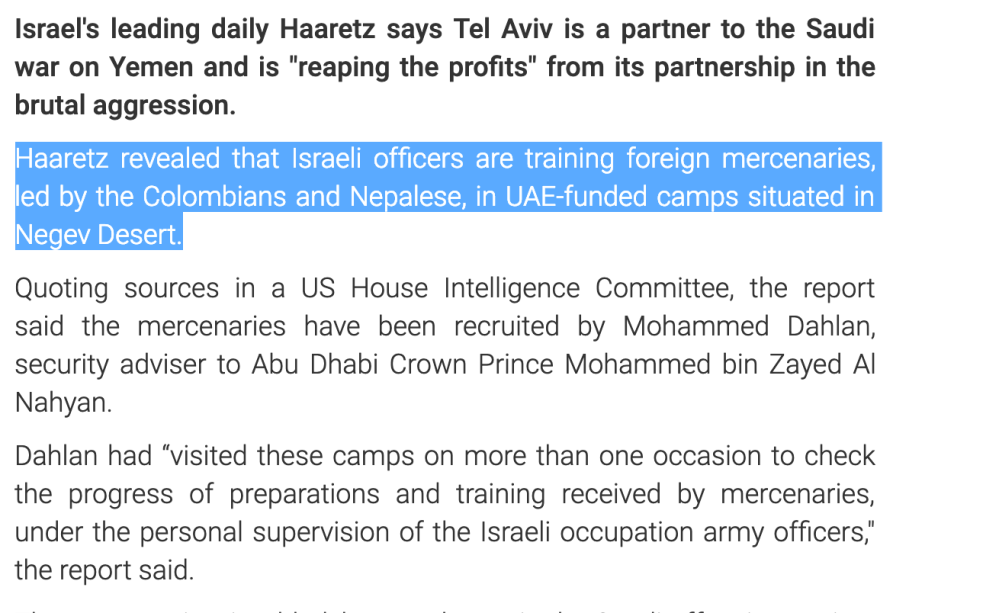 Extraordinary claims about the Negev usually require extraordinary proof, for instance like a source within Israel. Just one source to try to confirm this. Or perhaps a source in the “in a U.S. House Intelligence Committee,” which the article asserted were the basis for this.

So I decided to take a look. An earlier report at Ynet in October 2018 had mentioned that Israelis were working with Dahlan and the UAE. It was based on an article from Buzzfeed.

The popular American news and entertainment website Buzzfeed published an investigative report on Tuesday of a mercenary operation in Yemen that entailed an unusual collaboration between an Israeli-American assassin, the United Arab Emirates and the former head of the Palestinian preventive security forces Mohammad Dahlan. – Ynet October 17, 2018

The October 2018 Ynet report was based on this report at Buzzfeed “A Middle East Monarchy Hired American Ex-Soldiers To Kill Its Political Enemies. This Could Be The Future Of War.”  The Buzzfeed report notes:

Experts said it is almost inconceivable that the United States would not have known that the UAE — whose military the US has trained and armed at virtually every level — had hired an American company staffed by American veterans to conduct an assassination program in a war it closely monitors. -Buzzfeed, October 16, 2018

The report discussed the Dahlan role. “Their host was Mohammed Dahlan, the fearsome former security chief for the Palestinian Authority. In a well-tailored suit, he eyed his mercenary guests coldly and told Golan that in another context they’d be trying to kill each other.” It also mentions a bit of the Israeli connection but notes, “BuzzFeed News was unable to verify parts of Golan’s biography, including his military service, but Gilmore and another US special operations veteran who has been with him in the field said it’s clear he has soldiering experience.” It does not mention the Negev.

So I moved on from the Ynet, Buzzfeed dead end to find out more about the most explosive parts of the Haaretz report.

Because Haaretz provided the Khaleej source I went looking for who mentioned it to see if I could find it. “Mintpressnews” had mentioned this report.

A new report from the Emirati news website Al-Khaleej Online has revealed that many of the mercenaries leading the assault against the Yemeni port city of Hodeida were trained in Israel by Israeli soldiers, shedding light on Israel’s covert role in the war in Yemen. -MintPressNews, September 20, 2018

In their retelling in September 2018.

The report noted that Dahlan had personally visited the training camps in Israel on more than one occasion in order to supervise the training received by mercenaries from the IDF. Al-Khaleej’s sources also stated that Dahlan had chosen the Negev desert as the site for the camps due to the similarities the region shares with Yemen in terms of its climate, environment and tribal structure. – MintPressNews, September 20, 2018

Since they had linked to the report I went to Khaleej. I also found the original by searching (دحلان النقب‎ الخليج أونلاين) :

In the September 19 report they note:

Sources close to the intelligence committee of the US Congress, that hundreds of mercenaries Western financiers Emiratis participate in the attack on the province of Hodeidah Yemen, after receiving intensive combat exercises in “Israel”. Al-Khaleej Online, September 19, 2018

The sources of the “Gulf Online” surprise a high-caliber disclosure of the establishment of secret training camps for mercenaries in the Negev desert located in the occupied Palestinian territories in 1948, after the agreement between the two sides of the UAE and Israel to that, adding that “Mohammed Dahlan visited these camps on more than one occasion to view On the progress of preparations and training received by mercenaries, under the personal supervision of officers of the Israeli occupation army and the flag of Abu Dhabi Crown Prince Mohammed bin Zayed. “The choice was deliberate, because the climate, the desert environment, and the tribal structure that characterize the Negev desert are very similar to what is in Yemen,” the sources say.  – Al-Khaleej Online, September 19, 2018

So who are these sources? It’s not clear. But others published details based on the Khaleej report, including a website called Middle East Confidential;

Dahlan also oversaw the mercenaries’ training by Israeli army commanders in the Negev desert, South of Israel. The former Palestinian official and now MbZ’s protégé according to the sources, visited on several occasions the training camps hosting the paid fighters. The Negev desert the sources told the media was chosen “because the climate, the desert environment and the tribal structure that characterises the Negev desert are very similar to those in Yemen.” Israel and the UAE have no official diplomatic relations but it has been reported that the two countries have been engaged in covert cooperation in several areas, including security, and against Iran.

Some other Arabic websites such as Masa Press also picked this up at the time. I poked around in Arabic (النقب‎ الخليج أونلاين) seeing who else might have quoted it.

The problem is that according to Haaretz the original report cited US House Intelligence Committee sources. There is no evidence that the Khaleej report cited such sources, it rather says sources “close” to the committee. This could be anyone. This also shows the problem of laundering news from one website to another without going to the original sources or even trying to find them.

September 19: “close to the intelligence committee of the US Congress,” – Khaleej

In such a way an explosive and improbable story about Dahlan visiting training camps in the Negev “in which the UAE flag was hoisted” can be created.