The Languedoc FREMM-class of multi-purpose frigate docked in Haifa this week. Its sister ship the Acquitaine took part in the April airstrikes on Syria. Languedoc is in the eastern Mediterranean as part of the usual French mission in the Mediterranean. It is accompanying the Charles de Gaulle aircraft carrier. 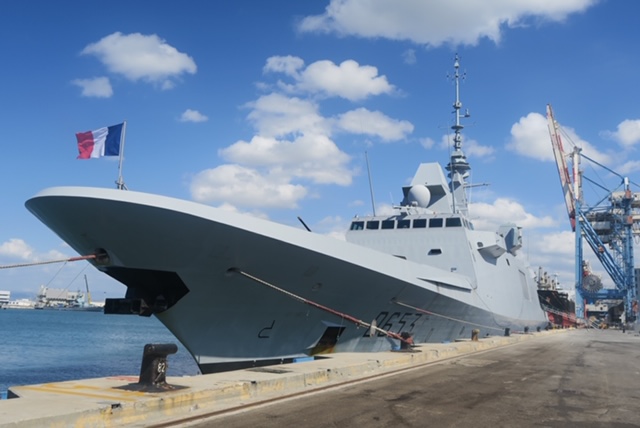 According to a statement by the French embassy in Israel “This deployment was intended to provide support for Opération Chammal, strengthening its air route. The Chammal operation, to which more than 1,000 soldiers are conscripted, is the name given to the French part of the Inherent Resolve combined to provide military support to the local forces fighting in Da’ash in Iraq and Syria.”

Chammal was launched in between September 2014 and 2015 to defeat ISIS as part of the US-led Operation Inherent Resolve. “France and Israel hold intensive dialogue on international issues of mutual interest. Security cooperation is part of this strategic dialogue. In the maritime sphere, it is especially evident when the French Navy ships are anchored in Israel, which create reciprocal exchanges and interactions. The anchorage in Israel is quite common because of its strategic location and logistic facilities offered by Israel,” France says.

The frigate, launched in 2014,  has the most advanced equipment and is a multi-purpose defense tool and strategic asset. It plays a key role in anti-submarine warfare missions. Its high performance, above and below the surface, but also in the projection of its power, make it a frigate capable of performing any task.”

At 6,000 tons, 142 meters long it has 120 crew. It was the third constructed in the FREMM program that began in 2007, a collaboration between France and Italy.

The mission of the aircraft carrier is part 2019 operations as depicted in the above map.